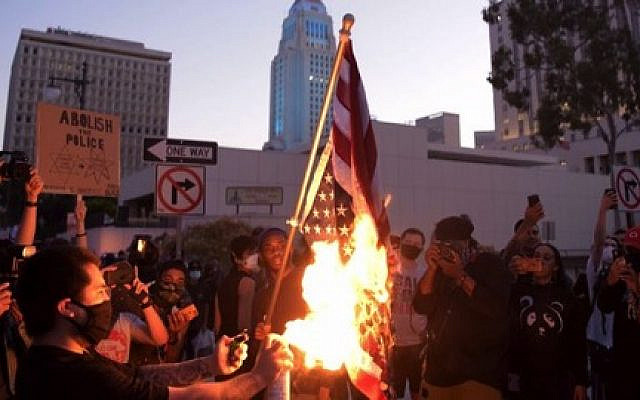 The reckless murder of a black man by a policeman is condemned, but his murder must be investigated by the judiciary system. Racism is condemned in every form and must be fought against in order to be eradicated. But not by force and destroying and burning the flag of that country and disturbing public order.

Is it necessary to set fire to several cities and people’s properties, for this inhumanity that the police did?

After defeat of the Democrats in 2016 US presidential election, and the arrival of the new president in the White House, not a day goes by that, they don’t sabotage and disrupt the new government, they even went so far as to impeach the president, during which he was acquitted. Interestingly, after the new government took office, economic prosperity and declining unemployment were high and significant. In the last few days, the stock market in the United States has grown significantly and more than three million unemployed people have been attracted to the labour market. All these are good signs as the USA is gradually coming out of the coronavirus crisis. Most of EU countries hunger such a prosperity.

The left who, constantly oppose Republicans and the current government, and call themselves supporters of peace and the environment; have failed to bring down the government, they now resorted to anarchy and using Antifa to show their true colour.  The extreme left with the help of Antifa oppose liberal democratic policies and uses anomalous policies in any situation to disrupt public order and creating chaos and destruction to the public and personal properties. In this regard, the Islamic Republic of Iran, which is considered one of the most well-known dictators and anti-human rights in the world, have used all its propaganda media inside and outside the country to promote and take advantage of the situation to resonate their usual cry of death to the United States and Israel.

And what about Europe?

None of the European leaders have spoken out about what has happened in the United States, because they know that if they talk about it, it will backfire as racism and Islamism is a central problem in Part of European countries. Instead, the left, with the help of the Intifada, took to the streets to show solidarity, disrupting various cities and setting fire to public and private property.

The extreme left rallied under the banner of the (Black Lives Matter) for death of George Floyd and in some countries, they attacked the police and set fire to private and public property.

Interestingly, in most countries, large gatherings have been banned due to Coronavirus, but they have taken place without wearing masks or keeping their distance. It remains to be seen how many people will be infected with the coronavirus in the coming weeks.

British Prime Minister, Boris Johnston, tweeted: “These demonstrations have been subverted by thuggery – and they are a betrayal of the cause they purport to serve. Those responsible will be held to account.”

The regime that is itself a disgrace to humanity and is the greatest human rights abuser, was one of the first countries, who was responsible for transferring the coronavirus to the West. Iran sends her correspondents to different countries in Europe to gather reports for internal consumption without going into quarantine.  Former Secretary of State Condoleezza Rice, rightly states; “This is not the Green Revolution in Iran where you killed people wantonly because they wouldn’t agree with the theocratic government.”.

The Mullahs in Iran, who have reached a complete stalemate in all aspects of governing the country, bankrupt economically, internally lost all credibility, and no shows at the ballot box, now collating with the left and (Black Lives Matter) in spreading false news. The supreme leader, Khamenei, has told the national radio and television that in the United States they are massacring people. Khamenei is not even willing to talk about the massacre that led to the killing of 1,500 Iranians last November, many of whom were school children who did not return home. This is considered a 21st century genocide.

Is what really happened in the United States and the death of George Floyd and imprisonment of four policemen and riots in different cities spontaneous, or there an organisation behind it to oppose the valued policies and democracy in the USA? If a police officer commits an act of manslaughter in a country, must they attack the whole world, destroy public and private property, the police?

Why do these groups not take to the streets for the people of Hong Kong?

Why, when so many people, including women and children, are killed in Iran, there are no sign of demonstrations in the USA and Europe? Don’t Antifa and Black Lives Matter consider them as important?