Today is International Holocaust Remembrance Day. The Senate GOP is holding up Professor Deborah Lipstadt’s appointment as US Envoy to Combat & Monitor anitsemitism for political reasons. Why is this happening?

Professor Deborah Lipstadt pointed out that GOP Senator Ron Johnson was endorsing white supremacy when he said, “I would have felt more threatened had the Jan. 6 rioters been Black Lives Matter and Antifa protesters.” Johnson doubled down with his subsequent antisemitic response to Lipstadt.

The senator has denied her and all American-Jewish communities a Senate vote on Lipstadt’s appointment. Johnson is playing politics with vulnerable Jewish people around the world, as are his Republican colleagues, such as Senator Mitch McConnell, by not making a fuss about it.

Three things are obvious: Senators Johnson and McConnell aren’t concerned about Jewish communities, they do not appreciate who Deborah Lipstadt is, while showing they do not take Jew-hatred seriously. I suggest they and others like them look up the professor. And if they don’t like reading, they may watch the major motion picture about her, Denial. The film is about denying Jew-hatred.

Historian, Holocaust scholar, and educator Deborah Lipstadt has written eight important books on this subject. Everyone should read her 2018 book: Antisemitism Here and Now. I use her work in classes I teach and see its power in awakening my students. Lipstadt is a star, but you’d never know it when talking to her. She’s down-to-earth, funny, warm, nuanced, smart and doesn’t make public mistakes on this subject, which is one reason all Jews—whether from the left or the right—admire Professor Lipstadt.

If GOP Lawmakers cared about Jewish lives, they’d allow the vote on Lipstadt’s nomination. It’s not a surprise they’re asleep when it comes to Jew-hatred. Their leader called white supremacists good people just after marching and chanting “Jews will not replace us!” Disgraced former American President Donald Trump drew a false equivalence between those protesting racism and those fighting to subjugate black lives when he said: “You also had some very fine people on both sides.” He then praised the slave owning, treasonous general, Robert E. Lee. It’s hard to hear praise for people who oppose inclusive democracy. Civil Rights expert Eric Ward, not a Jew, understands the epistemology at work when commenting to author Yair Rosenberg that “antisemitism isn’t just bigotry toward the Jewish community. It is actually utilizing bigotry toward the Jewish community in order to deconstruct democratic practices, and it does so by framing democracy as a conspiracy rather than a tool of governance.”  (See Rosenberg’s piece in the Atlantic.) 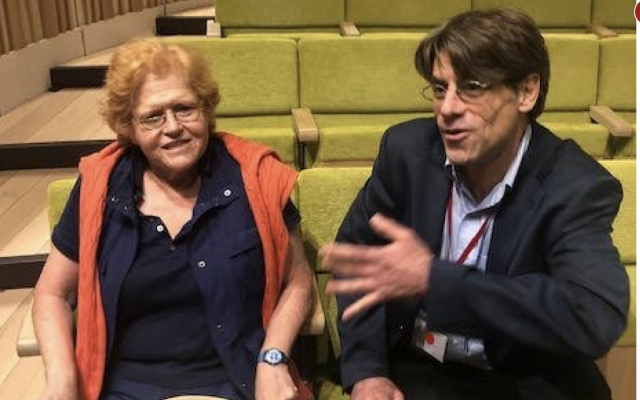 It’s not a surprise to Jews around the world that Republican Senators aren’t concerned with Jewish lives while they shower Israeli Jews with Christian Zionist devotion. It’s not a love we American Jews want because we know it is not love at all, but disguised hatred. Their goal is to ship all American Jews to Israel which they believe is a necessary condition for Jesus’ return. At that point, if Jews remain Jews, that is, we don’t accept Jesus as Lord and Savior and convert to Christianity, we will burn in Satan’s fiery inferno for all eternity. You want to talk about Jew face? Look no further than these GOP Senators who steal a Jewish story and twist it so that we end up burning in hell.

Whether they know it or not, Deborah Lispstadt underlines my point, but it is hard to believe they don’t know who she is: Lipstadt is an international rock star, the most noted expert on Jew-hatred in the world. Senator Johnson is demanding she apologize to him. He needs to atone for what he has done to Lipstadt and, indeed, to all American Jews.

It’s easy to dismiss Jewish concerns about Jew-hatred. We are about two percent of the US population. We are .02 percent of the population of the world. The vast majority of people have never met a Jewish person. Yet, Jews are blamed for running the world. Just a week ago, a gunman took Jews hostage because he believed we ran the world and could free his jailed pal. Never forget the Charlottesville chant: “Jews will not replace us.”

Jew-hatred isn’t like other forms of bigotry. It rests upon an ancient conspiracy that Jews run the world. We don’t, of course. We wouldn’t agree on how to run it. Non-stop disagreement between Jews is a well-known feature of our tribe. Just google: “who do Jews consider Jews?” You will find we don’t even agree on who is in and who is out.

Today is International Holocaust Remembrance Day. If Republican legislators worry about Jew-hatred, they should join their Democratic colleagues to appoint Dr. Lipstadt. Until they do, GOP lawmakers are clearly saying, “We don’t care about Jewish lives.”