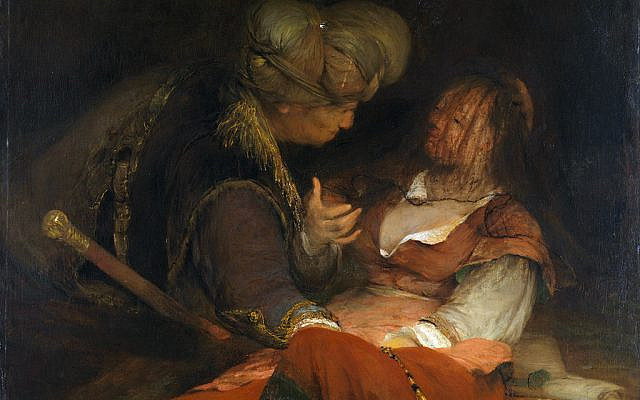 How do the women in the Torah navigate a patriarchal society?

One very rare model is Sarah. At times, Sarah silently follows Avraham’s directions, even when he misrepresents her–twice!–as his sister.  At other times, however, she is surprisingly very direct, particularly when it comes to Hagar and Yishmael: “Take my maidservant!” “My offense is on you… May God judge between me and you!” and “Send out this maidservant and her son!” Avraham listens to her orders and direction because God backs her up. Yet even without knowing that that would be the case, Sarah was prepared to take on her husband directly.

This model is noteworthy because it is such an exception to the general rule. In the society reflected in the Torah—in a man’s society—women could not be direct and speak their minds. If they wanted to push for a certain outcome, they had to do so in indirect ways, exerting their influence while allowing men to be in control. At times, this required resorting to deception because of the power dynamics at play.

In this regard, It is worth contrasting Rivkah with Tamar. Both of them engage in a degree of deception and manipulation, but the outcomes of their actions differ greatly. Rivkah’s ruse– having Yaakov present himself as Esav–led to many years of suffering and hardship. Tamar’s stratagem, in contrast, brought about two children, one of who proved to be the progenitor of the Davidic line.

Why such radically different outcomes?  Ultimately, it’s a matter of what the ultimate goal of such deception was. One deception was intended to make someone do the opposite of what they desired, the other to bring a person to live up to his responsibility, to do what he knew he needed to do all along.  One was meant to dupe; the other was meant to ennoble.

This contrast is accentuated by the near parallels in the two cases. Both Rivkah and Tamar use clothing to misrepresent someone’s identity. Yaakov presents as Esav, and Tamar as a prostitute– hiding who she is, but at the same time not pretending to be someone else. Both use a kid goat. Rivkah does so to further her ruse–she uses its meat to appear as game and its hairy skin to serve as Esav’s hair.

Tamar, in contrast, demands a goat payment, and uses its absence to take possession of Yehudah’s staff and signet ring—essentially his driver’s license and passport—so that he may come to acknowledge his true identity. While Rivkah takes advantage of Yitzchak’s blindness—his tikhena einav, the growing dim of his eyes—to hide from him the truth of who stands before him, Tamar, even in her disguise, sits b’ifetach eynayim, at the crossroads—literally, at “the opening of eyes”—to help Yehudah see the truth: that he had shirked his obligation to her.

Although Rivkah was acting to fulfill the divine prophecy—“The older one shall serve the young”—she did so not just through deception, but in contravention of Yaakov’s will. Even in a patriarchy, where societal norms may not have made it possible for her to impose her will on Yaakov, she owed him the respect and honesty to share this prophecy with him. Perhaps he would have changed his mind, perhaps not. But ultimately, it would have been a clear statement of where his obligation lay. An obligation that she would have been able to help him see if he were not able to do so himself.

Tamar did exactly that. The result of her deceptions was that Yehudah took responsibility for his actions. He publicly acknowledged that he had slept with her, that the child was his, and—most significantly—that he had shirked his obligations to her by not marrying her off to his son, Sheila.

Tamar wisely understood that if Yehudah were to accept responsibility for his actions, it could only happen if she allowed him to do so himself. Any attempt on her part to call him to task would have led to defensiveness and denial. It is for this reason that she presented to him his staff and signet ring and then stood back, giving him the space to step forward.  The critical act of his acknowledgement of his role is captured in one work: “va-yaker,” he recognized, he took his responsibility. This stands in stark contrast to the critical moment of Yitzchak’s deception, where we read “ve-lo hikiro,” and he—Yitzchak—did not recognize Yaakov for who he truly was. Once deception ends in recognition, the other ends where it started—in deception.

It is always best to not engage in deception, to be clear and straightforward about one’s positions and intentions. But it will often happen that a person will find him- or herself in situations that do not allow for such directness. At times this may have to do with gender dynamics, but, in fact, imbalanced power dynamics play out for many different groups and at all levels of society.  In such cases, indirectness may be necessary. Perhaps even a degree of deception, or at least, a lack of full transparency. At such times we must ask ourselves: What are we seeking? What is our end goal? Is it deception or honesty? Do we want to dupe someone or help them see the truth?

One approach is sure to bring conflict and suffering, the other can lead to great salvation—for oneself, and for society as a whole.