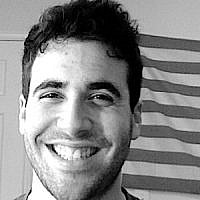 The Blogs
Joshua Rutstein
Apply for a Blog
Advertisement
Please note that the posts on The Blogs are contributed by third parties. The opinions, facts and any media content in them are presented solely by the authors, and neither The Times of Israel nor its partners assume any responsibility for them. Please contact us in case of abuse. In case of abuse,
Report this post.

From where I sit, Jerusalem is nearly 6,000 miles away—and yet I can hear the hopes for a better future for the children of that contested city burning. Yes, around 2,000 people from all walks of life in Israel came out to demonstrate solidarity with the mission of the Hand in Hand bilingual school in Jerusalem. Unfortunately, the school’s burning by extremists on November 29 points to a problem too deep to be reached by a single march or an inspiring chant. It will take hearing a few real and unpleasant things about us to get started bringing about change.

Take for instance, that after the fact, one arsonists mother explained, “It’s disgusting that Jews and Arabs learn side by side…if we didn’t have a country governed by law, I would have done the same.” It’s comments like these that leave a gaping hole where my optimism normally resides.

What needs to be addressed here is a rising tide of racism and xenophobia within Israeli society that goes unchecked. A tendency for ‘Price Tag’ attacks to be tolerated as part of the national dialogue within the country only deepens a prognosis that the patient, by which I mean any prospect for a meaningful introspection, is nigh at death’s door. Politicians–as I mentioned in my discussion of the failings of the Left—haven’t measured up when it comes to dealing with the violence aimed at ethnic and religious minorities in the country. Even if more political figures were to take a page from President Rivlin’s book and preach co-existence, what is missing is a serious effort on behalf of Israelis to look at and critique the way in which the ‘out groups’—Palestinians, citizens with divergent opinions, and other minorities—are demonized.

Meron Bevenisti, a former Mayor of Jerusalem, painted a picture of the situation, saying, “The problem is the privileged condition of the Jewish ethnic group over the others, those defined as the ‘enemies,’ the ‘terrorists.’ You divert attention, so that it is easier to define, and restrict your anger and fight a battle that to me is irrelevant.”

For a number of groups that call the land between the Jordan River and the Mediterranean their home, a lack of discussion and/or real challenges to this condition is an elephant in the room.

It’s time to reevaluate the impulse to shut out and vilify the ‘others’. What is needed is an education system that confronts a nasty history of xenophobia; a system, supported by the government, which realistically supports future generations of children in the hopes of building bridges rather than burning them (or the schools that envision them).

About the Author
Josh Rutstein is currently a Program Officer at the OneVoice Movement in New York City. Josh is committed to an exploration of the personal experiences that shape the Middle East, and vice versa.
Comments