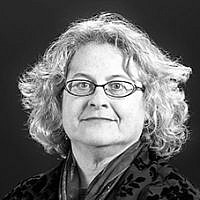 The Blogs
Ellen Portnoy
Apply for a Blog
Please note that the posts on The Blogs are contributed by third parties. The opinions, facts and any media content in them are presented solely by the authors, and neither The Times of Israel nor its partners assume any responsibility for them. Please contact us in case of abuse. In case of abuse,
Report this post.

I was ANGRY! I am still angry. I am frustrated that people believe hatred wins. It does not win.

This wave of anti-Semitism has touched me on several occasions. My sister and nephew were exercising at the Tenafly, NJ, JCC when it had to be evacuated in bitter cold weather. Children and elderly had to walk or be taken to a safe place.

The Jewish Community Center in Kansas has been on high security for over two years now since a horrible instance of anti-Semitic violence led to three deaths. And twice bomb threats have been received this year. I am used to seeing armed guards at the JCC and at our synagogues.

But today was the final straw. Today the cemetery where my husband’s parents and grandparents, as well as his great aunt and uncle, are buried was vandalized. Chessed shel Emeth in University City, Missouri, in St Louis. I am so angry that someone thinks toppling graves is acceptable. I think my anger is intensified because so many of my family have no graves. Their remains are included in the ashes of the concentration camps and destroyed Jewish communities in Europe.

I think I am angry because by destroying graves, they — the haters — try to wipe out out memory. I am always searching in my family’s genealogy, always wondering about who came before and how are we related. So I say to the haters, “It will not happen. We carry each person’s name and memory as a blessing. ”

I contacted the cemetery as soon as I found out to discover the status of our family graves. I was surprised at how quickly I had a response. I was contacted within an hour that Our stones were not toppled.

I want to thank all those who reached out to us. I am glad that the community is coming together to help repair the damage.  Donations can be made to help pay for the damage,. (See link below.)

And I say to those making threats and trying to destroy cemeteries, You will be found. You will be punished. This is not Europe of 1939. This is the United States of America. And you are in the wrong. We stand united.

I am angry, but I believe in goodness.  And I will continue to work with and focus on those who want a better world. I think we need to spread kindness, but we also need to find those who are perpetuating these acts and hold them responsible for their actions. It is just wrong.
If you want to help the cemetery please go to this site.

About the Author
Ellen Portnoy is an active volunteer in the Jewish community in the metropolitan Kansas City area. She serves on the board of directors of Women's Philanthropy of the Jewish Federation and National Council of Jewish Women, Greater Kansas City Section. She has a master's degree in journalism from the University of Missouri-Columbia.
Related Topics
Related Posts
Comments