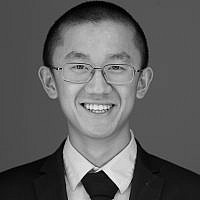 The Blogs
Brian Huang
Apply for a Blog
Advertisement
Please note that the posts on The Blogs are contributed by third parties. The opinions, facts and any media content in them are presented solely by the authors, and neither The Times of Israel nor its partners assume any responsibility for them. Please contact us in case of abuse. In case of abuse,
Report this post.

As the world looks in horror at the unfolding events in Ukraine, it has become abundantly clear that the Western world must come together to economically bolster Taiwan, thus having increased skin in the game, and come up with a plan to quickly sanction China in the event that they attack Taiwan. Israel can stand with Ukraine by standing alongside their allies. Taiwan has no chance against China by themselves, requiring them to have allies both in the defense and economic sphere to back them up. This “deterrence by punishment” informs China that the fallout from any potential invasion of Taiwan would not be worth the economic pain that would surely come their way. Allied countries must create a red line stating that if China were to attack, specific sanctions would be triggered, thus setting clear boundaries demonstrates that the world does not tolerate such actions. Standing with Taiwan is not only the morally right thing to do, but imperative if the world hopes to slow the blight of Chinese expansion and the threat against democracy as an overall institution.

Liam Gibson, an Asian Geopolitics columnist, notes that “Taiwan has a secret weapon that Ukraine did not have – a dominance in manufacturing semiconductors that some analysts say could prove crucial in deterring an invasion.” Taiwan must continue to exploit this “silicon shield,” ensuring that they protect their most valued asset of semiconductors. This would be a deterrent to China who would not want to harm their own technology sector that relies on Taiwan’s semiconductors, along with being a motivator for the rest of the world that doesn’t want to disrupt the overall global supply chain. Taiwan’s shield exists due to their dominance in the field; Taiwan represents 92 percent of the production across the globe for small semiconductor nodes, which are found in anything from phones to car systems (Gibson).

US lawmakers should encourage a symbiotic economic relationship by working with the main producer of semiconductors, Taiwan Semiconductor Manufacturing Company (TSMC), to open US plants that would increase production closer to American technology companies. This would strengthen the economic bond between both countries while ensuring that the US would be able to protect part of the global supply chain should China attack. It is not unthinkable that should China invade, China will look to quickly overtake the factories before TSMC can destroy their own factories and save the proprietary information. A July 2020 military exercise in Taiwan practiced this exact scenario, when Taiwan “mobilized thousands of troops to fight off a simulated Chinese attack on the west coast industrial city of Taichung, home to TSMC’s Gigafab [factory].” In addition to securing the facility in the event of an invasion, the semiconductors themselves can be used as a threat. If attacked, Taiwan could completely halt the trading of such technology to China, denting China’s economy that relies heavily on such products.

Europe can also play a role in any economic defense of Taiwan. Taiwan has already begun making moves that will integrate Central and Eastern Europe with them. With similarities in size of countries and economic development, Taiwan has courted the Visegrad Group’s countries, and “convinced Lithuania to buck diplomatic trends by establishing a Taiwanese Representative Office. When this caused a harsh reaction from China, the EU started a dispute consultation at the World Trade Organization, followed by Taipei establishing a $200 million fund for investment in Central/Eastern Europe.” Other countries should begin to follow suit. While China’s One Belt One Road initiative proves tempting for poorer countries to invite foreign investment in, it is exceedingly clear that doing so has drastic consequences, as China seeks to squeeze these countries dry. Instead, European countries wouldn’t be afraid of standing up to China if they had the backing of an EU investment fund to offset any scaled back Chinese investment.

The fortification of economic ties will be crucial to the safety of Taiwan in the years to come, as the world, including Israel, has increased incentive for a peaceful outcome. By diversifying to other Asian countries such as Taiwan that can offer high quality products for similar cheaper prices, everyone wins. The economic interlocking of the West and Taiwan will only continue to benefit all sides. Ukraine has proven that an attack can come at virtually any point. By having an attack plan ready, the Western world can send a clear message that Taiwan is to be untouched. Allies must seize this opportunity to strengthen economic ties in the face of a disastrous threat, for democracy is truly at stake.

About the Author
Brian is receiving his MA in Counter-Terrorism and Homeland Security at Reichman University in Herzliya. He is serving as an Anna Sobol Levy Foundation Fellow, which brings Americans who are interested in government work to study in Israel. He was born in New York, and received his BA in Political Science at Union College in New York. Having grown up as a Taiwanese-American, he is passionate about military issues that bring together Asia, the United States, and Israel.
Related Topics
Related Posts