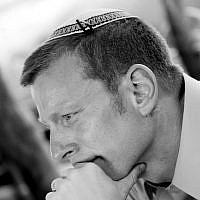 The Blogs
Noah Roth
Apply for a Blog
Advertisement
Please note that the posts on The Blogs are contributed by third parties. The opinions, facts and any media content in them are presented solely by the authors, and neither The Times of Israel nor its partners assume any responsibility for them. Please contact us in case of abuse. In case of abuse,
Report this post.

The response was, for the most part, swift and vitriolic.

Most comments took on the usual breed of internet trolling, including psychoanalyzing me based on the view presented or the city in which I live, dismissing the logical argument presented by alternately calling me hateful or restating dogma, appeals to authority, tautologies, and- my personal favorite- tying my argument to tisha b’av as if legitimate discourse becomes illegitimate for nine days a year. (My favorite were the commenters who condemned my argument as tisha b’av hate speech, arguing that Haredim are God-fearing purveyors of acts of kindness- unlike those terrible Reform Jews. I love irony.)

I was tempted to just ignore the firestorm, because engaging the trolls is never a good idea, but there were also some serious, thoughtful questions and challenges to the case I made. I will address those below.

“You have mischaracterized HUC’s theology”

“How about respecting Reform Jews instead of using them as a foil for making your insular point?”

Before publishing this opinion, I conferred with Reform rabbis to ensure I was not misstating Reform theology. Moreover, as I stated in the article, we believe in inclusivity and an open dialogue. If someone perceived that I was suggesting that either brand of Reform Judaism should be considered less Jewish, let me clearly state that that is not the case. I love all Jews.

HUC is not being divisive when it formulates a theology that is at odds with Orthodox Judaism. It does not need to apologize for having a different point of view and defining for itself the parameters of HUC practice. Why should it be considered any more offensive for Orthodoxy to do the same?

I am not offended by Haredim saying I do not live a Haredi lifestyle, nor Reform Jews stating I do not live a Reform lifestyle. I know I don’t. I choose to live an Orthodox lifestyle because that is what I believe God demands of me. Haredi and Hebrew Union College Jews are welcome to proudly practice their own Judaism. Neither should be threatened by the statement that their Judaism is not mine.

I was calling for definition, not for exclusion.

“Why do you need definition at all? Live and let live.”

“Haredim could make the same argument about Orthodoxy.”

Not only could Haredi leaders make the same argument about Orthodoxy, but they do. Repeatedly. For years now, the Haredi world has not bothered to hide its contempt for any other type of Jew, and particularly Orthodox Jews, as we represent the most dangerous “wolf in sheep’s clothing”- a viable, halakhic alternative.

That’s OK. Really. As long as we are debating the limits of halakha (not calling each other Amalek), Haredim are welcome to choose their strain of Judaism, and consider mine second-class, as I do theirs.

I doubt many of my detractors would bother with any serious response to Reform Judaism claiming to be the authentic heir to Judaism or calling Conservative Judaism sub-optimal. The collective shrug would be deafening. We are only really having this debate, because the facts hit a little too close to home.

We are comfortable defining HUC Judaism as non-torani, loving HUC Jews, and working with them when we have shared goals. We should have the same response to Reforms on the right.

Here are a few of the Halakhot that are violated by the Haredi leadership, if not its rank and file followers.

“וגר לא תונה ולא תלחצנו כי גרים הייתם בארץ מצרים”. You shall not oppress the convert, because you were strangers in the Land of Egypt. Rav Elyashiv retroactively annulled THOUSANDS of legitimate conversions, violating this halakha.

(It should be noted that he did so as part of the battle to exclude non-Haredi views like those of Rav Drukman from the Rabbinic courts. But don’t say that Haredim are out of bounds. Only they get to do that.)

Without spending three pages on the technical parameters of Bal Tosif, suffice it to say that Haredi Judaism has crossed this line, claiming tzniut standards that do not appear in primary sources (and continue to escalate), claiming a universal requirement to learn Torah to the exclusion of secular education or self-sufficiency, invalidating the commandment to participate in a “commanded war” – a Milchemet Mitzva, to protect the land of Israel, and on and on.

It is not coincidental that Rebbi Yossi stated: “Ein Somchin Al Haneis,” we do not rely on miracles.

R’ Karelitz recently ruled that the commandment to return a lost object does not apply to “prohibited” smartphones. Apparently, theft by omission is OK, if enforcing your extreme interpretation of ritual law.

During the Kikar Shabbat riots, the rav of Ramat Eshkol was forced to prohibit burning garbage bins, because you may inadvertently cook milk and meat together. A ritual law reason was needed, because the moral law of “Don’t steal” is insufficient.

The argument has been made that the since Haredim claim to keep the Torah, but have a different interpretation, they can be wrong without being a “Mumar”- an apostate. This same logic would apply to Jews for Jesus, who claim to be the rightful heirs to halakha with a slightly different set of beliefs.

“You grouped together all Haredim as if they are identical. Haredism has many sects!”

“What are the ramifications of this split?”

“Do you count Haredim in a minyan?”

“Will you eat Haredi Hechsherim?”

The anonymous blogger using the pseudonym Ben Chorin has written a VERY lengthy explanation of the sociology of the evolution of chumra.

I’m not going to do it justice, but he describes how we have moved from a shtetl “howdy neighbor” society built on trust and known acquaintances to a global arena which consists of potential, threatening outsiders.

We overcome the inability to distinguish friend from foe by creating a type of currency based on signals or behaviors. Like any currency, a signal must be costly. If waving and smiling were sufficient to engender trust, bad people could easily take advantage.

A college degree is a perfect example. A prospective employer doesn’t know much about you. Why should he invest in training you? How does he know that you will not just quit, leaving him at a critical time for his business? Having spent 4 years, and $100,000 dollars on a college degree is an expensive signal that tells an employer that you finish what you start.

As long as only 25% of the population has a college degree.

But people learned the signals, and over 30 years the percentage of the population with college degrees rose from 25% to nearly 60%. Suddenly, this signal doesn’t distinguish you from other applicants. Today many jobs require a Master’s degree.

This is the cause of Chumra as well.

No longer do I live in a Shtetl where I know who the town rabbi and shochet are, and who is not shomer Shabbat. So from modes of dress, to our level of secular education, to the hashgachot that we eat, we have entered an escalating arms race of stringency culminating with the “bridge burning signal.” A person with a tattoo of a dragon on their face can never be a bank teller. They have burned that bridge. That means that bikers can trust him implicitly because he can never reverse his bridge burning signal.

Haredism has devolved into a bridge burning signal. It is so afraid of outside influences, and driven to escalation of stringency, that enforcing lack education, joblessness, and poverty is the only way to keep the city gates closed, with the peasants trapped inside. This is not the way of Torah.

I try to avoid eating Haredi Hechsherim. This has more to do with not wanting my money to support extremists than the technical question of their fitness as mashgichim.

When an unknown visitor attends my synagogue, I offer him an Aliyah. I do not ask if he keeps Shabbat, or considers himself an adherent of Reform Judaism. Nor do I ask if he learns in Kollel or served in the IDF. Halakha presumes that all Jews are “kosher” until evidence is brought to the contrary.

(It also states that anyone claiming to be a convert should be trusted.)

The same was true 2000 years ago when Judaism sought to ensure that Christianity and Judaism could not be confused.

I do not propose that we begin excluding anyone who wants to participate in Jewish communal life.

Defining the limits of our theology will force borderline adherents of Orthodoxy and Haredism to choose sides. Many of our beloved brothers and sisters who identify as Haredim today will reject the chumra arms race and join a vibrant Orthodoxy that is firmly committed to religious observance while rejecting extremism.