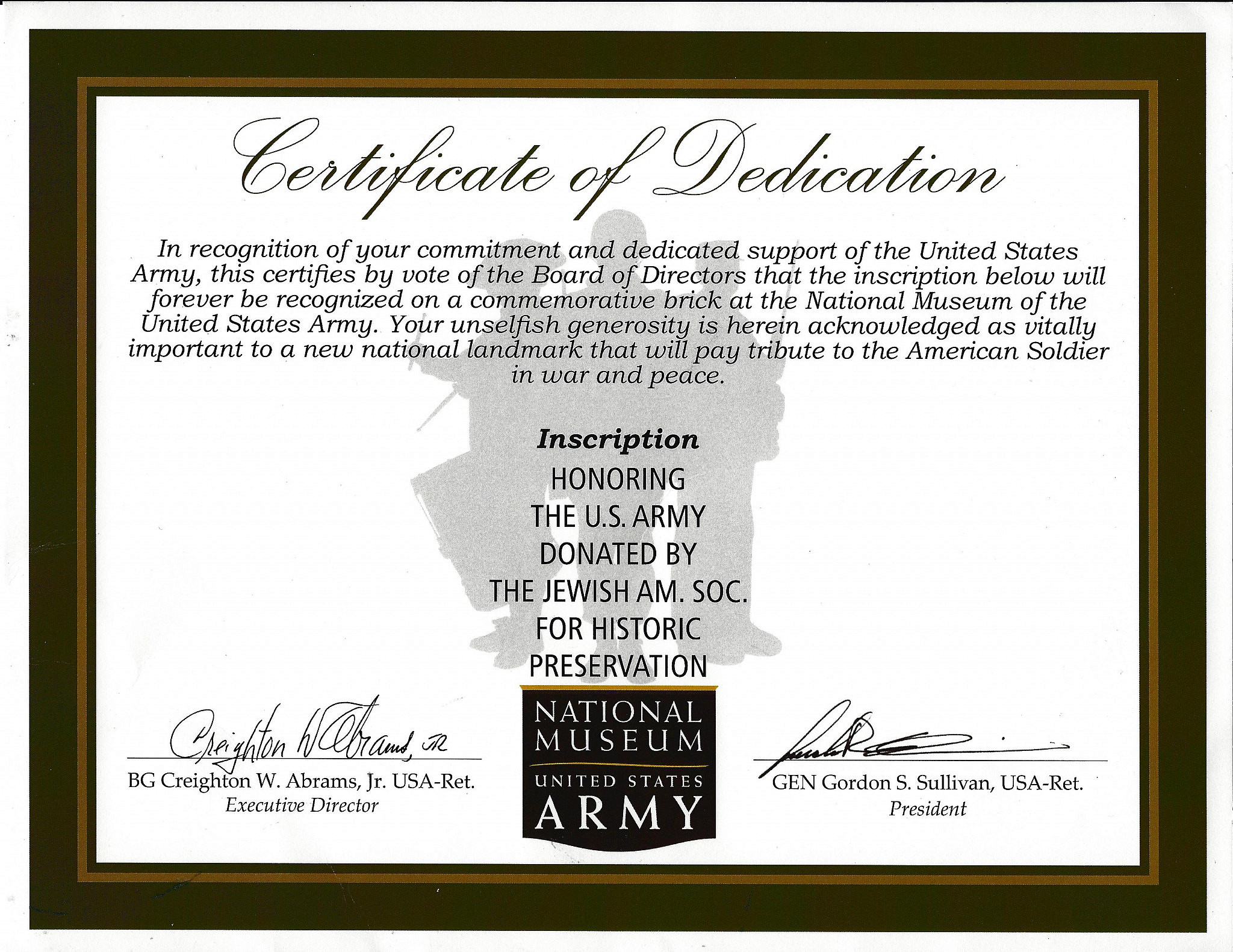 The shutdowns and shut-ins of the Coronavirus Pandemic have puts crimps in all of our lives.  It has not put a crimp or slowed down the rise of antisemitism. From the front lines of my computer, to the future of tomorrow, there are ways for Jews to fight the ancient hatred.

One piece of an effort arrived in the mail this week from the National Museum of the United States Army. American Jews have served with distinction in the American Armed forces. 17 Jews are recipients of the Congressional Medal of Honor.

Twenty years ago, I went on my first visit to Poland to see where my mother was from. She chose not to return to her former home after being liberated from Bergen Belsen. Pogroms were taking place in her former city. She was traumatized, not crazy. She claimed the property just the same with the Russian military authorities. Poland later declared that she, and other Jewish claimants who did not return, had abandoned everything to the state.

At her old house, except for the empty mezuzah alcove carved in the doorway and the fading letters above a driveway entrance a few doors down, saying Beit Holim, Hebrew for Hospital, there was no visible sign Jews had ever lived there.  The memory had been, almost, wiped away.

A Polish lawyer advised me not to bother suing for compensation for our stolen property. He said I would get nothing but legal bills.

Nazism and antisemitic memory did their jobs well.  They needed to erase the memory of Jews. It would make the Final Solution easier.

The physical sight of Jews, their visible testaments such as synagogues, offended their eyes.  The Jews were removed. Those who opposed them were canceled, permanently.

The intellectual underpinning of the Jewish American Society for Historic Preservation was formed.

Their American narratives ring familiar; great, great Aunt Tilly was the Pickle Lady standing on the corner selling pickles to put her son Simon through medical school. Simon’s son, William, moved to California and started the movie business. There is not much more for them worth remembering. They don’t care about Jewish American roots.

“What does that have to do with today?”, they say.

The anti-Semite says they cleared the frontier. The Jew came along later, much later, when it was safe. The Jews risked nothing for America. The Jews stole their patrimony.

With visible symbols of history being destroyed, removed and history not being taught, American Jews are tragically, ignorantly agreeing with the mobs who control the narratives.  The victors will write and teach their history to the young today. The young will be the voters of tomorrow.

What will be the Jewish future if there is no past to learn from?

For more than twenty years, the Jewish American Society for Historic Preservation (www.JASHP.org) has been actively placing historical markers, memorials and creating programs to remember the American Jewish past.

Tiny JASHP has completed well over a hundred programs in 37 states and in five countries.  Close to 7,000,000 people annually see, and benefit from one of our efforts.

What can the Jewish American do about the rise of antisemitism?

The marker projects JASHP does to reflect on American commonality is one option. The donating a brick or paver at a local, community or national historical society is another.  Each marker, brick, paver, etc., that JASHP funds must have the word Jew in it.  The word Jew in the historical narrative is inclusive. It is an affirmative, legitimizing, visible truth of Jewish and American commonality. The American Jew did not get off the boat yesterday.

Every Jewish community, every Jewish individual, does not have to spend the larger dollars that a marker or project costs.  Jews can support their local, community, state of national historical societies by buying a paver for ~$250.  When the credit line is written for the donor, have the word Jew in it.  The Minnetonka Jewish Community, or the Beth Israel Jewish Community, etc.  Let the word Jew be seen in every opportunity of American commonality.

We have every reason to proudly proclaim our American stories.

A marker, a simple paver, brick or dedication is only one-off deals.  But, if done in the thousands, it crushes the anti-Semites efforts to rewrite, to minimize, American Jewish history. It thwarts their efforts to write us and our American accomplishments out of the picture.

Can a single brick or marker really make a difference?

A few years back, JASHP completed a series of historical markers in Deadwood, South Dakota.  The first Mayor, Sol Starr, and many of the stalwart citizenry of the hard fighting, gold mining town, were Jews.

JASHP received an email from a biker who had ridden up to Deadwood from Sturgis with his pals on their Hogs. He wrote to us how astonished he was when he saw the historical marker across the street from the Bullock Hotel – Sol Starr’s lifelong friend. The marker was about the Jews of Deadwood.

My biker interlocutor told me he called his mother, asap.

“Mom, you would never believe it. There were Jews in Deadwood.”

It does not take much to make a difference.  It does take effort.

About the Author
Jerry is the president and founder of the Jewish American Society for Historic Preservation, www.JASHP.org. He is the son of Survivors of Buchenwald and Bergen Belsen. He is a former Yeshivah student and served with the IDF in the Sinai. He is the author of over 100 articles in publications ranging from the Jerusalem Post to the Prairie Connection to the San Diego Jewish World. Jerry is frequently interviewed on T.V. and Radio about the American Jewish experience. The Jewish American Society for Historic Preservation has completed projects in 39 US. States and in 5 countries. Over 7,000,000 people annually benefit from one of JASHP's projects. JASHP has completed seven projects in Israel. Five more are in development. Recently, JASHP completed the first-ever historic memorial to the Exodus in Israel, July 2017. The Exodus was known as the "Ship that Launched a Nation". December 2017, the Machal Memorial in Jerusalem to the 5,000 Jewish and non-Jewish volunteers who came to Israel when they needed her most during the War of Independence, was completed. JASHP is working on five new projects in and for Israel. We expect to have them completed in 2020.
Comments