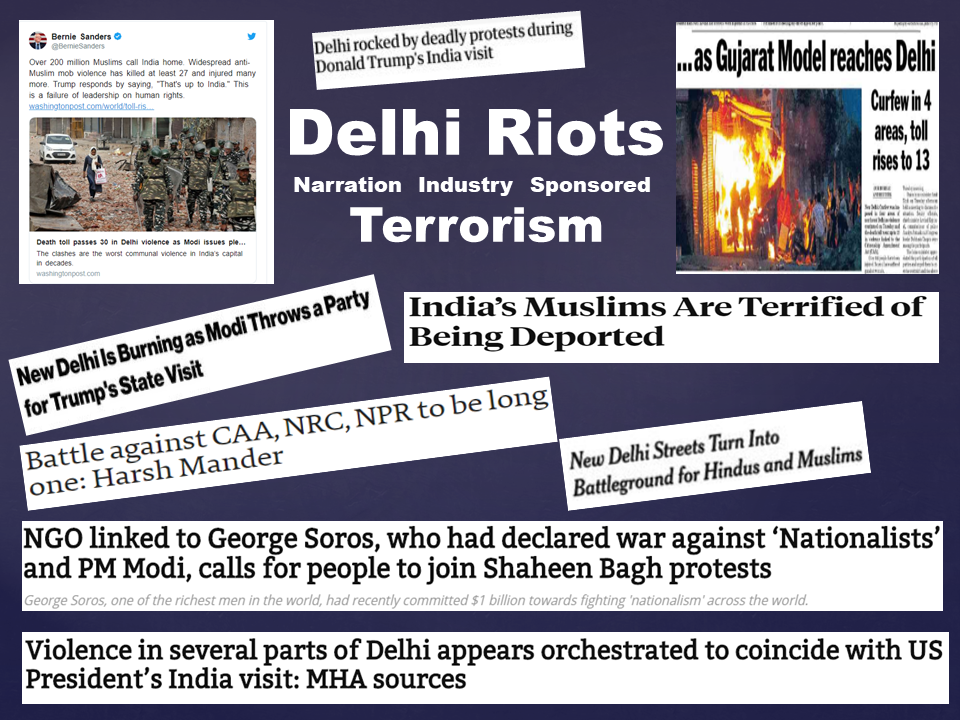 India, one of the most diversified and celebrated democracies of the world is dealing with the ‘Narration Industry’ sponsored terrorism under the name of ‘Anti-CAA’ sentiments. And if there is one country which can understand this current snapshot better- it is Israel, the only democracy of the Middle East, which is fighting the battle of lies, slanders, and conspiracies since its establishment. Those same circles of human rights groups, media and academia lobbies, NGOs and funding channels, wealthy westerners and Islamic networks, which have a long history of targeting Israel, are now more determined to attack India in the battlefields of narration.

At the same time Modi, Trump, and Netanyahu- the leaders of the three vibrant democracies, are the biggest victims of the Narration industry’s experiments too. Only the apprehensions about some positive exchanges between these three leaders provoke some self-declared angels of the human rights, peace, and freedom to straight away wrapping the burqa of Islamic Jihad and to start behaving like the brand ambassadors of the most intolerant idea of the world. US President Donald Trump’s first standalone visit to India was one such occasion.

On 24th February, with the US President Donald Trump’s arrival in India, the escalation of the communal protests (which were going on from December 2019, when Indian parliament enacted the Citizenship Amendment Act), reached to a height which no one anticipated before.  The North-East parts of New Delhi (the capital of India) turned within a few hours into a front line of Islamic Jihad. The aggression and preparation with which the Muslim mobs (equipped with stones, bricks, petrol bombs, and other arms) waged an all-sided attack on the common people and police forces, reflects that a well-orchestrated violent scheme was in place for some specific dates.

The protest is a democratic exercise and an idea that is undemocratic from its core cannot bear it for too long. The so-called ‘Anti-CAA protests’, which ultimately exposed their faces and culminated into one of the nastiest riots India faced, can be seen as the latest blow of Narration warfare. It all started with the leading faces of Islamist ideas and their followers holding copies of the Indian constitution and tricolor flag (Indian flag) in their hands, and where all sorts of shades have been tried to paint the picture in democratic colors from student protests, to women/kids marches, rallies, etc. But the attempts of breeding Islamist ideas with the democracy were bound to fail from day one.

Publicity is the lifeblood of Islamist ideas and it thrives on fake news, lies and misinformation campaigns. Unfortunately, some narration makers from that part of the world are facilitating all this, where these ideas have already caused the maximum damages. Can anyone in the western world imagine a Muslim mob which is gathered around a mosque, which is shouting the anti-establishment slogans, taking instructions from the loudspeaker of the mosque, and which is aware that they will get international media coverage (which made some of them to hold the copy of the constitution and national flag in their hands), to behave differently (and less violently) than what they have done in India’s capital?

There was a time when the world was worried about the marriage of militant Islam and nuclear capabilities but today the ever-growing bonhomie between the narration industry and Islamic Jihad is a much bigger challenge. Interestingly, Iran was competing for the ‘crown’ of militant Islam then and the latest statement of Ali Khamenei (on the Delhi riots) reflects that Iran is competing for the crown of radical Islam even today.

Post-December 2019 (with the passing of CAA bill), the entire narration industry in India dedicated its full efforts in building an environment where anti-democracy, anti-judiciary, anti-parliament, anti-government, anti-police, anti-Hindu and anti almost everything related to the ‘idea of India’ sentiments prevails. As a natural outcome a weave of violent protests, brutal assaults on common people, public transports and government properties, combined with the stones and bricks attacks on police and security agencies have started in some parts of the country.

These events gained momentum when a section of Indian media saw its partners from the West (who holds equal hate about Modi-Trump duo) visiting India to cover trump visit, and they decided to maximize the opportunity. Encouraged with the narration industry’s 24/7 support, the Muslim mobs consisting of women and children started aggressive sit-in protests and road blockades on the model of ‘Shaheen Bagh’ (name of a major road in New Delhi, which is blocked since 15th December 2019 by the Muslim mobs) in other parts of the Capital too. To sponsor this anti-CAA violence a proper channel of funding had been established too. The reports of state intelligence agency revealed that from the last two months networks of Pakistan sponsored Islamic extremist outfits led by PFI (Popular Front of India- an extremist and militant Islamic organization which is banned in several Indian states) were actively mobilizing the funds to sponsor anti-CAA violence in Uttar Pradesh and New Delhi. The report of Enforcement Directorate (ED) of India said that PFI transferred money from its account to several people involved with anti-CAA protests and their networks leveraged messaging, payments and social media apps to the fullest.

From the morning of 25th February, the day when US President Donald Trump was scheduled to visit the Capital, major mobilization of the Muslim crowds started in different streets of Delhi. The North-East corner of the Delhi, where the riots broke out, from kids to elders to women, everyone from the Muslim families was participating in that all-out Islamic Jihad. Several burqa-clad women irrespective of their age took the command of stones/bricks attacks on their hands. It is worth mentioning that these were the same women to whom the Modi government has given the legal ‘Freedom’ from the insensible Islamic tradition of Triple Talaq (a form of Islamic divorce) a few months back. A video of that day had surfaced in which a violent Muslim mob of over 2000 rioters can be seen attacking the Police personnel with stones, bricks, and sticks.

Some of the facts mentioned here can be seen as more of an eyewitness account as I happen to belong to the same locality where these riots broke out. One of the most tragic incidents of this violence was the brutal and targeted killing of an intelligence bureau officer named Ankit Sharma (age 26), who autopsy report states that he was stabbed hundreds of times and his body has been mutilated beyond belief. What kind of message this brutality was meant to deliver?

In parallel to these physical attacks, the narration war against India waged too. Within a few hours (in some cases in minutes) the articles and news reports narrating the brutality of the Modi government on its Muslim citizens and Modi-trump connection with this violence have started flooding in the foreign media as if everything was well prepared to shoot.

INDIA AND ISRAEL SHOULD JOIN HANDS

Islamic ideas’ open tie-up with the narration industry is a matter of serious concern. Democracies like India and Israel will have to fight this out but this time, beyond the social media war rooms. India and Israel, the world two most ancient civilizations and knowledge-based societies, were once the masters of narration culture. Both countries leveraged the power of ideas, human creativity, and imagination at a time when others were struggling for the basics of life. To fight this common battle of narration, both sides will have to build a vision for a parallel narration industry, which can represent our interests and voice more effectively.

During his visit to India, in the ‘Shalom Bollywood’ event, Netanyahu had said: “in the digital age there are endless possibilities for creativity. And I think that if we join forces, magic happens. We can do things that are not even imagined, and these things are happening at a rapid rate. We know, you know, let us do it together.”  Netanyahu also said that “we have a deep cultural tradition that has shaped history, has shaped humanity and has shaped culture for the entire world.” An agreement to establish a framework for encouraging the media products, especially the co-production of films was also signed between both countries during that visit, which is still yet to be leveraged. India and Israel have the potential to drive the current Narration Culture from Noise to Knowledge, and that joint agreement can be a good starting point for building a healthy narration culture.