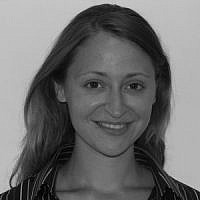 The Blogs
Mollie Gerver
Apply for a Blog
Advertisement
Please note that the posts on The Blogs are contributed by third parties. The opinions, facts and any media content in them are presented solely by the authors, and neither The Times of Israel nor its partners assume any responsibility for them. Please contact us in case of abuse. In case of abuse,
Report this post.

Israel has recently announced that all Eritrean and Sudanese asylum seekers are to be deported to a third country. Officially, anyone who agrees to go to an unnamed third country in Africa within a month can do so. $3,500 will be given to them at the airport in Israel. Anyone who does not leave Israel will be given a hearing to determine their indefinite detention.

The government claims that asylum seekers have only a month to decide. This is unlikely.

Since 2012, the Population, Immigration, and Border Authority has often told asylum seekers that they have a month to decide. In 2012 I interviewed twenty-seven individuals who returned to South Sudan. Most told me that they were given money and a plane ticket that would not be available after a month. But a year later, when I returned to South Sudan in 2013, I met new “returnees.” In true Israeli style, they had ignored the one month deadline back in 2012. They faced no problems returning. When I again returned to East Africa in 2014, I met Sudanese nationals who were told they had a month to accept resettlement to a third country in return for $1,500. Today, the government says all have a month to leave to receive $3,500.

The reason the government announces that time is limited is to encourage return. A deadline creates pressure to decide quickly, and so put less thought into the decision. Furthermore, if asylum seekers decide to wait too long, conditions may improve for them in Israel. There is a possibility that the High Court of Justice will intervene and demand that asylum seekers be given freedom, as it has before. There is a possibility that some will gain a type of special humanitarian protection if faced with very serious illnesses. There is a possibility that some will be given some type of residency. As children grow up, speaking completely fluent Hebrew, some may fight for their rights, and receive them. This is anything but certain, but a possibility, and has happened before amongst other migrant groups. If conditions may improve for even some, then these some will not return in the future. So all are told now, “You have one month to decide.”

Though the government has an interest in saying all have only a month, it certainly has no interest in keeping this promise. To do so would be political suicide. It would be telling the citizens of Israel in a month: “We refuse to help any asylum seekers leave the country.”

Given that it is clear that the one month deadlines usually lapse and are renewed, why do asylum seekers accept these offers?

Some have only been in the country a limited time, and are unaware of just how unstable the government refugee policy is. Others may believe life is good in the countries that they are moving to.

For, the government states that it has heard from others who have left, and they have jobs and healthcare and school in this third country. This is true: there are a very tiny minority of all those who left who are doing well. They have airtime to call long distance to Israel, and tell immigration authorities in Israel that this is the case. They also want to call immigration authorities in Israel and tell them that this is the case. The government is suffering from a painful dose of selection bias: it only knows about those who call them, and not the majority who do not.

In 2013 I met with a small number of this majority. I spoke with seven Eritreans and a Sudanese family of four in East Africa. They had accepted an offer to leave Israel for third countries, but were denied any ID cards when they arrived, and so could not work. Five out of the seven from Eritrea were completely dependent on distant relatives and friends, and they were unsure if this help would continue for much longer. The family of four from Sudan all lacked any income, access to any healthcare, and any schooling for their children. Their only other option was to live in Sudan, where more jobs were available. But when they tried living in Sudan, they were unsafe. One day while trying to live in Sudan, the family was not at home, and officials came knocking on their door. A relative answered the door. Officials told the relative that the family was subject to arrest and should report to the station. Leaving Israel had clearly left the family with two options: live in another African country without access to basic necessities, or live in Sudan, and face possible arrest and worse.

Given that resettlement is extremely dangerous, asylum seekers in Israel should be told the truth: they have a choice in a limited sense of the word, and detention may be the better choice. This is advice that many human rights activists would struggle to give, because nobody knows what the better choice is.

There is possibly no humane future in Israel, but this does not mean there is a humane future in mysterious unnamed third countries. Given the reality, asylum seekers should know they can stay and later leave. This is not ideal, but as Israel refuses to recognize refugees, and there remains no safe resettlement, there is no better alternative.

About the Author
Mollie Gerver is a PhD candidate at the London School of Economics where she researches the repatriation and resettlement of African migrants, asylum seekers, and refugees in Israel.
Comments