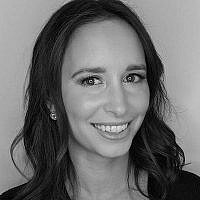 The Blogs
Perri Chaikof
Apply for a Blog
Advertisement
Please note that the posts on The Blogs are contributed by third parties. The opinions, facts and any media content in them are presented solely by the authors, and neither The Times of Israel nor its partners assume any responsibility for them. Please contact us in case of abuse. In case of abuse,
Report this post.

Early in my pregnancy, I had a strong feeling that we were having a boy. I set aside all the girls’ clothes in the boxes of hand-me-downs we borrowed from friends, certain we wouldn’t be needing them. My husband Michael and I spoke at length about the details of a potential bris, and relatively little about our plans for a girl’s baby naming. We did, however, have English and Hebrew names selected for both a boy and a girl.

And it’s a good thing we did. Because on October 26th, 2022, our little girl was born. I was shocked and thrilled. I had said I wanted to be surprised at the birth, and I really was!

We spent our first day as parents marveling over our baby, thanking Hashem that she was healthy, and calling our family and friends to share the good news. We were withholding her name until we could have a baby naming ceremony, which was going to be… well, we didn’t know, exactly.

The Jewish community welcomes baby boys following a centuries-old tradition — the brit milah. But the same cannot be said for baby girls. We had heard that girls should be named in synagogue on any day when Torah is read, and usually within a month after birth. But we weren’t sure where those ideas came from. Were they halakhah (law) or minhag (customary)? We realized that we weren’t familiar with any laws or customs around a girl’s baby naming.

We had spent nine months deciding on our daughter’s name with a lot of care and intention. It was important to us that we welcome her into the Jewish community and announce her name in a meaningful way. And so, we quickly got to work. Between diaper changes, naps, and cuddles, we researched Jewish law and customs to plan our baby naming event — a Simchat Bat (celebration of the daughter).

We were surprised to learn that there are no Jewish laws to guide parents when a baby girl is born. (At least not in the Ashkenazi community — more on this later.) To be honest, we were a bit disappointed.

A bris is a serious event. In his book Becoming a Jewish Parent, Rabbi Daniel Gordis explains that a bris is not ultimately about circumcision. Rather, a bris is about publicly entering a son into the covenant and committing to raise him according to Jewish values – those values which have sustained us and ensured our Jewish existence for the past two thousand years.

To learn that there is no comparable ritual for girls was somewhat disheartening. Aren’t our daughters equal members of the Jewish community? Should we not introduce them and bring them into the covenant with a public and remarkable event?

Women have taken on significantly larger roles in our community over the past 50 years ever since Sally Priesand, the first female rabbi in America, was ordained in 1972. Perhaps in the past it wasn’t as important for Jewish girls to have a formal baby naming since their Hebrew names likely didn’t get much use, especially if they weren’t reading Torah. But in every Jewish community – including those where women don’t read Torah – there is value in parents celebrating the birth of a daughter and recognizing the occasion with a formal naming ceremony. If making a public announcement of our commitment to raise our sons with Jewish values has been critical to our peoplehood, surely we should be making a similar proclamation for our daughters? Because let’s face it – there is no future of the Jewish people without Jewish women.

Rather than be dismayed at our tradition’s lack of defined celebration for girls, we took a different approach. We viewed this as a unique opportunity to celebrate our daughter in our own way, share her name, and welcome her into our community.

As I mentioned before, a Simchat Bat is not a well-defined ritual in the Ashkenazi community. But Sephardi and Mizrahi communities do have a custom called a Zeved Habat, meaning “gift of the daughter.” It’s from this practice that we drew inspiration for our own Simchat Bat ceremony.

With the resurgence of COVID and RSV in our city at the time, we chose to hold a virtual Simchat Bat on Erev Shabbat. It’s a special time of the week for all Jews, but especially Jewish women. There are certain mitzvot associated with Shabbat that are the domain of women, such as preparing the Shabbat challah and lighting the Shabbat candles. Shabbat is also referred to in the feminine, as we imagine the coming of Shabbat like the arrival of a special queen. What an auspicious time to mark our baby girl’s arrival.

We gathered our family and friends online about an hour before candle lighting on November 4th. Our rabbi shared a drash about that week’s parasha (Lech Lecha) and how it related to the significance of naming a child. We played the song Lechi Lach by Debbie Friedman, the great Jewish songwriter. (It was no coincidence that we chose music composed by a woman.) We then had our parents announce her Hebrew and English names with the misheberach below, which we followed with an explanation of her names and our intentions behind them.

Our parents said this misheberach to announce our daughter’s English and Hebrew names during her Simchat Bat.

We named our daughter Hila Ziv הילה זיו – in English, Hallie Ziv. We chose this name to honour the memory of Michael’s Bubbie Hyla. November 4th was Hyla’s yahrzeit, which made it all the more meaningful that we gave our daughter her name on that day.

After we announced Hallie’s name, we prepared a series of blessings to be read by family and friends. We selected these blessings from the Zeved Habat programs in this Dropbox link made available by the Bayit in Riverdale, New York. Below are three of the brachot we recited.

Hatov Vehamaytiv is recited to give thanks for events that bring happiness to the entire community. In traditional settings this blessing is reserved for the birth of a boy, but we believe that the birth of a baby girl merits equal celebration.

Next, I benched Birkat HaGomel. This is a blessing of thanks for making it safely through a dangerous endeavour. It is traditionally recited by the mother at a bris or baby naming after enduring childbirth.

And finally, Michael and I said the Priestly Blessing (Birkat Kohanim) that parents say over their children on shabbat.

While the ceremony was brief (about 20 minutes), it was incredibly special and meaningful. We really felt that our daughter had been celebrated, and certainly not any less than a boy would have been at his bris.

Though our tradition doesn’t mandate a formal birth announcement for girls, we should celebrate our daughters and welcome them into the community in a serious way. We hope that Jewish parents today see the birth of their little girls as an equal opportunity to celebrate. And in a religion that is often known for strict laws and traditions, we invite parents to take advantage of this unusual flexibility to design their own modern Simchat Bat ceremonies for their very deserving daughters.

About the Author
Perri Chaikof is a marketing professional in tech. She lives in Toronto with her husband Michael and their daughter Hallie.
Related Topics
Related Posts
Perri Chaikof