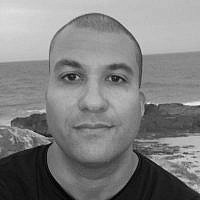 The Blogs
Tunde Reid-Kapo
Apply for a Blog
Please note that the posts on The Blogs are contributed by third parties. The opinions, facts and any media content in them are presented solely by the authors, and neither The Times of Israel nor its partners assume any responsibility for them. Please contact us in case of abuse. In case of abuse,
Report this post. 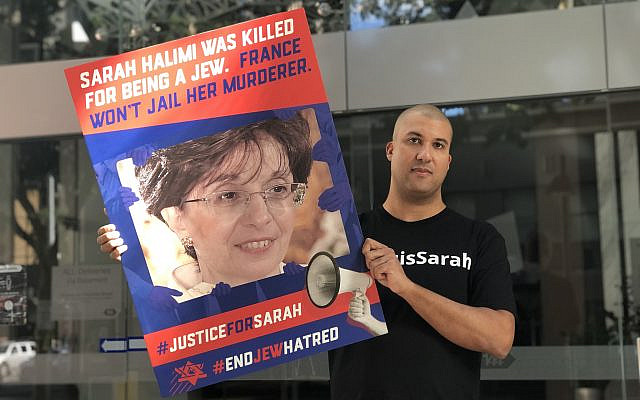 Tunde Reid-Kapo petitioning President Emmanuel Macron and the French Government to reverse the ruling in the case of Dr. Sarah Halimi which freed her murderer, outside the French embassy in Brisbane Australia on May 22, 2021.

The year is 2021 not 1937 and Jews in the diaspora who never expressed an opinion on Israel’s government policy are being blindsided with relentless racial violence camouflaged as a “free Palestine” trope. Jewish Pride author, Ben M. Freeman describes it as a Pogrom. Having to hide David Stars and Kippahs to go safely on ex-Mayor Bloomberg’s New York streets. The pattern is traumatizing. It evokes visceral Jewish pain from the memories of European antisemitism and the escalation in Nazi blood-based policies persecuting Jews.

This blood-based racism is what stopped girls like Anne Frank from going to school, using public transport and forming friendships with non-Jewish children. It led to gas chambers and mass genocide with deportations across Europe of millions of Jews to killing centers.

The Nuremberg race laws, blood-based state policies the conservative scholar Dinesh D’Souza described as a dress rehearsal for the Holocaust, established the framework for this devaluing of a Jewish person’s human worth based on their blood and who their parents are. Words like “Mischling” used to denigrate lives as subhuman and inferior codified on percentages of their hereditary parental blood.

This blood-based racism resulted in the killing of Dr. Sarah Halimi and explains France’s reluctance to jail Sarah’s killer. Centuries-old lies and tropes based on blood-based theories and blood libels, to Charles Dicken’s Fagin and the Jewish rapist in the Nazi film Jud Suess.

In 2000, Reverend Donald Ellis, a pastor in Ohio with KKK ties, refused to marry a white woman and black man based on a very similar “race-mixing” ideology used by the Nazis to denigrate Jews.

Similar to the KKK, in Australia a blood-based White Australia Policy which interned and labeled Jews fleeing Nazi persecution as “enemy aliens”, inflicted untold trauma on biracial children, forcibly removing them from their mothers in “Stolen Generations”, depicted in the film Rabbit Proof Fence. This blood-based racism is a parallel to KKK literature and Nuremberg-style Mischling parallel slurs.

There are not lists but libraries of hatred to attack and exclude biracial people; “half-breed”, “half-caste”, “race-mixing”, “impure blood”, to name four. Indeed in 1987, Maya Angelou, the black feminist icon associated with anti-Semitic Nation of Islam leader Louis Farrakhan, unloaded into the face of my white mother racial hatred at the production of “Moon on a Rainbow Shawl”, while her friend Oprah Winfrey sat in the audience.

I personally am not Jewish and a child of the biracial space. This blood-based racism started while I was inside my white mother’s womb with racist graffiti “nigger breeder” daubed all over my pregnant mom’s door in London 1984, and police-reported bomb threats, perpetrated by UK Labour voting white supremacist males. At Manchester University medical school, I encountered anti-biracial hatred from leftist white students and muslim students.

Through eye-witness observations I’ve seen how blood-based racism drives antisemitism and anti-biracial violence, and how racists cleverly use language and keep their bigotry non-verbal to avoid civil legal challenges and criminal prosecution. By educating children about the trauma of discrimination, we can stop blood-based racism. The day we do that, we can #EndJewHatred.