In our day, it seems more and more difficult to derive di gantza emess, Yiddish for “the whole truth” from the words we see and hear. Sometimes it feels like we are looking through mist, fog, a smoky glass window, searching for an old picture hanging on the wall in a huge room with only a 25-watt bulb to guide us, or trying to decipher our reflection in a carnival’s distorting mirror.

Often, we feel like we need the tools of a good detective or private investigator to discover what’s truly what. The flood and noise of true, partially true, has a taste of or mere tad of truth, or 100% false information inundate our consciousness. The frequency and constancy of this experience — so frequent and constant — is what is known in the Talmud (Ketubot 95b) as “Ha Ma’asim B’Chol Yom” – happening every day. Except that in our electronic and cyber world this happens every hour, and not uncommonly, every minute. When I first began putting my thoughts and notes together, this is some of the sequence that came to mind: 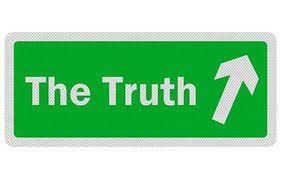 At first, I thought of teachers, and their need to deliver a sermon-like wake-up call to their students. My version: “Teachers, add this subject to what you will pass on to your students: How to differentiate between the ‘falseness’ or truth of what they read and hear. Teach them why Jewishly and ethically it is so important to do so, and give them the tools to analyze everything carefully and meticulously. Teach them which patently and blatantly false ideas and statements are not very important, mere mishigossen, and, at the other extreme, which ones are toxic, sometimes lethal weapons meant to demean and injure other people.”

Having composed the sermon, I realized immediately that this was not only a warning for students, but, to varying degrees, for all of us.

Secondly, what, for some reason, kept sticking in my mind was what some students told me a long time ago about high school debating teams. They described to me that ‘more-than- occasionally’ members of opposing teams would make up quotes and facts that would bring them to Victory (with a Capital “V”). The variously-attributed quote, “Winning isn’t everything; it’s the only thing” kept ringing in my ears.

To me, this practice fostered the perilous lesson that argumentative talent, acuity, and trickiness were acceptable, the truth be damned. It would teach that not only all’s fair in love and war, but also in high school debate, and, in the future, doubtless also in many other areas of their lives. I also sensed that some of the judges knew that this cheating was happening and just let it slide. For both the students and the judges this practice was a serious breach of ethics which might very well carry over long into the lives of the students. (Nowadays, of course, this kind of cheating in debates would never happen. With a laptop in front of them, anyone could check the truth of a quote or facts in a fraction of a second.)

[A side note: In the misattribution of quotes arena — Washington and Lincoln were popular, and in Jewish schools, Hillel, Rebbi Nachman of Bratzlav and Heschel were frequent choices. This is a classic example of the Talmudic principle (Pesachim 112a):  If you want to hang yourself, pick a big tree.]

To focus more sharply on this problem, I needed to create a scale of 1 to 10, #1 being a relatively harmless difference between the truth and fiction, and #10 examples of intentionally and disastrously harmful words could lead to hurt, loss, loss of dignity, and damage to other people. 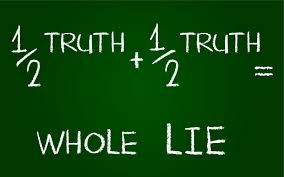 In #1 for example, might be a historian’s research proving that there is no proof that Patrick Henry ever said, “Give me liberty or give me death”. In the Grand Scheme of Things this is no big deal.; #4 would include movie blurbs, since everybody knows it’s fluff and exaggeration; In #6 are political campaign promises, lacking credibility like #4, but capable of leading to terrible consequences; In #7 or #8 would include a troubling tendency among a large number of young people who, to my dismay, believe almost everything they see and read on the Internet; #8 or #9 would be not differentiating between hagiography (a purported biography that interweaves fantasy and myth with little attention to historical fact) and biography.

A personal example regarding biographies: I was in college in the’60’s. At first, we loved President Johnson because he was laying the foundation for The Great Society, a fair, Menschlich America. Then, we hated him passionately because of the carnage of the increasingly meaningless and hopeless War in Vietnam. For some reason, ten years ago those passions about LBJ came back to me. So, I, a slow reader, ploughed through Robert Caro’s four large volumes of his biography of Lyndon Johnson in order to get closer to the truth about the man and the President – how many #8s or #9s there were!

In #10 are the Bernie Madoffs; the straight-faced press secretaries and the highly-paid shameless professional spin doctors (Vey iz mir –“doctors!” – A debasing of the term. As a child, a doctor was a member of The Noble Profession),; the scammers of every stripe and ilk who prey on vulnerable people through snail mail, phone, and the Internet; The Bad Geeks – malware creators, hackers, Photoshop manipulators, and cyberthieves who want nothing more than that you and I “CLICK HERE” so they can empty our bank accounts; conspiracy theorists; human traffickers (what adjective? Dastardly? Loathsome? Despicable? Evil!); and unabashed 100% racists posting their grotesque websites dripping with venom and hate.

What the ones I have listed in #10 have in common is malicious intent. The extent of suffering they cause is only a matter of degree and largely a factor of their personal power. The end result is not mere “mischief”. Their words lead to very real injury and destruction.

After my rather lengthy introduction to this subject, what Jewish comments do I have to offer? I have only three: The first is an insight by the late Professor Saul Lieberman, considered the greatest Talmudic scholar of the 20th Century. He explained that, if in the text (e.g., Avoda Zara 22b) someone said, “I saw”, the person was only saying it to emphasize a point, and it was not always to be taken literally. This is similar to a child saying, “Cross my heart and hope to die.” It might be good for us to constantly keep in mind the “I saw” word of Torah when we are evaluating the truth, near-truth, half-truth, or pure falsehood of what we hear or see. 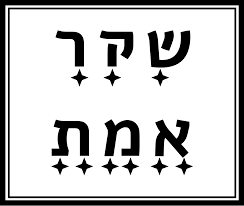 Second, the Talmud (Shabbat 104a) notes something interesting about the sequence and configuration of the Hebrew words Sheker (Shin – Kuf – Resh) – Falsehood and Emet (Aleph – Mem – Tet) – Truth.

In the Hebrew alphabet the letters of Sheker (Falsehood) Shin-Kuf-Resh are all bunched together alphabetically, whereas Emet (Truth) Aleph-Mem-Taf has the first, a middle, and the final letter of the alphabet, a sign of greater stability.

The meaning can be seen easily by just looking at the shape of the letters: With Emet א – מ – ת Truth,  we see that it is completely stable since the bottom of all three letters are firmly on the “ground”; in sharp contrast, the word Sheker ש – ק – ר  Lies which has only the single downstroke of the  Kuf ק which makes it stand wobbly and unsteady on a single leg.

My third thought, based on Psalm 85:12, is much more abstract:  Truth springs up from the earth; justice looks down from heaven.

I would reverse the two halves of the verse and understand it this way: if we earth-bound human beings stay aware of our higher (Heavenly) Jewish ethical and moral values and apply them to the assault of information we are subjected to, then we will be better able to determine di gantza emess sprouting all around us. This is concisely and precisely what Shakespeare’s Lancelot states in Act II of The Merchant of Venice, “The truth will out.”