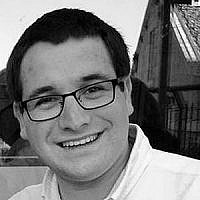 Many American Jews under the age of twenty-five, who have gone on extended organized trips to Israel, may be familiar with the Israeli exhibit known as “Dialogue in the Dark.” This exhibit, housed in the Israel Children Museum in Holon, is an interactive simulation of what it is like to be blind – it is literally a dialogue, in the dark. Within the darkness of this museum, visitors have the unique opportunity to experience what it is like to be blind, followed by the opportunity for dialogue.

Contrary, to what happens when visiting the “Dialogue in the Dark” exhibit, I am proud to have initiated dialogue after coming out of the dark. That is, after two to three weeks of darkness on Muhlenberg College’s campus, the Muhlenberg College Hillel community, in addition to the larger Muhlenberg community, has emerged in a much better place.

Let’s take step back and explain.

For those who do not know, Muhlenberg College is a small liberal arts school in Allentown, PA, and it is home to approximately 700 Jewish students; one third of the overall student body. Approximately one month ago the Muhlenberg Hillel President resigned from her position, and in the days that followed she published an Op-ed explaining why she was stepping down.

In her letter to the Muhlenberg community she cited her involved with an organization known as Open Hillel, her attempts and plans to bring their speaking tour –“A Conversation with Jewish Civil Rights Veterans”– to Muhlenberg, and she accused Hillel International and Muhlenberg College of various transgressions against her and the greater student body.

The same day the article was released, there was an organized gathering of approximately one hundred students, of various viewpoints, who came together under several pretenses, including: expressing interest in “Discussing the Israeli/Palestinian conflicts;” “Informal conversation about the framework of this [the Open Hillel speaking tour] event;” and “For the purpose of starting a discussion and thinking critically.” (All quotes in the above paragraph are taken directly from the description of the meeting on Facebook).

A large part of the meeting focused on the article that had come out that morning, and on the feelings students had regarding not having a platform to discuss the Israeli-Palestinian conflict on our campus. Furthermore, a major point of concentration was the idea of sparking dialogue, and that the speakers that were being brought to speak at Muhlenberg College would allow students to engage in thoughtful, and open conversation about the conflict. All in all, the conversation was confusing, and unpleasant. In essence, the community failed to have a conversation about having a conversation.

The respective articles can be found here:

http://www.muhlenbergweekly.com/news/view.php/863270/The-Real-Hillel-Pull-Up-a-Chair- (later published on The Times of Israel)

The event itself is not something I truly wish to address, but I will touch on it briefly. A day before the event my friend pointed out the following, “Speakers are not for dialogue. Discussions are for dialogue.” In this case, I only partially agree. The program itself provided the opportunity for only about five-to-ten students to pose questions to the panel of speakers – there was not, and was never an intention to have, a conversation about the Israeli-Palestinian conflict at the event. Moreover, the Open Hillel presentation did not present diverse perspectives, nor did it provide students with an opportunity for dialogue, but it did serve as the catalyst for conversation under Muhlenberg College Hillel’s roof.

Throughout the week I had been working vigorously to defend the integrity of Hillel (I touched on this extensively in my article for the school paper), and I had been planning a program that would serve the community in the way that I saw best. Thus, I believed that after several weeks of negativity and stress, we were finally emerging from that blanket of darkness and attaining true dialogue.

Friday night, after our regular Hillel Shabbat dinner, I facilitated a program that I entitled: “Perspectives, Pluralism, Peace: Discussing the Israeli–Palestinian Conflict in a Responsible, Diverse, Respectful, and Safe Manner.” It was a huge success. The participants were incredibly diverse; there were Hillel regulars, non-Jews, liberal Jews, Conservative Jews, Jews of various observances, and Jews who did not have any background on the topic. The results were marvelous.

For the first time since I had been a student at Muhlenberg College, the Muhlenberg community had engaged in a dialogue that allowed participants the unique ability to share their feelings, thoughts, concerns, and questions, in regard to the conflict, with their peers. Yet, at the same time, there was no judgment, and no opportunity to respond or attack. Each individual could share whatever he or she wanted, no matter what perspective they held.

Hillel International does not censor students’ free speech or their ability to share ideas and thoughts. Rather, they provide college students, Jewish or not, with the opportunity to engage in an environment which allows for thoughtful, expressive, and ideologically pluralistic dialogue and exploration.

From the darkness that had overtaken Muhlenberg in the previous weeks, dialogue materialized on our campus this past Friday night, allowing the community to finally find luminance.

Although Open Hillel claims to provide their participants with dialogue and a plurality of attitudes, they fail to do just that. In contrast, Hillel International, by administering a true open door policy, provides students from all walks of life the opportunity to have dialogue with each other and with different ideals. Hillel International partners with JStreetU and AIPAC, and engages with Pro-Palestinian and Pro-Israeli students alike – Hillel does not provide a single perspective, rather they construct a platform for an assortment of diverse ideas and outlooks.

Looking towards the future, I have one more semester on Muhlenberg College’s campus left, but I plan to continue pushing this community to converse about the conflict. As the incoming Muhlenberg College Hillel Executive President, I will continue the work that I started last Friday. This topic of conversation under Muhlenberg Hillel’s roof and on the greater Muhlenberg campus is far from over – that is a promise.

It may be a hard discussion to have, and it will surely have its ups and downs, but college is all about learning from your peers, and learning about yourself. We at Muhlenberg College Hillel and the greater Muhlenberg community are going to support each other, and continue to promote and partake in programs that encourage composed, diverse, and healthy dialogue about the Israeli–Palestinian conflict.