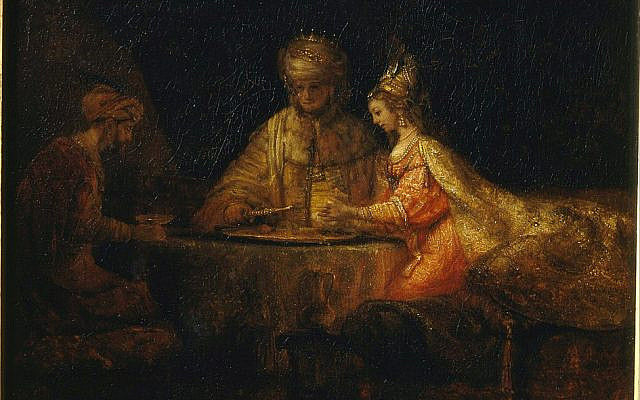 Why does it take Esther two private parties with Achashverosh and Haman to make her request for the Jewish people? Why have a party at all? Why was it necessary to invite Haman to this party as well? Why are we informed of Zeresh and Haman’s advisors’ seemingly clairvoyant anticipation of Haman’s impending downfall (Esther 6:13)? What would be lost from the story had this event not been included in the Megillah?

There have been many suggested answers to some of these questions, but none to my knowledge weave within the literal story and relate to each other cohesively. For example, Rabbi Yonatan Eibeschutz  offers a midrashic explanation that idols in the room hindered her plan, however this does not derive from the text nor does it explain why a party was even necessary nor why Haman’s attendance was necessary.

The Talmud (Megillah 15b) lists multiple reasons for why Esther invited both men to the party. However, none of them satisfactorily explain the necessity for the party and its participants as well as the need for two parties. However, the explanation suggested by Rabbi Yehoshua ben Karcha begins to shed light on the scene. He suggests that Esther’s plan was to implant in the mind of Achashverosh jealous suspicion between Haman and Esther, potentially leading to the death of them both. This idea lends the most insight but fails to completely develop the idea and explain the complex web of events.

Megillat Esther, like all biblical texts, is succinct and subtle. This subtlety is perhaps most apparent in Megillat Esther as its publication within the diaspora could have led to political and material consequences for the Jews should it be deemed disparaging by the ruling class. Should the king or aristocracy of Persia learn of Esther’s manipulations of the throne, the consequences would have been dire. Therefore, the text must conceal its more controversial components. The attentive reader might glean insights from the text via a sensitivity appreciation for the human kinematics and stratagem disguised within the otherwise mundane details of the story.

Esther knew that what she was going to request of King Achashverosh would be quite shocking. Haman was the king’s most trusted and closest advisors. The text gives us no hint that Achashverosh had any ill will towards him or was likely to develop any in the near future. Esther likely had a wide spectrum of anticipated possible outcomes should she de novo approach the king with her claims. Achashverosh could completely reject her claims and side with his trusted advisor, possibly even resulting in her death. He could believe her but choose to do nothing, opting to keep his advisor happy and accepting the presence of an angry wife. Or, at best he could listen to Esther and choose to save her people with or without the execution of Haman.

Aside from the personal risk she took upon herself to approach the king, she was also taking an incredible political and social risk challenging such a powerful political entity. Should she fail, the fallout of such an aggressive maneuver would be devastating for her and the Jewish nation. Especially considering Haman’s decision to destroy the Jewish nation derived simply from one of their leaders refusing to bow to him (3:5-6), a fortiori, should one of their leaders seek to destroy him. Esther didn’t simply need to inform the king of Haman’s plans. She had to ensure she did not offend the mercurial king. She needed to invoke adequate enmity against Haman to suppress his influence as well as ensure the king executed Haman and those involved to prevent reprisals. All the more so, should she fail and the general population learns of Esther’s attempt to manipulate the king to kill such a lofty political entity, the public would distrust the Jewish nation and develop suspicions of their conspiracies to connive control. A trope all too familiar to history.

Esther knew that she needed to stack the odds in her favor. She understood from the king’s history, specifically the story of Vashti, that he is capricious but conveniently pliable with wine. Therefore, Esther’s best chance of swaying the king would require manipulating him to get drunk and somehow tilt his favor from Haman. This is why Esther didn’t simply request Achasverosh save the Jews when she walked into his chambers the first time.

If the king accepted her invitation alone then Esther would have him drunk but severing his favor from his most trusted advisor would take significant convincing.  Esther understood the base nature of the king, making jealousy and paranoia the most likely successful strategy. This is why Esther invites only the King and Haman; planting a tiny seed of suspicion that Haman and Esther could be unfaithful. Her plan could have been sufficient with only a single party. Esther likely only planned for a single party, however she realized during that party that the idea did not implant on the mind of the king. Although the king was drunk, he was not yet suspicious of Haman. Therefore when the king was thoroughly intoxicated and seemingly optimally indulged to do anything she might ask, even grant her up to half the empire (5:6), Esther realized that her likelihood of success was too low without the king’s suspicion. She had only one chance; she would have to postpone. She had hoped for the party to be enough to subtly conjure his insecurity, but she overestimated his paranoia. She would have to wait, seeking some other means of distancing the king and Haman. Esther had no reason to think that the next day’s party would be more successful but she was running out of time.

Esther likely went back to her chambers petrified. What if nothing changes overnight? Would she be forced to make her request tomorrow or could she possibly postpone again? Unbeknownst to Esther the seeds of her ploy germinated later that night as the king sobered. Something was keeping the king up, possibly a creeping sense of perfidiousness in his ranks. He was distressed enough to be compelled to remember who his true friend’s and/or enemies were. From his book of memories he recalled how Mordechai had protected him from his guards who sought to kill him. In the midst of this query, dredging up unsettling memories of those closest to him, lo and behold who happens to be outside, Haman. While normally Haman was a common sight in the palace, his presence in the middle of night was aberrant. The king called upon Haman to provide counsel for how to reward excellent civil service. The text reveals to us what was likely blatantly obvious. Haman was certain the king was referring to him. Haman’s advice was to place the crown on that person’s head, dress him in the king’s clothes, on the king’s horse and declare his honor while escorting him in the streets (6:8-9). Yet the king did not completely take his advice; rather, the king said to fulfill all the above with the exception of the crown (6:10). The conspicuous absence of the crown demonstrates that Haman had reached too far. It is not clear from the text but at this moment we see for the first time that the king does not do exactly as Haman had advised. Previously the king would have given Haman his signet ring to do as he pleased, yet tonight, something made the king reluctant. In a subtle reference to the attempted coup of Bigtan and Teresh, Achashverosh reversed Haman’s self-aggrandizement, forcing him to bestow his aspiration upon his worst enemy. The king’s suspicions were aroused.

The following day, after Haman is defamed by escorting Mordechai, the text provides the personal dialogue of Zeresh and Haman’s advisors’ foreboding premonition of Haman’s impending downfall (6:13). This posuk is critically informing us what we could not conclude before. There was now a very public demonstration of a change in the king’s relationship with Haman. This change may have been minute; after all, the king must have still thought highly enough of Haman to have him escort Mordechai in the streets, qualifying Haman as ‘a notable dignitary of the king’ (6:9). Nevertheless this was the change Esther needed to see to encourage a slight improved probability that the king would respond positively to her request.

Haman is immediately escorted from his home to the queen’s party. Esther seizes the serendipitous change in the king’s favor and reveals her identity, emphatically condemning Haman. To Esther’s chagrin, the king is enraged at the revelation but not convinced. We see at this point just how close Esther’s plan was to fail, and how it almost certainly would have failed had she asked the day before. The king storms out to the garden to compose himself and think, while inside Esther is left alone with Haman who begins pleading for his life. Upon the king’s return he sees Haman on the couch with the queen. The various seeds of suspicion finally take root. The king declares, “also to conquer my queen in my home!” (7:8) This statement implies two separate motivations for the king’s anger; two distinct suspicions. First he is explicitly angered by Haman’s proximity to his queen and suspects his intentions with her, confirming Esther’s subtle efforts the prior day to have succeeded. Secondly it reveals the king’s suspicion that Haman ‘also’ wanted something else beside the queen; the crown he sought the night before.

The lesson of the megilla derives from careful dissection of the machinations of Esther. The Jewish people have lost their sovereignty, existing in a world devoid of God’s conspicuous providence in a foreign land. This new reality of hester panim, divine hiddenness, would be the new reality for the Jewish people as they dispersed in exile. The hero of the Purim story is Esther, not Mordechai. Mordechai’s blatant disregard for the new reality of the Jewish people in exile manifests in his defiance in the public forum. An act of religious piety respected in older times in the homeland, but now conspicuously disturbing. Nearly resulting in the destruction of the susceptible nation. It was Esther’s delicate and deliberate maneuverings that provided Israel’s redemption. Megillat Esther manifests the reality of the Jew in the diaspora. A post prophetic reality in which survival depends on the proficiency of our intellect and planning to provide the circumstances so that should we be worthy, success will have fertile soil to flourish. Possessing the wisdom to know that in a world in which one is weak and vulnerable, one cannot act because they are right, but because it is the right time to act.