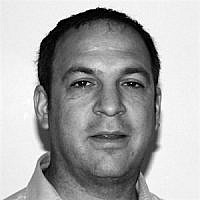 The Blogs
Daniel Schwab
Apply for a Blog
Advertisement
Please note that the posts on The Blogs are contributed by third parties. The opinions, facts and any media content in them are presented solely by the authors, and neither The Times of Israel nor its partners assume any responsibility for them. Please contact us in case of abuse. In case of abuse,
Report this post.

Imagine finding a treasure trove of documents that reveal the forgotten history of your family going back many decades. Well, that’s what happened to me when, in 2009, I discovered my grandfather’s collection of thousands of letters written, mainly in German, between himself, friends and family members, between the 1930s and 1969. The next several articles focus on how my family story tells a larger story of thousands who sought justice but found precious little of it.
Originally from Hanau, Germany, twelve members of the Schwab family were murdered, as part of Hitler’s Final Solution for the Jews, while my grandfather Rudolph (Ralph) fled to Belgium, Holland, the UK and eventually arrived in South Africa in 1936, leaving his parents and brother behind.

Freedom is not a gift from Heaven. You must fight for it every day” “I am someone who seeks justice not revenge” Simon Wiesenthal

Before 1933 my great-grandfather, Max Schwab, was a well-known and valued citizen of Hanau. A member of the boards and president of various clubs and societies, his ancestors had been living in Hanau for over 300 years.

After the war, Ralph was clearly tormented by the tragedy, spending many thousands of hours trying to find out the truth of what happened to his parents and brother, and then making legal claims against the German government.

Ralph spent 23 years writing thousands of letters to attain justice for his family. Despite tremendous efforts, his restitution claims were not finalized during his lifetime, since he was killed in a hit-and-run car accident, while some of the cases were still in process.

Over the years my family and I focused on building families and educating ourselves about our Jewish family history and traditions instead of thinking about revenge or compensation, however after realizing the extent of the injustice caused to my family and my grandfather’s wishes for justice articulated in the letters, I decided to investigate the cases further.

What the Nazis stole

The Schwab family story is just one example of many thousands. It is estimated that the total value of the Nazi debt to the Jewish People is approximately $350bn in 2007 dollar terms.  Most of this includes amounts that are often overlooked when talking about the Holocaust in financial terms, such as loss of income, unpaid wages for services provided during slave labour camps, loss of immovable property, confiscated bank accounts, insurance policies that were never paid out, art works, coin collections, Judaica and other valuables that were either stolen, forcibly sold or destroyed by Nazis.

Holocaust victims paid once for being Jewish, now they should not be told that it is unseemly for them to press their claims, but not wrong for banks to hold on to victims’ assets”. Richard Cohen. “The money matters”. Washington Post (December 8, 1998)

Nazi Germany relentlessly expropriated the assets of German Jews through numerous measures after the enactment of the 1935 Nuremberg Laws, which included special discriminatory taxes, blocked accounts, the “Aryanization” of property, and outright confiscation. In addition, Nazi restrictions, boycotts of Jewish businesses and the ejection of Jews from professions forced Jews to liquidate their possessions under duress, only a fraction of their value. Jews who fled Germany before deportations in 1941 were forced to pay a heavy “emigration” tax (Reichsfluchtsteuer) and the (Judenvermogensabgabe), a property tax the Germans initiated after Kristallnacht in 1938, contending that, having “provoked” the outrage of the German people, the Jews had to pay for the damages.

By the end of the war, those not murdered had to pick up the pieces of their lives and begin rebuilding, while believing in the future. Restitution or compensation was something that many people dreamed of, but were not sure how so many crimes could be restituted. Fortunately there were forces, both among the Jewish peoples’ leadership and the American government, who believed in, and were able to establish, a meaningful restitution program.

The next articles will describe what the  restitution and compensation programs where, what exactly was recovered, the comparison between the German and French restitution and compensation programs, why this topic is still relevant today, where things went wrong, what we could have done better, recommendations and conclusions. The last article will include end notes with source material for those who wish to conduct further research.

About the Author
Daniel Schwab is an international business development executive with twenty years experience, developing renewable energy projects around the world. He is the founder of the Holocaust Social Media Project and a researcher for the book From Things Lost: Forgotten Letters and the Legacy of the Holocaust, Wayne State University Press
Comments