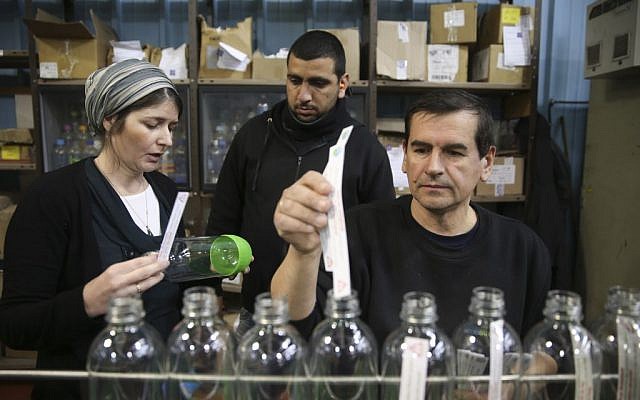 A Palestinian worker speaks with his Jewish employee at the SodaStream factory in the Mishor Adumim industrial park, February 2, 2014. (photo credit: Nati Shohat/Flash90)

Parshat Korach begins with the words “Vayikach Korach”, “Korach took” yet the text never tells us what he took.

Rashi explains that Korach won over the heads of the Sanhedrin with flattering words.

Gur Aryeh, a commentary on Rashi says that the essence of the person is the mind which can’t be taken physically but may be taken figuratively when submitting to another persuasion.

Korach tried convincing the important people that Moshe and Aharon were not good leaders and that they take advantage of the Jewish people.

Korach was trying to make it look like Moshe and Aharon were taking advantage of the widow and making up rules to drive her crazy when in fact those are Gods rules from the Torah.

Although she had to give up parts of her possessions to the Kohanim, Leviim and those less fortunate, there would have still been plenty left for her and her family.

Korach doesn’t bring up the fact that the Torah protects those who may have less such as the stranger, the widow and the orphan.

This reminds me of the BDS (boycott, divest, sanction) smear campaign against Israel, working to convince people from around the world to stop buying Israeli products. BDS is also pushing for products from the “settlements” to be labeled as such so that people can especially boycott products from over the “green line.”

What is the problem with BDS beyond trying to hurt Israel’s economy?

If Israel ends up closing factories, especially over the “green line” it will be a bigger problem for the Arabs as it is mostly Arabs who work in those factories. Most of the Arabs that work in those factories just want to earn an honest living and bring home a paycheck at the end of the month. If they are no longer working for Israelis, they will not be paid nearly as well (if they are able to get jobs at all). Those in charge of the BDS campaign are actually hurting the people who they think that they are helping.

In Jerusalem, where Israeli-Arabs are free to shop wherever they like, I don’t see Arabs boycotting Israeli stores or products. The malls and supermarkets are full of Israeli-Arabs who are looking for a good deal just like the rest of us!

Korach started a rebellion against Moshe and Aharon and in the end Korach and his followers were swallowed up by the earth to show that Korach would never be a leader and his spreading of lies and stretching the truth would never work.

Those who are running the BDS campaign will not win either. Many quality products come out of Israel and those looking for quality will not compromise. Those who choose to go along with it will be taken down the wrong path like Korach’s followers.

Wherever you are in the world, help support Israel by buying Israeli products and show the world that you are on Moshe’s side, not Korachs!