January 27th marked the International Holocaust Remembrance Day. Notably, this day carries little significance in Israel. There are no national ceremonies or moments of silence to commemorate the 6 million Jews who perished in the Holocaust. Israel has a dual relationship with the Holocaust. On the one hand, the Holocaust is commonsensical to Israelis.

For 2,000 years Jews were ostracized, marginalized and attacked by the nations of the world. At times, these took the form of a local pogrom. A random and violent assault on Jews in a small Ukrainian village brought about by the consumption of too much alcohol or the celebration of a Christian holiday. Other times such attacks were orchestrated by the state, as was the case in Russia under Czar Nicholas the 2nd. The Nazis did not invent the pogrom. True to the modern world, they merely industrialized it. Rather than focusing on a village or a territory, they focused on a continent. In this sense, the Holocaust was the final, inevitable and most horrid stage in the pogrom’s long evolution.

On the other hand, the Holocaust remains unfathomable. Israelis cannot fully comprehend how the will to live could carry an individual from his/her home to the Ghetto and, ultimately, to the death camps. Even more beguiling is the fact that Holocaust survivors resumed the labor of living. They rejoined the world rather than retreat from it. Survivors formed new families, engaged in new carriers and discovered new wonders all the while carrying within them the last traces of a glorious Jewish civilization that was sacked by the Nazis.

Some survivors, such as my grandmother, habitually reverted to their Holocaust mentality. A supporter of the two-state solution since the late ’80s, my grandmother always had a knee jerk reaction to terrorist attacks. ‘What the Nazis started, the Arabs will finish’ she would comment before transitioning back to her leftist, Israeli mindset. Most troubling for Israelis is the question: why did the Jews not flee when they had the chance? How could they miss the writing in Mein Kampf? And though many Israeli youngsters visit Auschwitz, they can never fully comprehend what life looked like within it. It was, according to Primo Levi, a parallel universe with its own laws of physics and nature. Thus, like the speed of light, Israelis can only approximate the Holocaust but never reach it.

Israel’s official Holocaust commemoration day falls between the Passover holiday and Israel’s memorial day for fallen soldiers. This date is no coincidence. As scholars have noted, what society wishes to remember or to forget is the result of choice, not chance. The date of Israel’s Holocaust memorial day reflects two important facets of Israel’s national narrative. First, that the state of Israel was in no way a by-product of the Holocaust. Already in the late 1930s, Jewish and Zionist organizations had established the institutions necessary for statehood: healthcare facilities, a banking system, workers’ unions and political parties. Israel was a ‘state in the making’ long before the deportations to Auschwitz began.

Second, the lesson of the Holocaust is that Jews can only enjoy safety when armed- for no nation in the world stood up for the Jews, or bombed the railways to Nazi death camps. Passover marks the Jews’ liberation from slavery, the Holocaust memorial day signifies that Israeli liberty rests on armed self-defense while the memorial day for fallen soldiers represents the heavy price of self-defense. Underlining this succession of events and holidays is the argument that Jew’s right to the land of Israel also does not stem from the Holocaust but from an ancient connection to the land, one that dates back to biblical time.

The deed to the land of Israel was signed by God, not Adolf Hitler.

On the global arena, however, International Holocaust Remembrance Day is observed by many states and diplomatic institutions. The date of January 27th was chosen as it saw the liberation for Auschwitz. Internationally, Auschwitz is an icon that immediately summons the horrifying images of starving Jews and piles of carcasses. Auschwitz is the ultimate symbol of the depth of man’s depravity not because it was the largest or cruelest death camp. But because cultural products have made Auschwitz synonymous with the Holocaust in its entirety. Television shows such as ‘Holocaust’ and ‘War and Remembrance’, as well as movies such as ‘Schindler’s List’, always end at the infamous Auschwitz chimney.

As nations commemorated International Holocaust Remembrance Day, their diplomats went online to note the importance of the day and explain why the Holocaust is deserving of its own, global remembrance day. The digital activities of three nations demonstrate how national memories impact online, diplomatic communications. The first is Germany. The tweet below, published by the German Mission to NATO, quoted Chancellor Merkel as feeling ‘ashamed’ that the Holocaust was perpetrated by Germans. The term ‘shame’ is regularly employed by German officials and diplomats when referencing the Holocaust. In diplomacy terms matter and it is, perhaps, for this reason, that German officials never employ the term ‘guilt’, as guilt implies complicity. The German memory, again a matter of choice, states that modern Germany cannot be judged for the sins of its fathers. As such, the Holocaust should play no role in Germany’s global image or standing in the world. Yet it is ‘shame’ that compels Germany to combat anti-Semitism wherever, and whenever it rears its ugly face.

I am deeply ashamed of the Shoah, of that betrayal of all civilised values, perpetrated under the National Socialist regime. It is & remains Germany's everlasting responsibility to remember these events & to commemorate the victims – Chancellor Merkel on #HolocaustRemembranceDay pic.twitter.com/NJt4egsdE1

In recent years, Japan has also taken to Twitter on January 27th. More than once, Japanese Embassies have tweeted the image of Chiune Sigihara, a Japanese diplomat who risked his life by issuing transit visas to Jewish families fleeing the Nazis. Japan never mentions the role it played in WW2 online, nor does it reflect on how its actions influenced the progression of the Holocaust. Engaged in a war in the Pacific, America and the Allies ultimately invaded Europe in mid-1944, reaching the camps in early 1945. It is hard to calculate how many lives would have been saved had the Battle of Midway never been fought. And so, Japan chooses to remember, and remind us, of those few instances in which it saved Jewish lives.

Like Germany, Japan too contends that WW2 was a shameful era, but one that does not reflect contemporary Japan which is nowadays associated with Sony Playstations rather than Kamikaze pilots.

"He knew they were human beings who had to be rescued and whose lives were at stake.” Japanese diplomat Chiune Sugihara saved thousands of Jewish lives from the Holocaust by providing transit visas to fleeing families. #HolocaustRemembranceDay https://t.co/lMpmn27V4T

Another nation struggling with its memory of WW2 is Poland. In recent years, the Polish government has invested heavy resources in offline and online communications campaigns meant to distance Poland from the atrocities of WW2. According to these campaigns, and the new national memory being molded by the current government, Poland was the first victim of Nazi Germany. Moreover, of the 6 million Jews who perished, 3 million were Polish citizens. Lastly, Poles were never Hitler’s willing executioners. In some ways, this campaign has backfired. The more Poland argues it had no role in the Holocaust, the more it is associated with the Holocaust. This could explain why the new Polish memory of WW2 was absent from all diplomatic tweets published on January 27th. Instead of discussing the occupation of Poland and its suffering under the Nazis, Polish Embassies settled for honoring the memory of the dead and locating a Polish diplomat who also saved lives by issuing transit visas.

A new @yadvashem study claims Consul Konstanty Rokicki was NOT the only ???????? diplomat of @PLinSwitzerland to forge Paraguayan passports for Jews, the other 'forger' being Ambassador Ładoś' deputy Stefan Ryniewicz.

Online commemoration of #HolocaustRemembranceDay at #UN ????????.
We honour the Victims of the Holocaust and remember the Survivors. It is our joint responsibility towards ourselves and future generations to preserve the memory of the Holocaust and never let it fade. #WeRemember pic.twitter.com/OekJCrnHJa 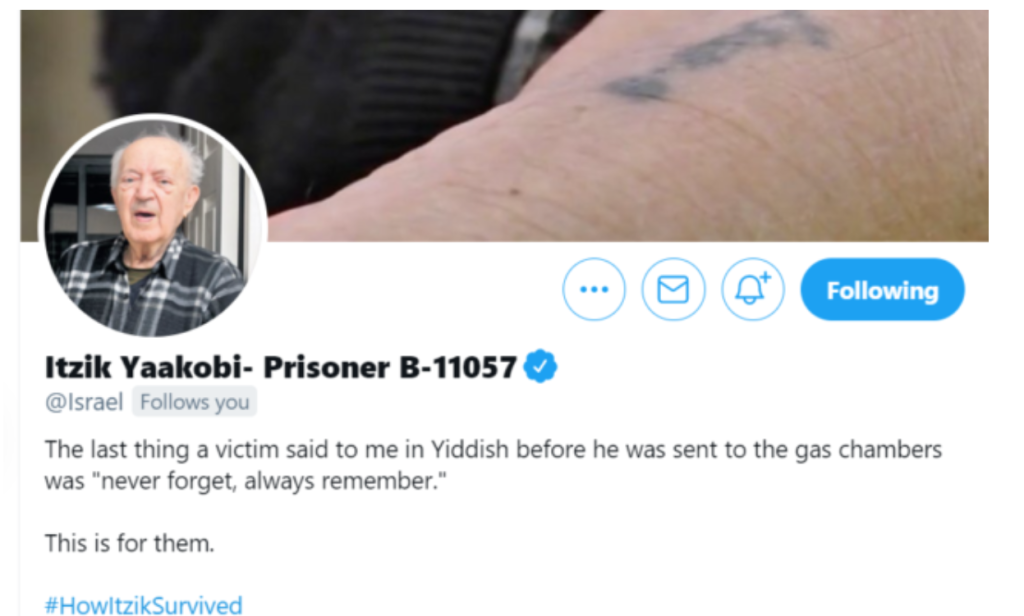 Israel on its part handed over control of the official @Israel Twitter account to a 92-year-old Holocaust survivor. Throughout the day he recounted his memories of being forced to eat pork, surviving the ‘selection’ at the entry to Auschwitz and ending up in the Kinder Larger with Eli Wiesel. There was something fitting in this gesture. The last of the survivors are dying and with them so does all first-witness account of the Holocaust. Through its digital activities, the Israeli MFA ensured that the proof of Auschwitz would be heard, possibly for the last time.

As a boy, I remember visiting the beaches of Tel Aviv. Everywhere you looked you encountered men and women with tattoos on their arms. They were part of everyday life, of the Israeli landscape. Tattoos would be visible in ice-cream parlors and café’s where men wore short-sleeved shirts. One rarely encounters survivors anymore. The sight of an Auschwitz tattoo is an oddity. A new generation of Israelis is growing up with no tangible link to the Holocaust as their grandparents were mostly born in post-1948 Israel. As the survivors die, Israel’s memory of the Holocaust will alter as well and January 27th may become an important date in Israel, one in which all nations try to approximate the Holocaust without being able to do so.