The digitalization of diplomacy has often been greeted by skepticism from diplomats, journalists and the general public. What is so important about a few diplomatic tweets, or images of world leaders? This post uses an American and Israeli case study to demonstrate just how much diplomacy has altered in the digital age and why diplomats, journalists and even citizens must strive to understand it. The case study consists of the image shown below shared by the US White House online. The image itself is indicative of diplomacy’s transformation.

This image is representative of a shift towards more transparent diplomacy. In the past, diplomats would hold well-orchestrated press briefings before entering negotiation rooms which were kept far from the public the eye. Digitalization has changed as the veil of diplomacy has been lifted. Ambassadors tweet from the UN Security Council Chamber; world leaders take Selfies with their peers while NATO ministerial meetings are live-streamed. At times, these are mere photo opportunities. Other times, digital publics can join ministerial meetings in which sensitive issues are debated, ranging from security threats to digital disinformation. The general public now has greater access to diplomatic accords as well. The Iran Nuclear Deal was published in full by the White House on its website. The same is true of Trump’s image in which diplomatic negotiations of the highest order, a phone call between the leaders of Israel and Sudan, are done in public and for public consumption. And yet, diplomats have mastered the art of partial transparency. Secret negotiations remain discrete while the breakthrough are Facebooked in real-time.

The question that follows is what does this teach us about international relations. First, that diplomacy is a social institution whose practices are shaped, among other, by societal process. The digital society is one that practices constant self-transparency. Parents Instagram their kids first steps; couples tweet their engagements; friends YouTube vacations; professors tweet their publications while youngsters even Selfie visits to Holocaust memorial sites. This normative demand to lead a transparent life is tied directly to social media as users seek to summon the gaze of the once feared, and now loved, Big Brother. Yet in return, they expect greater transparency from their leaders, parties and governments. Individuals who fail to share their life online are branded as having something to hide. The same is true of government and diplomats, traditionally laboring out of sight. Credibility therefore rest now also rests on some of form of transparency with credibility being the key to a diplomat’s potential influence over others. Credibility is also crucial in international relations for countries who lack credibility lack allies and influence in the world fora. Thus, diplomats and MFAs who refuse to share information online may soon become suspect and alone, adrift at sea.

The Global is the Local

The picture depicted in this post deals with an international issue- the establishment of ties between two enemy states (or at least antagonistic states). Yet the picture was published for domestic purposes. Published just days ahead of the 2020 elections it depicted Trump, and his administrations, as peacemakers rather than war mongers. This call followed the historic Abraham accords where US mediation led to the normalization of ties between Israel and the United Arab Emirates. In both cases, Trump claimed to have achieved more than all his predecessor, renewing the peace process and further contributing to Israel’s safety.

International relations scholarship has long since identified links between the national and international. Disputes at the national level can block agreement at the international levels. Indeed, the ratification of the Oslo accord hinged on one vote. Similarly, harsh tactics at the international level can carry favor with national voters. For instance, many have argued that Prime Minister Netanyahu’s tough stance opposite President Obama prevented Israeli withdrawals from the West Bank. This is especially true of American politics where Presidents are judged on their foreign policies as the US has a truly global policy. Reaching foreign policy achievements ahead of elections is an effective way of swaying voters. What digitalization offers is the ability to better capture the dynamic between the national and the international given that digital diplomacy rests on images. A tweet or post lacking an image are likely to fall on deaf ears. In the Trump image, a President surrounded by US flags and pins of US flags is reaching out to the world (via a phone), promoting peace, ensuring American interests abroad and bolstering US allies such as Israel.

The relationship between the national and international has also been explored in other studies dealing with domestic digital diplomacy. Here, international achievements or accords are branded online like cans of Coca Cola. The purpose of such campaigns is to rally national support for contentious international achievements such as the Iran Nuclear Deal or climate accords. Social media offers diplomats the ability to tailor campaigns to specific publics thus promoting congressional or parliamentary ratification. Social media campaigns are also used to sell foreign policy triumphs. According to the Israeli MFA’s Twitter page, for instance, the normalization of ties with the UAE is the greatest diplomatic achievement in Israel’s history. Notably, different MFAs sell diplomatic achievements differently- some by appealing to emotion, others by appealing to reason and others by humor.

Nations have traditionally signaled their intentions to one another. The mass mobilization of Austrian troops signaled its intention to wage war on Serbia. When the French were displeased with King Henry VIII, they assassinated his uncle in Italy. Nations can also signal a willingness to de-escalate tensions. Such was the case when President Kennedy and Nikita Khrushchev exchanged letters at the height of the Cuban Missile Crisis. Israel has often taken to signaling its neighbors. In the press, Prime Minister Benjamin Netanyahu often praises Saudi leadership while just last week a historic summit did, and did not, take place between Netanyahu and the Saudi Crown Prince. Digitalization offers new approaches to signaling as MFAs knowingly follow one another online. Consider the tweet below published during the 2014 Crimea Crisis. 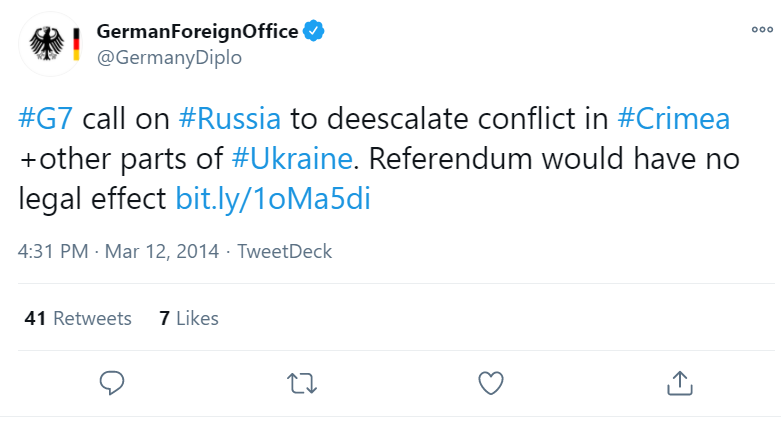 The tweet clearly calls on Russia to de-escalate tensions in Crimea. But what is unique about the tweet is the reference to ‘other parts of Ukraine’. Until this tweet, such Russian activities were undisclosed.  The tweet also states that a referendum would hold no legal bearing. Yet the subtle signal in this tweet is the #G7 which officially announced that Russia had been expelled from the G8 and that the remaining G7 would not sit idly by and watch it consume Crimea. Which they did. Importantly, only journalists and diplomats who had learned the language of digital diplomacy understood the meaning of the #G7 hashtag and the fact that European and American allies had decided to escalate their response to Russia’s actions. Citizens looking to better understand the world, will also need to learn the language of digital diplomacy.

Trump’s image also sends a powerful signal. The world is run from Washington, not Beijing. It is in the Oval Office that peace is brokered and power is exercised halfway around the world. And it is through the Oval Office that one of the world’s most difficult conflicts, the one between Israel and some of its neighbors, will be resolved. Moreover, Trump’s image in the oval office is an iconic one. An image depicted in newspapers throughout the 20th century as well as films and television shows. It thus signals that the 21st century will continue to be dominated by America. In other words, the news of America’s demise has been overly exaggerated.

About the Author
Ilan Manor (PhD) is a diplomacy scholar at the University of Oxford. Manor's recent book, The Digitalization of Diplomacy, explores how digital technologies have reshaped diplomatic practices. Manor has contributed to several publications including The Times of Israel, The Jerusalem Post, Haaretz and the Jewish Daily Forward. According to his Twitter bio, Manor is the inventor of the ashtray. He blogs at www.digdipblog.com
Comments