Disengagement was a mistake. Just as its critics claimed, it brought not peace but rockets. Rather than bolstering coexistence, it emboldened our enemies to attack us. Designed to bring us greater acceptance diplomatically, it has left us ever more isolated. It was a mistake then and it would be a mistake in the future to withdraw unilaterally from territory in our control. But on the tenth anniversary of the Gaza withdrawal, we all too easily overlook the assets that Disengagement has given us: a West Bank that is safer and more firmly in Israel’s control.

The graph below offers the latest statistics available from the Israel Security Agency (Shin-Bet) on fatalities due to Palestinian terror since the outbreak of the second Intifada. It does not include 2014, a year when 70 Israelis were killed due to terror — from Gaza. Fatalities last year emanating from West Bank terror remained low.

What has kept the number of fatalities from the West Bank relatively low over this past decade? Operation Defensive Shield in 2002 knocked out terror infrastructure in the West Bank. The security barrier, constructed in 2004 has also played a big part. But what has kept that terror infrastructure from re-establishing itself in the West Bank has been the ongoing security cooperation between Israel and the Palestinian Authority. What has happened here is that unwittingly, Israel has backed itself into a deft and effective game of divide and conquer. 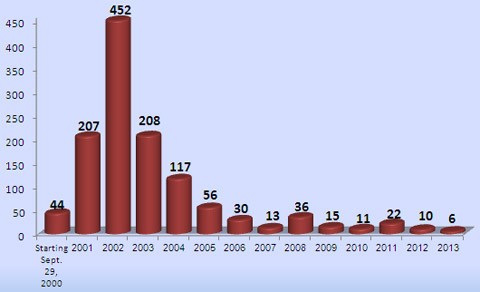 As its critics claimed it would, Disengagement brought Hamas to power. But that set off a struggle between the power brokers in Gaza — Hamas — and the power brokers in Ramallah — the PA — that continues to seethe to this day. As a result, we are the beneficiaries of that old Arab adage, “My enemy’s enemy is my friend.” The PA offers us security cooperation not out of a love of Zion, and not because a worthless peace agreement tells them to, but because it is in their interest to do so, to defeat Hamas. We were foolish to empower Hamas. But in a way neither intended nor foreseen by either left or right, doing so has given us our security forces intelligence and freedom of movement to keep the terror threat in the West Bank at near historic lows.

But this unintended ploy of divide and conquer has paid off even more handsomely in the diplomatic arena. Disengagement has achieved one of its stated goals with greater success than its architects could have imagined: forestalling the so-called two-state solution.

Dov Weisglass, Prime Minister Ariel Sharon’s closest advisor, laid out the logic of disengagement in an interview with Ari Shavit of Haaretz in October of 2004, ten months before its implementation. “The Disengagement,” Weisglass said, “is actually formaldehyde. It supplies the amount of formaldehyde that’s necessary so that there will not be a political process with the Palestinians.” Weisglass outlined his fears: “The political process is the establishment of a Palestinian state with all the security risks that entails. The political process is the evacuation of settlements, it’s the return of refugees, it’s the partition of Jerusalem. And all that,” Weisglass concluded, “[will now be] frozen.”

Weisglass explained further: “[Disengagement] thrusts [the Palestinians] into a situation in which they have to prove their seriousness.…There are no more Israeli soldiers spoiling their day. And for the first time they have a slice of land with total continuity on which they can race from one end to the other in their Ferrari. And the whole world is watching them… asking what they intend to do with this slice of land.”

U.S. president Barack Obama has pursued peace talks more aggressively than any of his predecessors. But to no avail: all of the President’s horses and all the President’s men can’t put the Palestinians together again. The Palestinian civil war — brought about by the Disengagement — has left our enemies divided, unable to negotiate with one voice, incapable of compromise on any issue.  Even Obama recognizes this and has given up on his delusion that a workable compromise can be achieved.

Seen in this light, Prime Minister Binyamin Netanyahu was absolutely correct a year ago to refrain from toppling the Hamas regime in Gaza at the conclusion of Operation Protective Edge. Recapturing Gaza would have taken an enormous toll in Jewish blood and treasure.  But it also would have denied Israel one of its greatest strategic assets: The unending power struggle between the PA and Hamas.

Last week the Jewish world lost actor Theodore Bikel, the ultimate Tevye of Fiddler on the Roof. Tevye’s most famous line comes when he offers a sardonic blessing to the oppressive Russian leader, “May the Lord bless and keep the czar… far away from us!” Having foolishly empowered Hamas through Disengagement, we now reap the unintended collateral benefits of that unfortunate move. Moving forward we should seek to sustain both Hamas and the PA as viable entities, and say along with Tevye, “May the Lord bless and keep them far, far apart.”