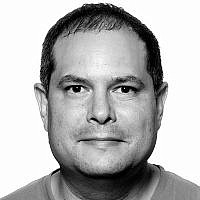 The Blogs
Ze'ev Portner
Apply for a Blog
Advertisement
Please note that the posts on The Blogs are contributed by third parties. The opinions, facts and any media content in them are presented solely by the authors, and neither The Times of Israel nor its partners assume any responsibility for them. Please contact us in case of abuse. In case of abuse,
Report this post.

Benjamin Disraeli was one of the most extraordinary and indeed one of the most unlikely individuals to have ever become leader of the Conservative Party and British Prime Minister. Disraeli was a school dropout, a  bankrupt, manic depressant in his early twenties, regarded as a cad, and throughout his life his Jewish antecedence was assailed by anti-Semites in Victorian society where bigotry against Jews was seen as fair game. So how did he do it? Put simply, it was Disraeli’s sheer charisma, wit, big personality, and  ability to deliver great speeches which made Parliament popular. Perhaps above all it was, the courage of an outsider who believed himself to be deserving of a remarkable political career that propelled him to the top of the ‘greasy pole.’

Former British Foreign Secretary, Douglas Hurd, and British Prime Minister David Cameron’s former speech writer Edward Young vividly bring to life Disraeli’s persona in their book Disraeli or Two Lives. One of the most interesting chapters in the book deals with Disraeli’s relationship with the faith he was born into, namely Judaism. Disraeli’s father Isaac had him baptized at the age of 12 due to a falling out he had with the elders of the Bevis Marks synagogue in London.

Nevertheless, Disraeli’s Jewish origins were for him a matter of great personal pride throughout his career. They even became an aggressive defense mechanism against the ant-Semitism he endured. In a debate on Jewish emancipation in the House of Commons, Disraeli exclaimed: “Where is your Christianity if you do not believe in their Judaism.”

Hurd and Young point out that Disraeli supported Jewish emancipation in opposition to many in his own Party and it was Lord Derby’s minority Conservative Government with Disraeli at its heart as Chancellor of the Exchequer that passed the Jews Relief Act in 1858 which ended the exclusion of Jews becoming Members of Parliament, allowing Lionel De Rothschild to take up his seat in the House of Commons at his 11th attempt in 1858. And, as is so befitting of an individual with the name Disraeli, he was a Zionist even before the term was coined. In his diaries Edward Stanley,15th Earl of Derby recorded a detailed discussion he had in 1851 with Disraeli in which Disraeli expounded on the advantages of creating a Jewish homeland in Palestine by buying up  land from Turkey.  Money would be forthcoming from the Rothschild family and other leading Hebrew capitalists. According to Stanley, Disraeli concluded that a “man who could carry this out would truly be hailed as the next Messiah,” but contrary, to the accusations made by his arch rival Gladstone. Disraeli was no ‘crypto Jew’ and took Anglican Communion regularly throughout his life.

Disraeli, as leader of the Conservative Party, was just slightly more successful electorally than Shimon Peres; winning only one out of three elections he contested as leader.   Nevertheless, as  Chancellor of the Exchequer  he was a  prime mover of the Reform Act of 1867 which saw the British electorate doubled from 1.3 million to 2.5 million. Furthermore, the government he led from 1874 to 1880 introduced such important legislation as giving powers to local authorities to replace slums with adequate housing and to maintain sewers and ensure a fresh supply of water. Street lighting and rubbish collections were also introduced, an Education Act and two Factory Acts which began to improve working conditions and which according to Lord Blake makes the measures passed by the Disraeli government as constituting the biggest installment of social reform passed by any government in the 19th century. Disraeli was able to exclaim that the legislation “will retain for the Conservatives the lasting affection of the working classes.”

The book has wonderful anecdotes especially to do with Disraeli’s colourful private life. At the age of 36 he owed in today’s terms 2 million pounds and he had to become an MP, as this would give him immunity from arrest. Disraeli also courted older women and indeed married Mary Ann Lewis,  the widow of a Tory MP, who was, 12 years his senior. He married her for money to help him pay off his debts.  “I may commit many follies in life, but I never intend to marry for love which I am sure is a guarantee of infidelity.” He later recanted and admitted that he had fallen in love with Mary Ann and had he married her again it would have been for love. There is also the story of Mrs. Williams a widower who left Disraeli a fortune on her death provided she be allowed to be buried next to him. Indeed, she can be found buried next to Disraeli in the churchyard on his country estate, Hughenden Manor.

Disraeli’s lasting legacy is the power of his word that even 133  years after his  death British politicians like to quote him or misquote him. As one contemporary observed: “I never listened to a speech of yours without thinking, this word, this sentence will be remembered a hundred years hence.” He made politics interesting, colourful and engaging and that is why Disraeli is one of those few British  politicians whose life story has been chronicled by Hollywood.

About the Author
Ze'ev Portner from London is a former political adviser to British Labour Member of Parliament, Louise Ellman. He has written briefings for both Tony Blair and Jack Straw when they were prime minister and foreign secretary of the United Kingdom. In 2012, Portner qualified as an Israeli attorney, undertaking his legal training in the law offices of Gilead Sher and Co. He is currently working as a copyright law specialist at the National library of Israel. He also guest lectures at Greenwich, Liverpool (UK) and Tel Aviv Universities.
Comments