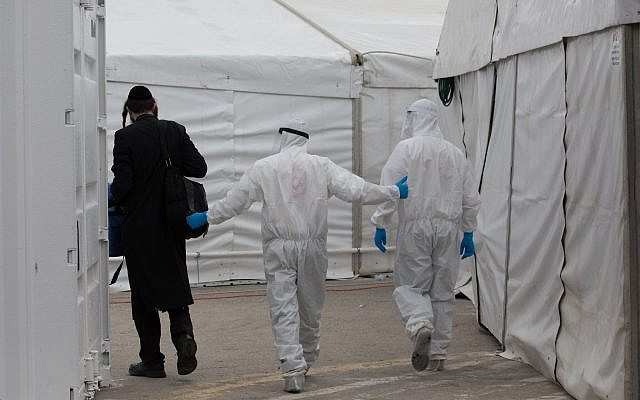 The global village, which promised unimagined freedoms, is now enslaving all of humanity in a common and shared destiny. But while the infection is blind to race, religion, nationality, and gender, the cure is not. Whether you live or die is principally a regional matter.

Where you live, the policies of your political leadership, the culture of your nation, and the sense of collective responsibility of your fellow citizens will determine your future. The pandemic is global, the pursuit after the vaccine spans the world, but the immediate cure is local.

As we have seen over the last two months, who will live and who will die is not principally a question of who will be infected, but of how we respond once the infection has spread. We are dependent on our country’s ability to acquire the equipment we need and to distribute it equitably to those in need. We are at the mercy of our policymakers’ ability and desire to plan ahead and, most significantly, our neighbors to practice responsible social distancing and self-quarantine

One of the great myths of citizens in prosperous Western societies is that principles and values, more than scarcity, influence our distributive decisions. But in fact, the scarcity principle is always at play. In regular times it is more subtle and less obvious. So, for example, when a country or a health insurance company determines the “basket” of drugs, which it covers, it is making a life-and-death choice based on scarcity. The individual, however, may have access to supplementary insurance, choose a different provider, or have access to other sources of funds. Some do, however, some do not.

What defines the current crisis is that it is clearly and all about scarcity and limited resources. It comes down to quantifiable numbers. Numbers of medical personnel, hospital beds, protective equipment, and the most critical and scarce of all – respirators and ventilators. It is precisely at this moment that the character of a society is tested and measured.

What do we do, what do we think, how are we to feel, when one segment of our society, one neighborhood or city, has acted irresponsibly and is now infected way out of proportion? What are my moral responsibilities to a community, who I believe has ignored public health guidelines and government instructions, and who, while constituting only 10 percent of society, are now consuming over 50 percent of its limited ventilators? Can I choose between blood and blood? Can I choose mine over theirs?

There is no doubt that there are many factors, which have influenced the rate of infection within the Haredi community — population density, poverty, lack of media access, superstition, and poor and misguided leadership. While many, and possibly even most, are victims, there is no doubt that some of the degree of infection is a result of conscious decisions on parts of the Haredi community and its leadership to ignore the instructions and separate themselves from the health norms that most of Israeli society had adopted. They may deserve my care, and even my compassion, but do they deserve the ventilator that I, and others who fate determined their illness, need?

In the times of the Talmud [BT Gittin 46b–47a], the Rabbis determined that the essence of a Jewish society is its bond of loyalty and care. Consequently, anyone who is taken captive has a right to demand that our society spend its resources to redeem them. If, however, the individual sold him or herself, their irresponsible actions release society from its responsibility. Societal loyalty and responsibility have limitations. Citizens and individuals have to act responsibly if they are to demand that others be responsible for them. Loyalty can be demanded, but only when it is reciprocal. Applying this teaching to our contemporary reality gives legitimacy and urgency to the question of whether the Haredi community has acted responsibly.

The Rabbis of the Talmud, however, instituted a qualification on their ruling: If the life of the individual in question is in danger, they are to be redeemed regardless of whether they were taken captive or chose to sell themselves into captivity. Individual responsibility and loyalty are relevant factors, but not in moments of life and death. There is a time for judgement and moralizing. When life is on the line, it is not that time. When life is in the balance, we do not distinguish between the good and the bad, the responsible and the irresponsible. We do not distinguish between blood and blood.

A time will come, and I hope very shortly, when Israeli society in general and the Haredi community in particular, will have to engage in a serious cheshbon nefesh and accounting, over the meaning and responsibility of Israeli citizenship. Over what we owe each other and, more importantly, what we owe to the other. COVID-19 has reminded us that as humans our destiny is shared. As Israelis, it has reminded us that beyond our tribal, ethnic, religious, political, and national divides, our future is dependent on each other. Not today, but, tomorrow, we all need to think individually and collectively, what this truly means for our future – together. Today is a time to embrace our responsibility to each other, as fellow humans created in the image of God.