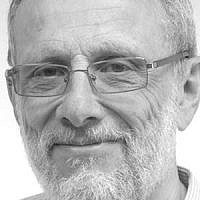 The Blogs
Peter Mond
Apply for a Blog
Advertisement
Please note that the posts on The Blogs are contributed by third parties. The opinions, facts and any media content in them are presented solely by the authors, and neither The Times of Israel nor its partners assume any responsibility for them. Please contact us in case of abuse. In case of abuse,
Report this post.

No, I am not referring to thoughts about Coalition negotiations, or the situation in Baltimore, Nepal, Yemen or the Ukraine, although they all provide plenty of food for thought. I am referring to the most commonplace of situations. Whilst praying last week in a synagogue in the Old City of Tsfat, thoughts came to me which disturbed my praying.

The train of thoughts began with an episode in Auschwitz, described by Victor Frankl in his book ‘Man’s Search for Meaning’; in his words perhaps the deepest experience he had in the camp. He arrived there with the manuscript of his first book hidden in his clothes, but on arrival he had to give up his clothes and subsequently lost his manuscript. Thus he was forced to undergo the loss of his mental child and he found himself confronted with the question whether under such circumstances his life was ultimately void of any meaning.

Instead of the manuscript he found in his new rags a page from a Siddur, containing Shema Yisrael. This “coincidence” he understood as a challenge to live his thoughts instead of merely putting them to paper. Meaning connects things; in this case finding a connection between these two events gave meaning, a new direction in Frankl’s life.

Why these thoughts now? Frankl stresses the importance of responding to a situation, that is taking responsibility for our response. In his book he describes situations in the personal here and now of Auschwitz; but what happens when the events take place in the impersonal there and then of the world?

For example last week there occurred a number of minor events. They appeared rapidly on the scene and then disappeared almost immediately; like for example the Iranian seizure of a Marshall Islands flagged ship; the Undersecretary of State for Political Affairs, Wendy Sherman, reiterating the American government’s unveiled threat not to veto a U.N. proposal to set up a Palestinian state; warm and welcoming Scottish hospitality for Azzam Tamami, Hamas’s special envoy to the UK; and Gulzabeen Afsal, a Tory Council Candidate referring on Facebook to the leader of the Labour Party, Ed Miliband, as ‘the Jew’; minor events indeed.

In retrospect it was not Frankl’s story that was disturbing me, but his message, as it resonated with my frustration.

Everyday choice he says is at the center of human experience. Every day, every hour, a person is offered the opportunity to make a decision, a decision which determined whether you would or would not submit to those powers which threatened to rob you of your ‘self’, your inner freedom. (Frankl 2006 )

But what decision do I have to take? Seemingly none, yet I often find myself submitting to what Lee Harris in “The Suicide of Reason” describes as the power of historical momentum. A player on the stage of history has historical momentum so long as he is the one who is making the moves, while everyone else is in the passive position of simply reacting to these moves…..Muslims are using the politics of fanaticism to do what fanatics have always done best, namely to seize the historical momentum. (Harris 2007)

The West has lost the historical momentum. I am just another micro example of that process. But Frankl came to remind me that I cannot let myself off the hook; annoyance, anger, outrage have not much effect, neither a march of a million. The day after the killings in Denmark the only Jewish radio station shut down voluntarily; why, because they were suddenly a security risk with no protection. Who has the momentum?

As an individual this question of momentum ‘burns under my fingernails’ to paraphrase Frankl. There are many organizations out there in Israel and beyond who are doing their best to slow down the momentum. Defending Jewish and Western culture requires a clear tone emphasizing the differences between the West and Islam. As one ex-Al Qaeda member said so succinctly when asked why he left the organization: because there is no room for the other.

Where is there room for women, Christians, Bahai, Jews, Israelis, homosexuals, Yazidis, Black Sudanese, Nigerian schoolgirls, Kurds and more in the Islamic world?