The Blogs
William Hamilton
Apply for a Blog
Advertisement
Please note that the posts on The Blogs are contributed by third parties. The opinions, facts and any media content in them are presented solely by the authors, and neither The Times of Israel nor its partners assume any responsibility for them. Please contact us in case of abuse. In case of abuse,
Report this post. 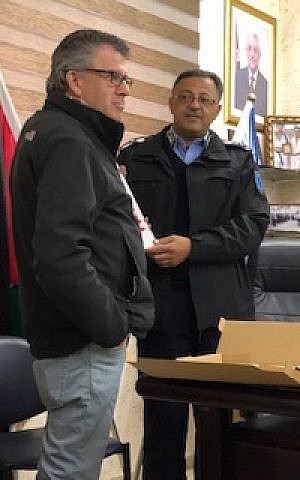 The production of suicide-bomber vests originated back in the year 2000 in the Palestinian town of Jenin.  A few years later a decision was made to encourage access to Jenin by Israeli Arabs in order to shop, do business, and promote investment in the community.  Today Jenin enjoys a strong GDP, low unemployment, and is almost never in the news associated with terrorism.  By taking responsibility, residents are shaping a brighter future.

A recurrent theme throughout this year’s New England ADL Law Enforcement Seminar in Israel on Resiliency and Counterterrorism was accepting responsibility for one’s plight.  When people do so, their lot improves.   When they evade it, it does not.  A dignified vision embraces accountability.  Indignant division embraces accusation.

A biblical Joseph is first separated from this brothers in the Nablus region, not far from present-day Jenin. Joseph models how to take responsibility for his plight.  He never see’s himself as a victim.  Instead of expressing self-pity or blame, rather than ruminating over “Who did this to me?”, he consistently considers, “What redemptive act has these events put me in a position to perform?”  In this week’s portion of Torah, when Joseph reveals himself to his estranged brothers, he strives to calm their anxieties.   “It wasn’t your fault.  Don’t be afraid.  Come close.  I’ll provide for you.  You are safe.  Bring our father.  Although your intent was hurtful, God’s designs were purposeful” (Gen.45:4-5, 8-9).

Enmity is not erased overnight.  Suspicion and ill-will may take generations to erode. But a core truth remains.  Coming together, connection, belonging – these things are good.  Isolation, estrangement, alienation – these things are not good.

Notwithstanding a current murderous terror wave that began this week with the murder of a baby whose lifespan lasted mere hours, meetings like ours with Col. Ala Shalabi, Commander of the Bethlehem Police District, demonstrate that coordinated efforts to cooperate and come together do persist.

Until violence is vanquished, may all who embrace benevolent responsibility find reward and renewal.