For much of the 20th century, the British Royal Family captured the world’s attention. Queen Elizabeth’s 1953 Coronation attracted an estimated 227 million viewers from across the world, a record at that time. Princess Diana’s wedding was viewed by 750 million people, while her funeral was viewed by 2.5 billion viewers. During the 21st Century the Royal Family remained an integral part of Britain’s appeal as a tourist destination with millions visiting Royal palaces and Royal dungeons or the dreaded tower of London.

Yet the Royal Family seems to have failed to adapt to the digital age. Unlike world leaders, that attract tens of millions of social media followers, Royal accounts arouse little interest. An analysis of the popularity of world leaders on Twitter, shown in the graph below, demonstrates that the Queen lags behinds all her peers. While Donald Trump attracted some 80 million Twitter users, and Pope Francis boasts a following of 51 million Twitter users, Queen Elizabeth and the Royal Family settle for a meager 4 million users. The heir (Prince Charles) and the spare (Prince William) are the least followed of all evaluated world leaders. 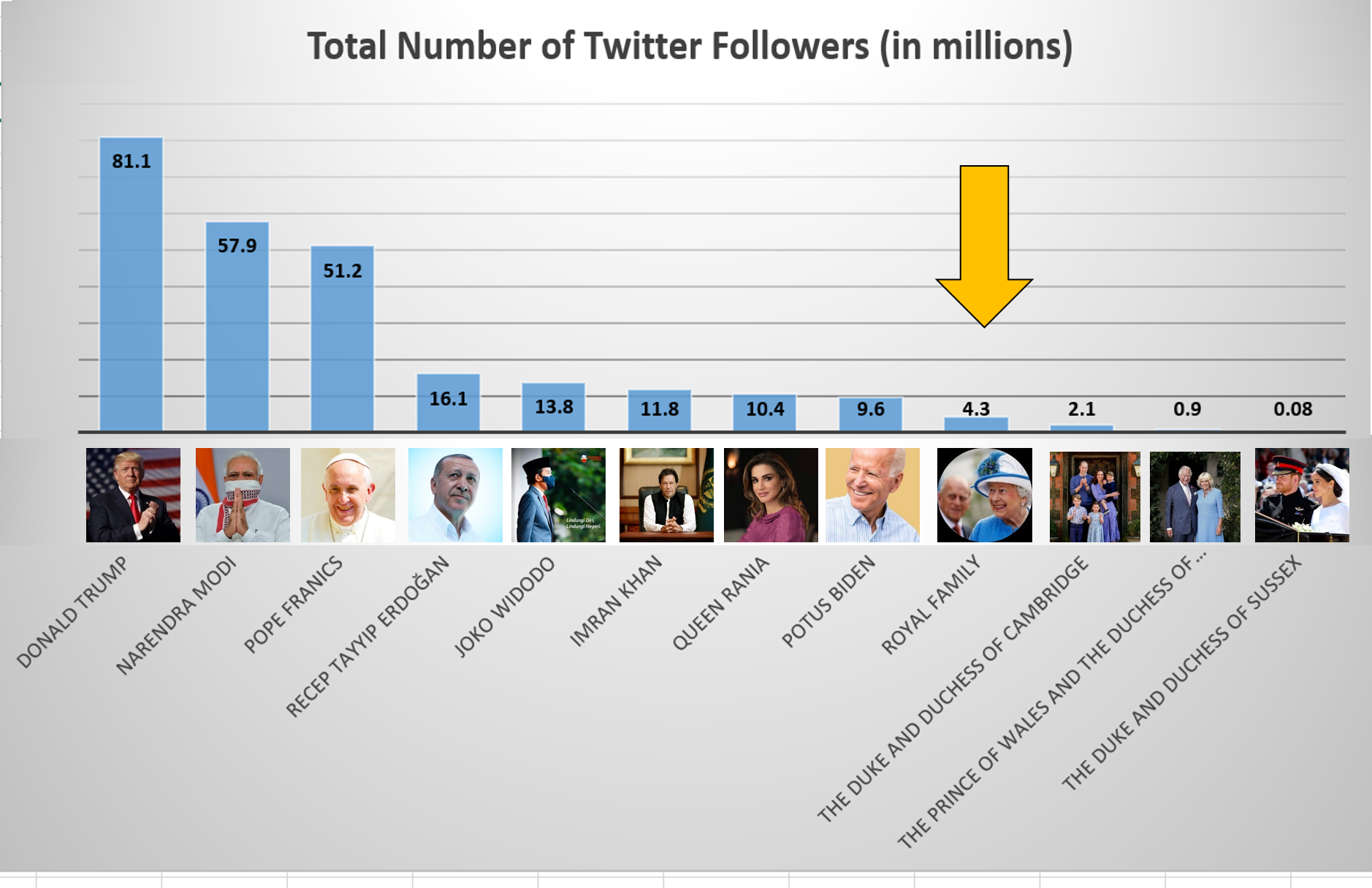 An interesting question is what accounts for this apparent lack of digital interest? Why was the Queen an analogue success but not a digital one? Those who are not historians of the Crown, may rely on the television show The Crown to answer these questions.

First, world leaders often attract the attention of digital publics by offering followers a ‘behind the scenes’ look at global diplomacy. Images circulated by world leaders can show them huddling with their peers at the sidelines of global summits, sharing jokes with one another and even rebuking diplomatic protocol. Such was the case when Indian PM Modi, and Israeli PM Netanyahu, dangled their feet in the Mediterranean Sea during an official state visit.

The Queen and the Royal Family cannot afford to expose the monarchy’s backstage. Their majesty depends on it. Strip away the Crown, the Scepter and the Palace and all you are left with is an average German family. It is the ornamentations, the golden staircases and the throne room that keep the Royal Family in power. ‘Behind the scene’ images would suggest that the Queen is not anointed by God but appointed by historical chance. Other world leaders amass followers by commenting on local and global events, while offering followers a prism through which the world may be understood. Leaders even comment on events as they unfold in near-real time. Israeli PM Netanyahu, for instance, used Twitter to lambast the 2015 Iran Deal and turn US public opinion against it. Donald Trump used his account to portray the US as a dominant global power that no longer required global alliances to maintain its security. Thus, he often attacked international institutions and military alliances such as NATO. President Biden has used his Twitter account to offer a counter-narrative whereby America would once again lead through diplomacy rather than force.

A strong European Union is in America’s interest. That's why yesterday, I met with @CharlesMichel and the @EUCouncil to revitalize U.S.-EU relations, as we partner up to combat COVID, tackle the climate crisis, and ensure democracies rather than autocracies set rules of the road. pic.twitter.com/a9QlGRh4DP

As a constitutional monarch, the Queen and the Royal Family have no opinions on matters of the day. They do not comment on the actions of foreign states; they do not criticize British foreign policy nor do they express support for, or opposition to the European Union. This again may prevent the Queen from attracting followers online, especially those eager to make sense of their world. Brits may be exceptionally eager to make sense of the post-Brexit world, one in which the UK’s power and prestige may be greatly reduced. Other world leaders use their social media to break taboos and social conventions. Pope Francis is one such figure as he uses social media to question many of the Church’s long held beliefs. From LGBT rights, to the position of women in society, Pope Francis is the ‘Pope that Rocks’. Conversely, Donald Trump and Turkish President Erdogan used social media to manipulate online conversations through outlandish language, half-truths and violent rhetoric. Indeed, many populist leaders use social media to attack familiar targets: the mass media which is controlled by the elites, political correctness through which elites control the norms of societies and science through which elites justify their policies.

No one can be excluded from the mercy of God. The Church is the house where everyone is welcomed and no one is rejected.

Yet no constitutional monarch can turn into a populist. A monarch must maintain the integrity and dignity of his/her office. A monarch’s tweets are more likely to be Shakespearean than Trumpian in tone and substance. Not to mention that monarchs are the elites and they could hardly attack the institutions that labor to keep the monarchy in place, including leaders and government ministers.

Finally, some leaders attract followers by using sophisticated humor. They attack their peers, yet in a way that rests on levity and maintains the covenants of diplomatic protocol. One poignant example was the image of Donald Tusk presenting the British PM Theresa May with a cake that included no ‘cherry picking’, a deliberate yet subtle attack on the UK’s negotiating tactics post-Brexit.

This avenue is also blocked for the Queen that could never officially criticize a foreign leader. More than anything, it should be assumed that all Royal tweets are reviewed and approved by both Buckingham Palace and the government, preventing the Queen from commenting on world events as they unfold. These limitations give way to a dull Twitter account filled with images of Royal visits and Royal gardens; a static album of an aged monarchy searching for a place in the digital world. Yet not all is lost. When examining which world leaders attract the most journalists and news organizations, the Queen ranks third after President Biden and Pope Francis. 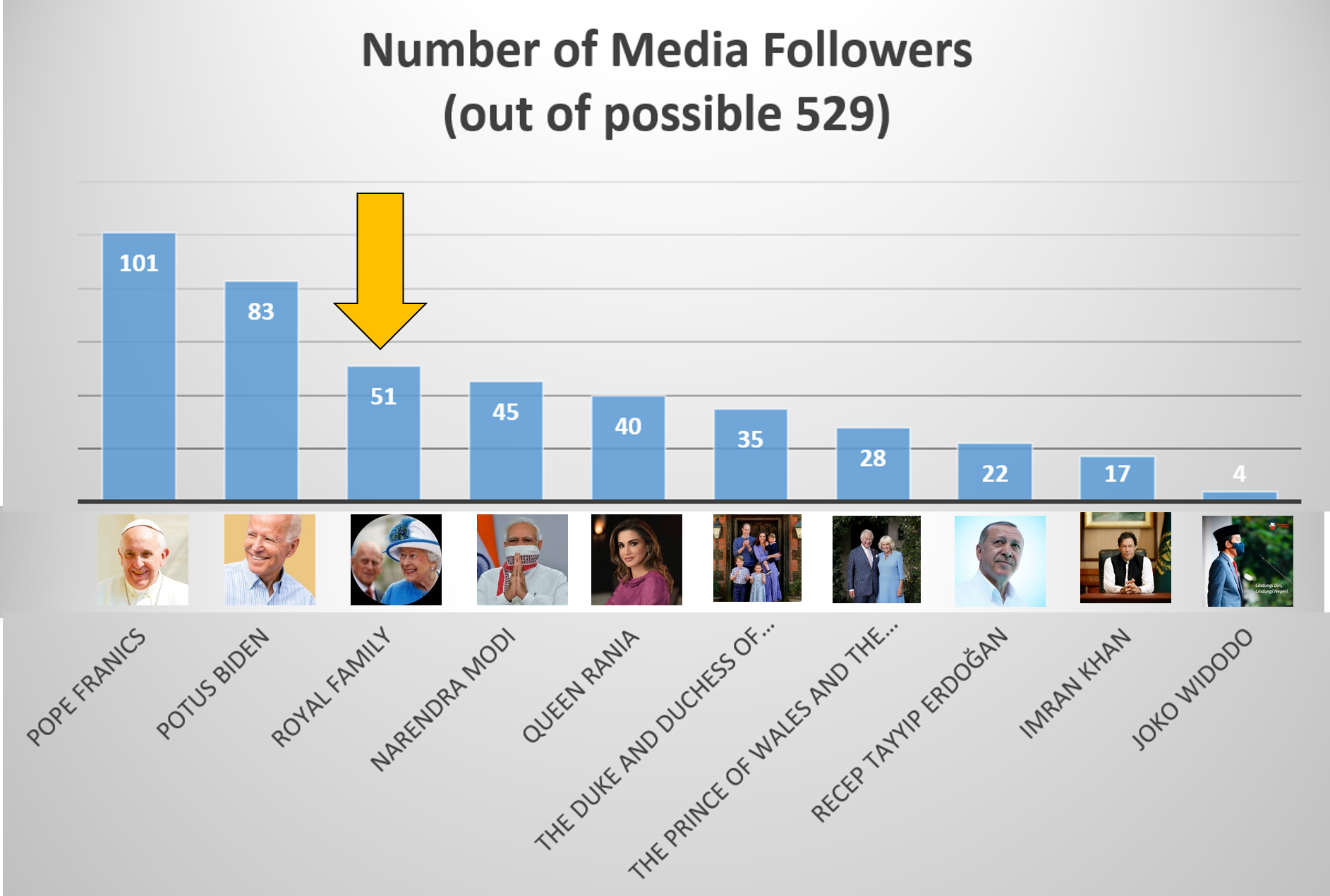 This suggests that when the Queen does speak, the world listens. I say the world as the sample I used to measure media followers includes both global media outlets, such as CNN and the BBC, as well as the most read publications in diverse regions including Eastern Europe, Africa, South America and South East Asia. Through media re-tweets, Royal tweets can make their way to a global, digital public. When examining diplomats, I also found that the Queen and the Royal Family surpass many world leaders. The Queen is the third most followed world leader among foreign ministries (sample of 100 MFAs on Twitter), and the fourth among Ambassadors (sample of 950 Ambassadors on Twitter). Diplomats may follow the Royal Family as Royal statements can serve as diplomatic signals sent on behalf of the British government. In such instances, the Queen becomes a spokesperson and a unique one at that given the integrity and respect afforded to her station. 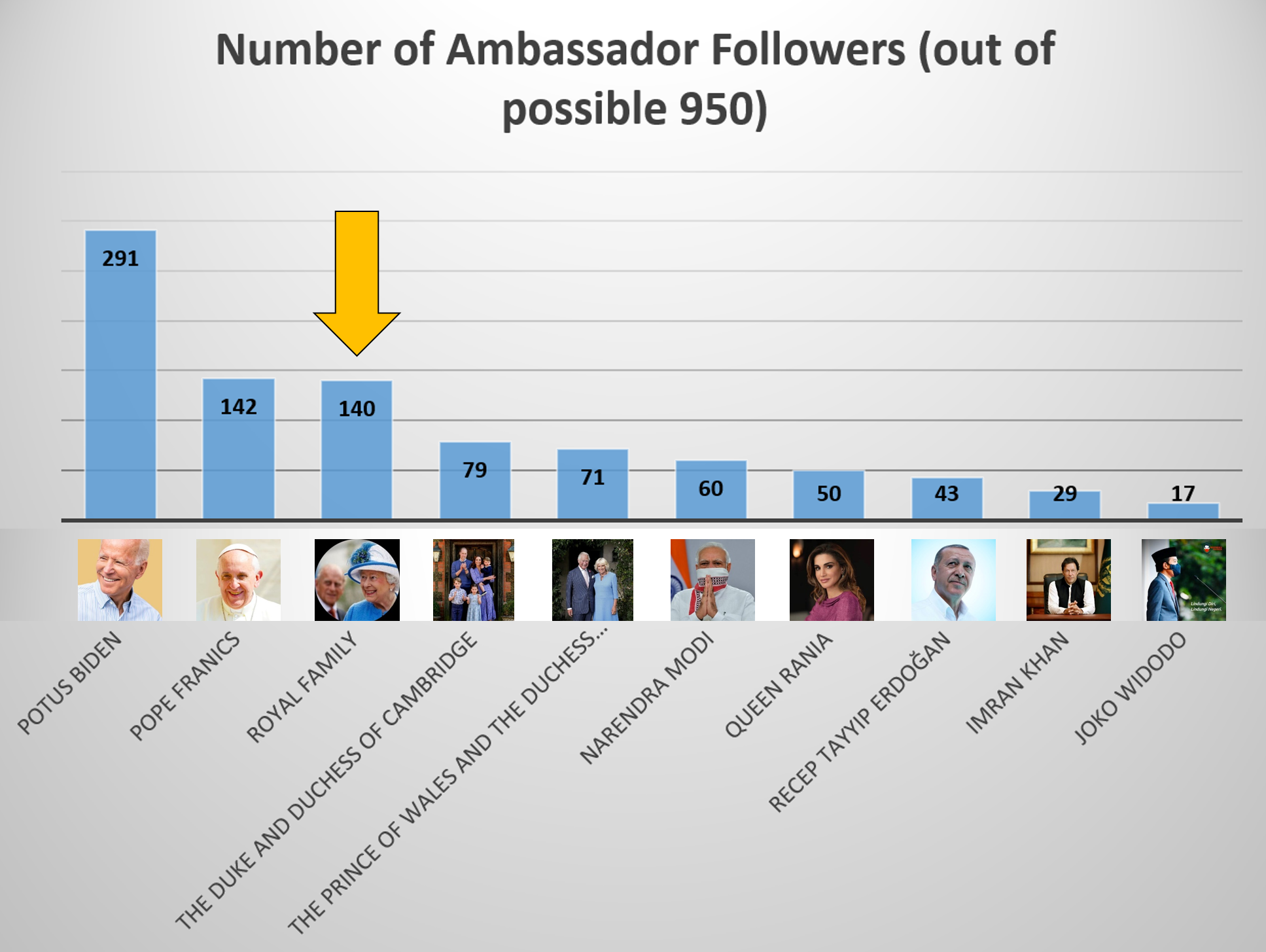 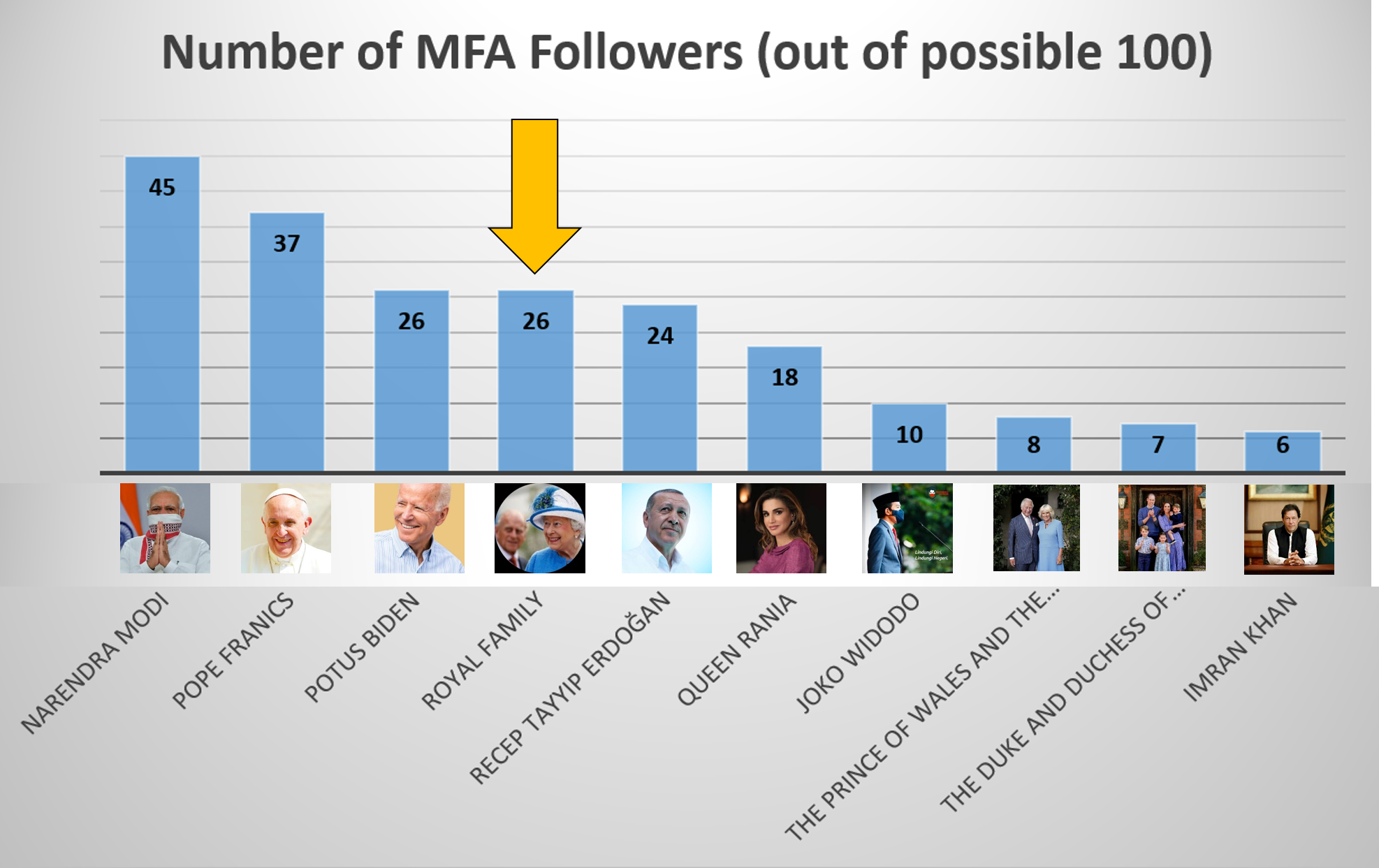 While attracting opinion leaders and policy makers is a digital feat, the awesome power of social media lies in attracting ordinary social media users from all over the world; in creating an account through which one can interact with foreign populations while contributing to national images and foreign policy achievements. In Nye’s terminology, the Royal Family is an important Soft power asset for the UK. Its digital failure may prevent the UK from leveraging such Soft Power towards diplomatic ends.