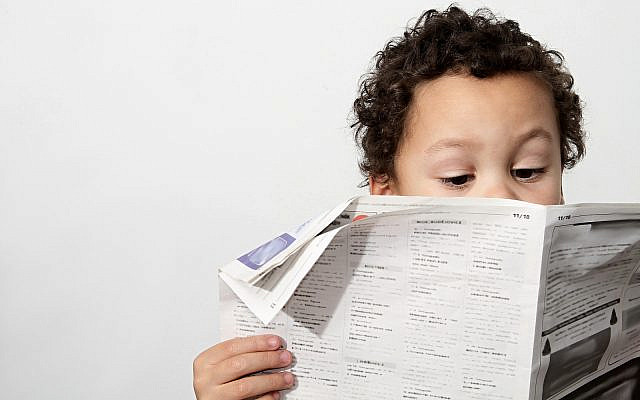 I had no intention of talking to my children about the violence that has erupted in Israel. But I should have known: working from home gave me little choice.

My 6-year-old son regularly runs into the room unannounced, peers over my shoulder, and asks about whatever happens to be on my screen, making it hard to hide the harsh reality. That charade becomes more challenging when he likes to read the newspaper. Yes, my son – lover of baseball, dinosaurs, Legos, and trucks – spreads out the pages of The New York Times every morning, chooses a story and reads to the end, even turning to the jump.

He also asks questions. “Why are they firing rockets at Israel, Mom?” “Why is Israel targeting tunnels?” And one time, when he peeked over my shoulder at my computer, “Why did your friend just write that she’s looking for a playground near a bomb shelter?”

It’s been frustrating to see the strident voices on social media condemning one side or the other. Plowing through the propaganda takes time and effort that many are simply not willing to invest. They go with their gut or echo their peers. Watching my son gather facts to form his own opinions has been both heartening and heartbreaking.

My son was born four days before the 2014 Gaza War began. I listened to radio reports while nursing him, gazed into his wide, inquisitive eyes, and whispered in his ear that perhaps he entered the world exactly when we needed him. “One day,” I would whisper, “you just might be a peacemaker.” Call it what you want – postpartum delirium, whimsical expectations of a new mother – I just had a feeling.

Now, seven years later, he’s processing yet another conflict between Israel and Hamas. This time around, I’ve appreciated the advice of social scientist Sivan Zakai who directs a project at Brandeis University titled “Children’s Learning About Israel.” During that terrible clash between Israel and Hamas in 2014, she interviewed dozens of Jewish elementary school children about how they process the Israeli-Palestinian conflict. Bottom line: we tend to underestimate our kids.

When children learn to read fluently like my son, she says, they recognize when they’re not getting both sides of the story. They don’t appreciate it when grown-ups try to shield them from the facts. In other words, children like to make informed decisions. We adults could learn a thing or two.

All children develop at a different pace, learning to walk, talk, and read at various stages. I argue the same is true when it comes to learning empathy. Though Zakai says cognitive empathy does not develop until children reach fourth or fifth grade, conversations with my son indicate that he already grasps the importance of putting himself in someone else’s shoes. He also understands that not every government is a democracy, no community – be it Jewish, Arab, or Palestinian – is monolithic, antisemitism is real, and Israel is often a target.

But Zakai assures us that our children look on the bright side. They are visionaries who view chaos and destruction as opportunities to build a better world. She makes a similar argument for not shielding our children from news about the rise of white supremacy, racism, and antisemitism because children will see these as openings to repair the world.

In another seven years, our son will be bar mitzvahed, processing these issues on a whole new level. I pray that we will see a peaceful resolution by then.

A version of this piece originally aired May 14 on People of the Pod, a podcast about global affairs through a Jewish lens by American Jewish Committee. In the same episode, the author interviewed AJC Director of Contemporary Jewish Life Laura Shaw Frank about the Pew Research Center’s just-released Jewish Americans in 2020 report. Listen here.