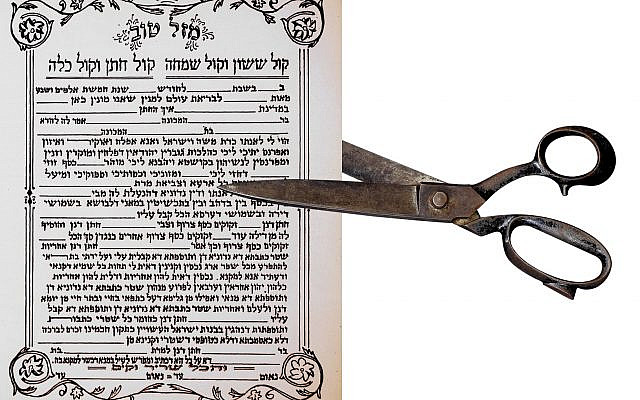 Two very common words for “document” in Rabbinic Hebrew make absolutely no appearances in the Bible: gett and shtar. The actual Biblical term “Sefer HaMiknah” (“Scroll of Acquisition”) appears five times in Jer. 32, making it the standard — or only — word in Biblical Hebrew for a “document of sale.” In this article we will focus on the words gett and shtar, seeking to better understand their etymology and how they are used.

The word gett (plural: gittin) technically refers to any type of document, but is often attached to a modifier to explain what type of document is under discussion: a gett ishah (“woman’s gett”) refers to a writ of divorce, a gett shichrur (“gett of freedom”) refers to a freed slave’s writ of emancipation, and a gett chov (“obligatory gett”) refers to an IOU (Gittin 10a, Bava Kama 95a, Bava Basra 160a). Nonetheless, the default gett in colloquial terms refers specifically to a bill of divorce (see Rashi to Gittin 65b and Maimonides’ commentary to the Mishna Gittin 2:5), as we shall see below. In Biblical Hebrew, by the way, a bill of divorce is called a Sefer Kritut (Deut. 24:1-3, Isa. 50:1), literally “Scroll of Cutting.”

The Tosafists (Gittin 2a) cite Rabbeinu Tam as explaining that a bill of divorce contains twelve lines of text because it is called a gett (GIMMEL-TET), and the gematria (numeric value) of the word gett equals twelve. Some authorities understand the Tosafists to also be explaining why a bill of divorce is called a gett (as opposed to a shtar). This assumption is shared by Rabbi Shmuel Eidels (Maharsha, 1555-1631), Rabbi Meir Shiff (Maharam Shiff, 1608-1644), and Rabbi Eliyahu Spira (Elyah Rabbah, 1660-1712), even though Rabbi Yom Tov Lipmann Heller (Tosafos Yom Tov, 1579-1654) criticizes this assumption for not heeding closely to the Tosafists’ actual words (see Rabbi David Tzvi Fetene’s Maharsha HaAruch who resolves this difficulty).

Rabbi Eliyahu HaBachur (1469-1549) in Sefer HaTishbi also quotes the Tosafists as saying that a bill of divorce is called a gett because it has twelve lines, and questions this explanation on two grounds. Firstly he notes that other documents (like a written loan) are also called a gett, yet the legal requirement of twelve lines does not apply to those documents. Secondly he notes that the Tosafists have failed to explain why the bill of divorce must be called “gett” as opposed to a word derived from any other two-letter combination whose gematria would equal twelve (like DALET-CHET, HEY-ZAYIN, or TET-GIMMEL).

After citing HaBachur’s questions, Rabbi Yisrael Yaakov Algazi (1680-1757) writes that he heard a different explanation for why a bill of divorce is called a get. Since divorce serves to separate a man and woman who were previously married, this schism is best reflected in the word gett because it is comprised of a combination of two letters which never appear next to each other in that order anywhere in the Bible! (Interestingly, Rabbi Algazi asserts that every shtar can also be called a gett, but not every gett can be called a shtar. Based on this, he rules that communal enactments which were explicitly said to govern a shtar do not apply to a gett.)

The Vilna Gaon in Divrei Eliyahu also says a similar thing about the letters GIMMEL and TET never appearing next to each other in the Bible. The earliest known source for this explanation is in Sefer HaChaim by Rabbi Chaim of Friedburg (1520-1588) — the oldest brother of the Maharal of Prague (1525-1609). He writes that because G-d so much dislikes divorce, He made sure that the letters GIMMEL and TET, which spell out the word gett,never appear next to each other in that order in the entire Bible.

Rabbi Meir Mazuz writes that even though there are other combinations of two letters that never appear side-by-side in the Bible besides GIMMEL-TET (e.g., GIMMEL-KUF and SAMECH-TZADI), those other combinations are all of letters pronounced through the same parts of the mouth, while the letters GIMMEL and TET are pronounced through different parts of the mouth, yet still never appear in the Bible in that order. Moreover, he notes that the other two-letter combinations are difficult to pronounce, and so they were not in the running for becoming the word for a “bill of divorce.” Finally, Rabbi Mazuz adds, that although there are other pairs of letters that do not go together, GIMMEL and TET are the earliest ones in alphabetical order that are incompatible with one another. Rabbi Chaim Kanievsky in Taama DeKra (to Deut. 24:1) also proffers this last point to answer the question. (A computer search of the entire text of the Bible reveals that the letters GIMMEL-TET are never juxtaposed to each other in the same word, but in Ezek. 22:25 they are juxtaposed with a space in between them to separate between words. For further discussion, see Rabbi Aryeh Leib Tzintz’s introduction to his Seder HaGett.)

Rabbi Yehoshua Boaz (1518-1557) in his commentary Shiltei HaGibborim (Mordechai, Gittin 1) cites a non-extant Midrash that refers to a type of gem called getta in a far-off island that has a special charm of being able to ward off people. Based on this, he explains that a bill of divorce — by which members of a married couple officially “repel” one another — is appropriately called a gett.

Rabbi Moshe Sofer (1762-1839) cites another tradition about this gem, which says that its charm is actually to attract people, not repel them. In order to determine which version of this tradition is most accurate, Rabbi Sofer turns to a different work entitled Shiltei HaGibborim (written by Rabbi Avraham the Physician of Portleon) which, inter alia, discusses different gems and their charms. That work discusses a stone known as “gagate” — that if rubbed, is said to attract straw. Based on this, Rabbi Sofer concludes that in the former Shiltei HaGibborim as well, the getta stone refers to something that has the power to attract, not repel. Accordingly, Rabbi Sofer explains that all legal documents are called a gett because they bridge the gap between people (like between a lender and borrower, or a buyer and seller) and bring them together. On the other hand, Rabbi Sofer explains that the term gett in the sense of a divorce document is less readily understood, which is why the explanation above (about it having 12 lines) had to be proffered.

Tosafot Chachmei Anglia(Gittin 2a), Orchot Chaim (Hilchot Gittin), Kolbo (76), the glosses to Rabbi Yaakov Margolis of Regensburg’s Seder HaGett, and the Levush (Even HaEzer 125:11) all explain that gett is an expression of “breaking” or “cutting,” thus mirroring the Biblical term for a bill of divorce. These sources cite a no longer extant passage from the Yerushalmi that uses the word in such a way. Rabbi Shlomo Aharon Wertheimer (1866-1835) similarly suggests that gett is an expression of “erasure” (see Rashi to Brachos 56a). Despite all of these explanations, the scholarly consensus is that the Mishnaic Hebrew term gett is a loanword borrowed from the Akkadian gittu, meaning “a (single-column) document.”

The late Rabbi Eliezer Herstik wrote that some explain that the word ghetto (the section of Rome to which the Jews were confined for living) is derived from the word gett — “chased away.” Another popular theory about the origins of the word ghetto is that it is derived from the Italian word borghetto (“small part of a city”), which is, in turn, derived from the Germanic burg (“fortress,” “city,” “town”), the equivalent to the English word borough (and the Old English suffix –bury). Others explain the etymology of ghetto as deriving from the Venetian word getto (“metal foundry”), as near the Jewish ghetto in Venice there was such a factory. Finally, others claim that the Italian word ghetto is derived from the Latin Aegyptus (“Egypt,” where the Jews were first ghettoized when exiled and enslaved there in Biblical times).

As mentioned above, the word shtar (plural: shtarot) in the sense of a “bill” or “document” does not appear anywhere in the Bible, but is quite common in later rabbinic literature (like in the Bar Kochba Letters and the Mishna). It too is often attached to a modifier to explain what type of shtar is under discussion: shtar chov, shtar erusin (Kesuvos 102b, Kiddushin 9b), shtar nisuin (Bava Basra 167b) shtar amanah (Kesuvos 19a, Gittin 19b, Bava Basra 49a, 154b), shtar arisot (Bava Basra 167b), shtar berurin (Moed Katan 18b), shtar mivrachat (Kesuvos 79a), and more.

In Meturgaman, HaBachur’s lexicon of Targumic Aramaic, HaBachur has two separate entries for the root SHIN-TET-REISH. The first entry is an Aramaicization of the Hebrew root SHIN-TET-REISH, which refers to “policing” or “enforcing” the law (shoter/shotrim), while the second entry consists of examples of shtar in the sense of a “document.” He thus understands the two meanings of this root to be separate. On the other hand, Rabbi Samson Raphael Hirsch (to Ex. 5:6) explains that a shtar is called so because it is a creditor’s best means for presenting his grievances and “enforcing” his dues, thus understanding that both words derived from the SHIN-TET-REISH root are related.

Dr. Chaim Tawil defines the Biblical Hebrew word shoter as a “record-keeper” or “organizing officer,” and connects its root to the Akkadian verb sataru that means “to write.” Tawil explains the difference between shoter and sofer in Akkadian by noting that although both words refer to a scribe, the former is specifically a civil servant who is an official scribe, while the latter refers to any type of scribe.

Interestingly, the Old English word starr is a corruption of the Hebrew shtar and referred to documents or contracts held by Jews. After the Jews were expelled from England in 1290, this word fell into disuse until it was revived by later scholars like the English parliamentarian John Selden (1584-1654).

ANNOUNCEMENT: My interview on the Beyond the Book podcast premieres tomorrow on YouTube, don’t forget to tune it!