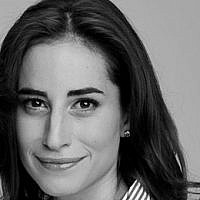 The Blogs
Batsheva Neuer
Apply for a Blog
Advertisement
Please note that the posts on The Blogs are contributed by third parties. The opinions, facts and any media content in them are presented solely by the authors, and neither The Times of Israel nor its partners assume any responsibility for them. Please contact us in case of abuse. In case of abuse,
Report this post.

Consider Abbas’ latest op-ed, entitled “Palestine’s vision of peace is clear” comic relief. The romantic rhetoric is all there: “peace”, “normalization” and “reconciliation”. All it’s missing is: the truth.

We want to believe you, President Abbas. And maybe, if we weren’t hiding in bomb shelters, dodging rockets launched by your “unity” partner, we could try. But, now? Nu, be’emet.

The articled, published in honor of the Haaretz Peace Conference, argues that the Palestinians have long been ready for peace and that the roadblock to a two state solution is settler violence and Israeli exploitation.

Here’s what Abbas said and what he withheld:

Nonsense. While then PLO leader Yasser Arafat announced in Geneva his recognition of UN resolutions 242 and 338, Israel’s right to exist and renounced terrorism, his legacy proved otherwise. Between his Oslo humbug handshake—that catalyzed an era of epic, diplomatic failure—and his death in a Paris hospital, Arafat was responsible, either via direct, or indirect command, for thousands of casualties. Through his encouragement and financial support, groups like Tanzim and Al Aqsa Martyrs Brigade carried out tens of terror attacks. He financed suicide bombings, paid operatives, and funded explosive materials, manufactured locally, or imported from abroad.

As of 1997, Arafat authorized Hamas and Islamic Jihad attacks; he formed an umbrella group together with these Islamists organizations called the “Nationalist and Islamic Forces” that coordinated attacks against Israel, during the recent intifada, under the leadership of Fatah.

As of 2003, according to the head of Israeli military intelligence, Maj.-Gen. Zeevi-Farkash, orders for terrorist attacks were actually coming directly from Arafat’s headquarters.

Coined by Dershowitz as the “godfather of international terrorism” and the inspiration for Osama Bin Laden, Arafat’s legacy was one of publically promulgating peace while privately coordinating deliberate attacks on innocent civilians.

According to OneFamilyFund, excluding the latest rocket barrage, the last nine months have seen over 1,000 terror attacks on Israel, roughly 120 each month.

In June, Abbas’ support of terror went from covert to overt: he shamelessly picked at Hamas’ cuffs, liberated the terror group from international isolation, and gifted them the key to impunity by joining forces.

Israel grants the Palestinian Authority (now, Hamas too) $100 million dollars monthly– nearly 2/3 of its budget. That would be the equivalent of America transferring $22 billion dollars, annually, to Iran. And where does the money go?

In 2012, Arafat’s former financial advisor revealed what we already knew: hundreds of millions of dollars channeled to the Palestinians by EU, US, and Arab donors were being embezzled by its leaders. Another use of funds went to stipends for convicted terrorists.

And, while average minimum wage is $376/month, Abbas is worth an estimated 100 million dollars. Who is exploiting who?

Abbas quotes President Kennedy: “We cannot negotiate with those who say, ‘What’s mine is mine and what’s yours is negotiable.’

Here’s another Kennedy quote to consider: “The great enemy of the truth is very often not the lie, deliberate, contrived and dishonest, but the myth, persistent, persuasive and unrealistic.”

Abbas’ words perpetuate the very myth that leaves the world supine in the face of a continued barrage of rockets on Israeli children. He ends by inviting Israel to make a “historic compromise”. But before Israel makes any move, Abbas must end the paradoxical pastiche of his unity government with Hamas, cut the funding of terrorists and quit sponsoring hate. Everyone knows that fact is better than fiction. It’s time for him to know it too.

About the Author
Batsheva Neuer teaches Jewish thought at Touro College and is pursuing a doctorate in New York City. Her articles appear in The Wall Street Journal and Washington Post. Follow her @baneuer
Comments