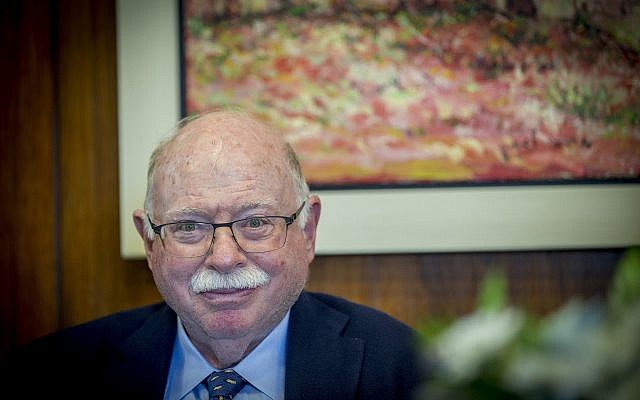 Michael Steinhardt attends a meeting at the Knesset in Jerusalem on April 26, 2017. (Yonatan Sindel/Flash90)

It’s not every day that a billionaire with a track record of making big donations to Jewish causes gets in big trouble. But with the accusations of sexual harassment against him, Michael Steinhardt, the co-founder of Taglit-Birthright Israel, is there.

In a public Facebook post, Rabbi Shira Stutman wrote about when she “was 21 years old and in Michael Steinhardt’s office, part of a group of three college students asking for money for a project into which we were pouring our hearts and souls.” She said she has made many such “asks” over the years, but something happened with this one that made it unforgettable for her. Steinhardt called two single men with kippot into the office and “asked one of us, a dati (religious) woman, to stand and do a 360. She did. He said to the guys, ‘any of you want her?’ The guys said no, they left, we all thought it was a big joke.”

It sure doesn’t sound like a funny joke to me now reading the words on the page, and it doesn’t sound funny to Stutman, today, either: “Turns out, this is no Purim Torah. It’s not funny,” she wrote.

I only met Steinhardt once, as part of a small group of students in the Education and Jewish Studies program at NYU’s education school which is named after him. He made some very inappropriate, sexualized comments in front of this group that included intelligent, ambitious women professionally committed to working for a strong Jewish future. I don’t remember if any of us talked about it afterwards. I think I was caught kind of like a deer in the headlights — too overwhelmed by this man’s wealth and power, the power that could make a huge difference in the career prospects of any one of us, to speak the feelings that his creepy and demeaning remarks brought up in me. And, after all, he didn’t actually touch anyone. (And, at least so far, none of the public accusations against him involves inappropriate touching.)

But here’s the thing that I haven’t seen talked about anywhere else. His actions and comments — both at NYU and with Stutman — were directly connected to his philanthropic vision for the Jewish world. That is, he harassed and gave money for more or less the same reasons, which leaves us with some unique questions about how to deal with him. Steinhardt is, as I think he would say if he were sitting in front of you today, very interested in there being more Jews. He wants Jews, especially secular American heterosexual Jews, to meet each other (preferably while young), get married and have babies. That’s what Birthright is all about from his perspective. It’s about his commitment to this particular kind of vision of how to build a strong Jewish future. And, to all indications, his harassing comments were also about trying to build a  better future by encouraging young people to couple and, ultimately, make more committed Jews.

None of this justifies anything he said or did with women (and I know many out there think that this Birthright-style approach — and thinking of women’s bodies primarily as a means of reproduction — is a wrongheaded way to think about building a strong, meaningful Jewish future). But it still leaves the question of what we do now.

Do we, as Hillel is reported to be doing with at least one grant, turn away money from his foundation? Or, do we have to go farther? Do we have to start treating him as a kind of persona non grata, blotting out his name like the name of Amalek. Taking his name off of NYU’s Steinhardt school? Refusing not just his money, but to answer his phone calls?

All this made me think of the New York Times Magazine writer and Slate pundit, Emily Bazelon. In a roundtable that appeared in the Times on December 12, she said, “I realize a lot of people think now isn’t the right time to worry about whether men get to come back from being exiled. But when courts of law decide cases, they determine the term of punishment up front. We don’t have a clear way to do that in the court of public opinion.”

This one-size-fits-all kind of reaction in the public sphere worries me. And Bazelon: “I do worry about lifetime banishment for some people. I also worry about due process.”

But, as a person of faith, I’m not just worried about due process, I’m also worried about the possibility of redemption — of teshuvah and of shalom — and about how we follow the command to choose life, בחרת בחיים. My experience as a chaplain and spiritual caregiver has shown me that people are always — even in their later years like Steinhardt is — capable of true remorse and deep change.

Does Steinhardt feel that kind of deep remorse that is necessary to activate change? Is he willing to genuinely request forgiveness from those he has hurt in the way necessary for true teshuvah? Will he be able to recognize that even if he continues to believe in, and fund, the same Jews-increasing mission, that doesn’t justify any demeaning and harassing behavior with individuals?

I don’t know. But it worries me that we seem to be automatically putting someone like him in the same basket as the Harvey Weinstein’s and the Matt Lauer’s — people who did what they did, including touching people with their sexual organs, purely for selfish, power-wielding sexual gratification. Steinhardt, at least from what we know so far, is something else. I truly don’t know if we should treat him differently, but I’d like to think we could at least talk about it.

Maybe it’s too soon. There’s a flood of anger and outrage being released today by those who have endured countless acts of sexual harassment and assaults. It was held back for so long, and it’s to the great benefit to us all that voices long repressed are finally being heard. There’s so much teshuvah that needs to be done and healing that needs to happen. I pray that it will. And for shalom, peace and wholeness.

About the Author
Alan Abrams is a spiritual care educator who made Aliyah in 2014. He and his wife live in Jerusalem with their two "sabra" children. Alan is the founder of HavLi and the HaKen Institute, spiritual care education and research centers based in Jerusalem. A rabbi, Alan received a PhD in May 2019 from NYU for his dissertation on the theology of pastoral care. He was a business journalist in his first career.
Related Topics
Related Posts
Alan Abrams
Comments