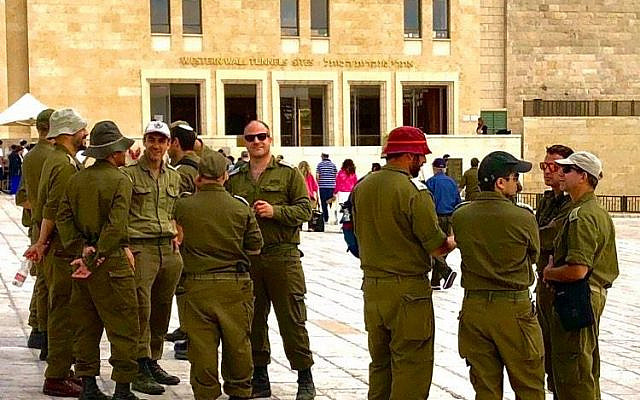 When a man marries a new wife, he shall not go out to the army, nor shall it obligate him for any matter; he shall be free for his home for one year, and he shall gladden his wife whom he has married.

This reminds us of the verses that were recited on the border of Eretz Yisrael that we read in last week’s Parsha, Parshat Shoftim (Dvarim 20:5-7) about those who are unqualified to fight:

The rabbis taught in a Braita: The verse in Ki Tetze states “he shall not go out with the army.” It could be thought that it is with the army that he does not go out, but he must go out to supply water and food to the troops and he must go out to repair the roads for the passage of the army. The Torah therefore states “nor shall [army service] be placed upon him regarding any matter.”

This teaches that the army has no claim on the groom who is within his first year of marriage whatsoever, not even for rear-echelon duties. Unlike the man who betrothed a woman but did not marry her yet, the man who built a home and did not yet inaugurate it or a man who planted a vineyard and did not redeem it yet. Those three categories would still be obligated in going out to perform the rear-echelon duties.

The Mishna, Sotah 44b states: The cases above, where the man would be exempt from fighting in the war all refer to a “milchemet reshut”, a voluntary war. However, in the case of a “milchemet mitzvah”, an obligatory war, all go out, even a bridegroom from his chamber and a bride from her chuppa.

The wars fought in Israel today fall under the category of “milchemet mitzvah”, obligatory wars (as described by the Rambam in Hilchot Melachim 5:1) since we are conquering the Land of Israel, protecting it and saving Israel from the enemy. Therefore, the groom would be obligated to go to war and according to some opinions even the bride, if not to fight, then to supply food and water to the soldiers.

During the last war in Israel, “Shmorei HaChomot,” there was at least one case of a bride and groom who had just gotten married that went directly to serve in the army. This is the reality that we live with.

May the time come when we will have true peace in Israel and will no longer have to send our brides and grooms out to fight.