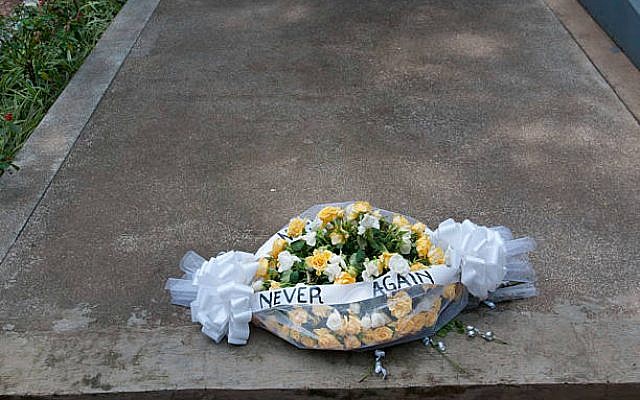 A wreath laid on a grave where 250,000 people murdered in the 1994 Rwandan genocide are buried. (c) Getty Images

Never again is the anguished cry of Holocaust remembrance, seeking to find a meaning from the suffering. But can we still say never again when genocides have happened again, and again, and again? Does the phrase still have meaning?

In his Nobel Peace Prize acceptance speech, UN Secretary General Kofi Annan said “A genocide begins with the killing of one man – not for what he has done but because of who he is.”[1] Is this what we mean when we say never again? Never again will we allow genocide to happen? Never again will we permit people to be killed not for what they have done but because of who they are?

We have repeatedly failed to prevent genocide. Since the Holocaust, our history has been littered with attempted genocides: Cambodia, Rwanda, Bosnia, Darfur, Iraq, Burma. The list goes on and on. The Holocaust was not the first, nor was it the last.

So, can we still say never again if it keeps happening again?

The word “genocide” was, in fact, invented to describe the crimes of the Holocaust. Since that time, we have become more aware of genocidal crime across the world. Although we have not been able to prevent many genocides, our awareness of this crime has led to international action.

The 1995 genocide in Bosnia-Herzegovina was curtailed by a NATO bombing campaign, initiated in response to the massacre of Muslims in Srebrenica. The 2017 Yazidi genocide in Iraq was significantly alleviated by international intervention. The Burmese Rohingya have found safe haven in neighboring Bangladesh. We have come a long way since the Jews of Germany had no where to flee to and no military action was taken against the death camps.

A Call to Action

The rabbis taught that “it is not your responsibility to finish the work of perfecting the world, but neither are you free to desist from it.”[3] In other words, even though we may not be able to prevent genocide, that does not mean we can ignore it.

In truth, we always knew that absolute prevention of genocide was an ideal. Never again does not mean no more genocide. It means no more indifference. No more pleading ignorance. No more saying “there is no way that could happen!” It did happen. And it will happen again unless we continue to say never again.

Never again means we will not stand by and watch as injustice and evil surround us. We will stand up and take action. We will not turn a blind eye to the suffering of others. We will choose to see. And in seeing, in fighting, in standing up, perhaps we will be able to prevent some of that suffering.[4]

[2] For a new way to commemorate the Holocaust that reflects this perspective, see www.HaShoahHaggadah.org

[4] Thanks to Rebecca Fripp for help on this post.