KFAR SABA — For children with Duchenne or Becker muscular dystrophy, having a specially trained dog doesn’t just relieve their loneliness. These service dogs also help patients in dozens of practical ways, doing everything from taking off shoes to picking up toys that fall on the floor.

Tali Kaplan, executive director of the Israeli nonprofit group Little Steps, said research shows that dogs can save up to 70 percent of the home care expenses incurred by disabled people, while providing loyal companionship.

“A dog is nothing like a scooter or a wheelchair,” said the organization’s chairwoman, Ziva Goldschmiedt, whose son, Adi, has Duchenne muscular dystrophy (DMD). “A dog is alive and responds to you — and also returns love.”

Adds the mother of Adam, 10, who also has Duchenne: “One day my son fell and couldn’t get up on his feet. He sent the dog to get help. The dog came to me and started rubbing my leg. I understood that something had happened, I took his leash, ran with him to my son and helped him stand up. Thank God we have this dog.”

Kaplan got the idea for service dogs about four years ago while attending a conference organized by Pat Furlong, founder of the U.S.-based nonprofit Parent Project Muscular Dystrophy (PPMD).

The organization reached a milestone in April 2015, when it took delivery of 14 puppies — at a cost of NIS 90,000 each — that were genetically chosen to be service dogs. Families pay up to NIS 3,000, and recently Israel’s Bituach Leumi agreed to fund 55 percent of the costs to train 15 additional dogs. 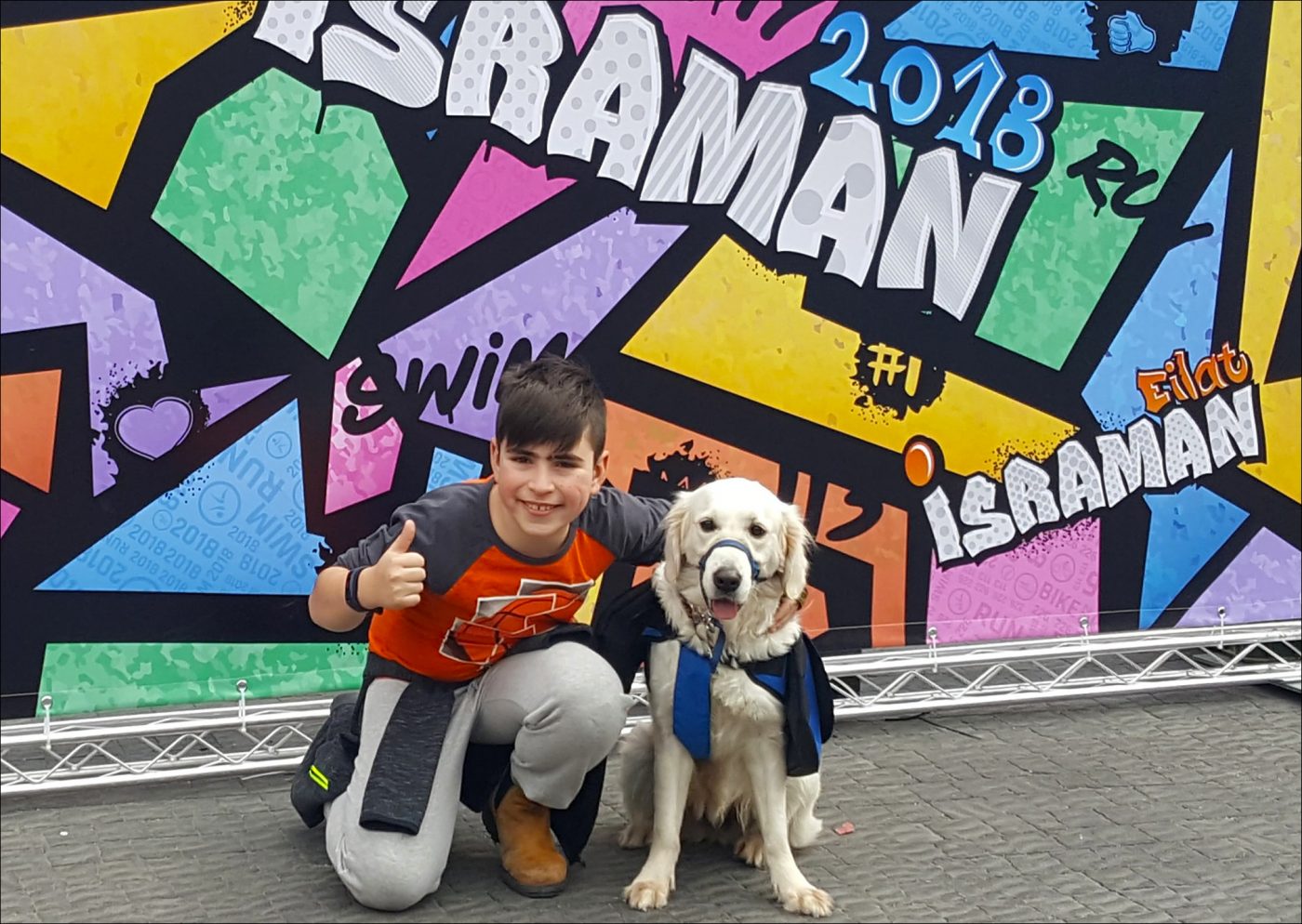 Ido Kaplan and his service dog, Minnie, at the Israman 2018 race in Eilat, Israel. (Amit Kaplan)

Training takes about a year and is supervised in Israel by Dudik Mazor, chief instructor of the K-9 training unit of Israel’s Zaka, which identifies disaster victims. Mazor has 20 years of experience teaching dogs to identify stressful situation for people with special needs. All the instructors under him are accredited both in therapeutic and regular dog training.

Little Steps hopes to raise NIS 400,000 for the project. Among other things, it sells Rosh Hashana cards featuring art by Suzi Elbaz — an Israeli woman with Duchenne who paints with her mouth — for NIS 10 each.

A misdiagnosis of Duchenne

Little Steps (known in Hebrew as “Tza’adim Ktanim”) was founded in 2010 by Kaplan, Goldschmiedt and other parents of children who had muscular dystrophy. Kaplan’s husband, Amit, came up with the name.

“We didn’t want ‘Israel’ to be in our name because we help everyone, including Arabs and ultra-Orthodox Jews, and we didn’t want to get involved in the Palestine-Israel conflict,” she said. In fact, Little Steps has quietly translated scientific papers from Hebrew to Arabic for the U.K.-based TreatNMD website to benefit patients in Egypt, Lebanon and elsewhere throughout the Middle East.

The Kaplans live in Kfar Saba, just north of Tel Aviv. Their youngest son, 9-year-old Ido, was mistakenly diagnosed with Duchenne at the age of 1 after suffering from diarrhea for about two months. A series of blood tests had revealed abnormal liver parameters and a creatine kinase (CK) level of 3,000 (anything above 200 is considered high).

Over the next several months, Ido’s CK shot up to 6,000, then 9,000, at which point the boy had to be hospitalized. Eventually it reached 12,000, and even though Ido recovered from the diarrhea, doctors at Schneider Children’s Hospital in Petah Tikva informed Kaplan and her husband, Amit, that their son had DMD.

“The diarrhea was gone, but we left with Duchenne,” said Kaplan, adding that the bad news came Dec. 14, 2009 — the first night of Chanukah. 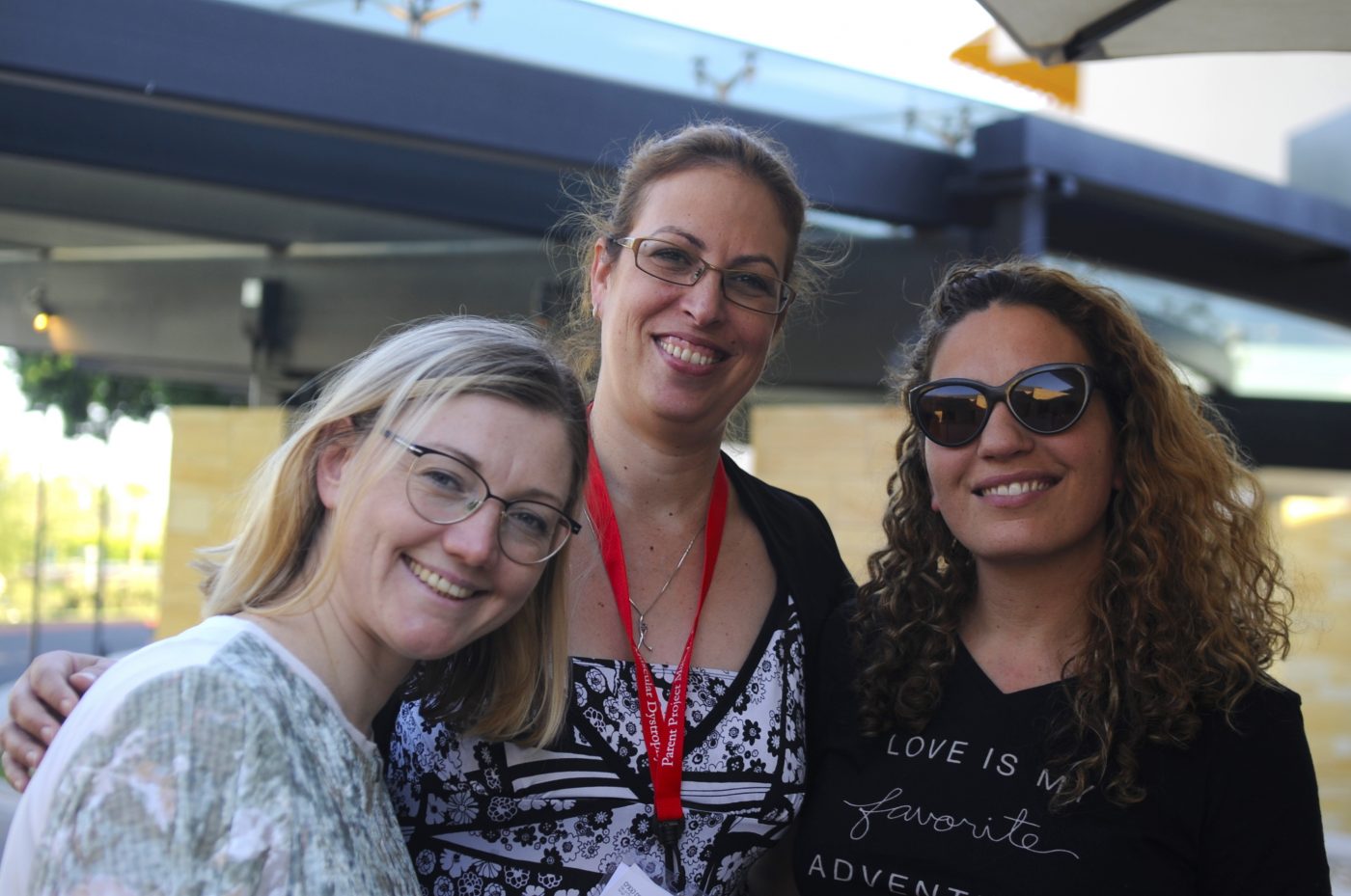 Kaplan began reading as much as she could online about Duchenne, but it wasn’t until she attended her first PPMD meeting that she was able to confirm that Ido’s deletion of exons 45 through 49 meant he actually had Becker, a milder form of muscular dystrophy than Duchenne.

“Ido looks normal. He can walk, but he gets tired and can’t do normal class sports,” she said, adding that one day he can be full of energy, and the next he gets tired very quickly.

“He’s not like a Duchenne kid at this age,” Kaplan said. Even so, “there’s a big gap between Ido and other kids in his class. He gets upset easily because of the things he can’t do. This makes him very angry.”

Kaplan said that before the establishment of Little Steps, “the only thing we found online about the disease in Hebrew was one reference saying Duchenne occurs in about one of every 3,500 male births. We eventually held a meeting with Pat and asked if we could translate PPMD’s materials into Hebrew. Much of our work is thanks to her.”

At present, the charity benefits more than 200 families, though Kaplan estimates that Israel is home to about 300 people with either Duchenne or Becker MD.

Members include an Orthodox Jewish woman whose three brothers had all died from DMD and who didn’t know she was also a carrier, as well as a Bedouin Arab mother of four Duchenne boys.

Newborn screening for Duchenne is of limited value, Kaplan said, because while two-thirds of cases are genetic, the remaining third is spontaneous — as was the case with her own son.

“The MLPA [multiplex ligation-dependent probe amplification] test checks for deletions and duplications. But half the mutations are nonsense mutations, as with cystic fibrosis,” she said. “In order to get this test, you have to do gene sequencing. They can do the MLPA for women who want children, but there’s still a 50-50 chance you could have a kid with Duchenne, even though you tested negative. For this reason, it’s not something we’re fighting for.”

Little Steps recently published a guidebook in Hebrew for patients and caregivers on how to navigate Israel’s healthcare system. The book includes various government forms as well as information on patient rights and even how to volunteer for national service in lieu of enlisting in the Israel Defense Forces (one young man with Becker recently joined Unit 8200, the IDF’s elite cyber intelligence unit).

The organization employs three people full-time, including research coordinator Mila Gumanovsky. About three years ago, it established a national registry — similar to the one PPMD operates — that contains a database of all known Duchenne and Becker patients in Israel.

“Based on this, we can apply to companies and ask them to open research sites in Israel,” she said, adding that 20 percent of Israel’s Duchenne patients are now getting new therapies such as Translarna (ataluren), developed by PTC Therapeutics. “Some of them are participating in research, and some get the drugs through compassionate use. We are working to extend this number and bring more research to Israel.”

Meanwhile, Goldschmiedt’s son, Adi, is the first Duchenne boy in Israel to receive Sarepta Therapeutics’ Exondys 51 (eteplirsen), following three denials by Israel’s Kupat Holim and a protracted legal battle. Based on his weight, the therapy would have cost nearly $1.2 million a year if the family had to pay for it out-of-pocket.

Earlier this month, Switzerland’s Santhera Pharmaceuticals announced it would enroll about 10 patients in Israel for a multinational Phase 3 clinical trial of idebenone.

Known as SIDEROS, the trial (NCT03603288) — which will involve up to 266 participants in multiple countries — aims to determine whether the experimental therapy improves respiratory function in Duchenne boys with declining forced vital capacity (FVC), a measure of lung function. It is recruiting participants. 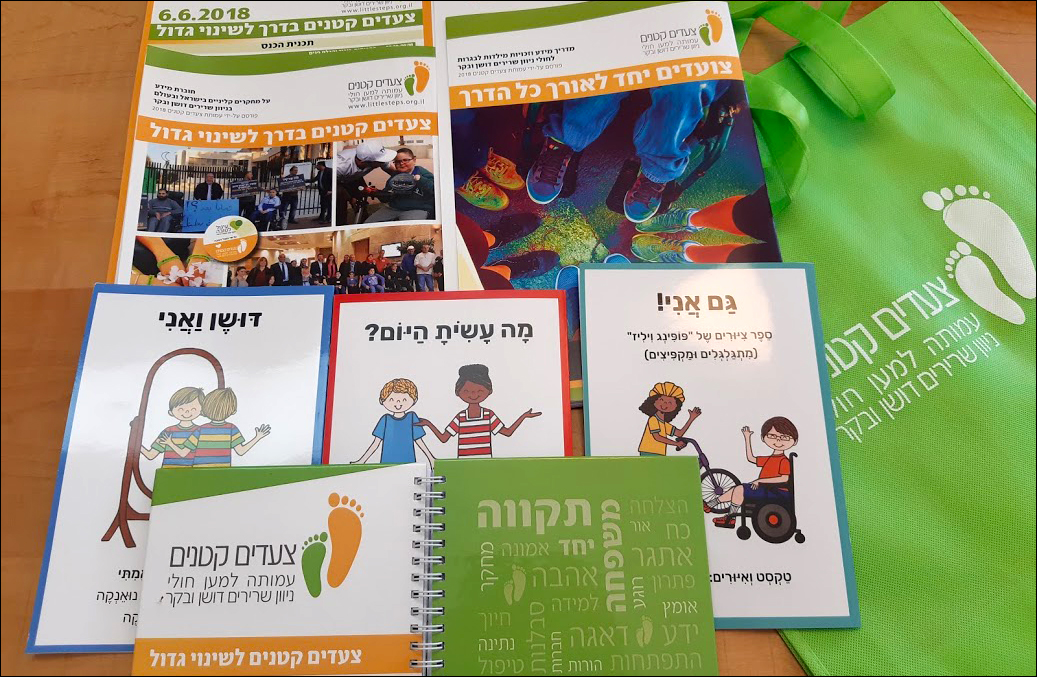 “It’s the first time that Israel will have trials for Duchenne patients above the age of 10,” said Kaplan, adding that ambulatory status won’t be a factor in recruiting patients for this trial.

“This is why children who cannot walk can take part,” she said. “The criteria for the trial depends specifically on FVC, which should be 30 to 80 percent. Anything about 30 percent means they can breathe by themselves without assistance.”

Little Steps operates on a budget of NIS 2.5 million. One-third of that goes to fund research, with most of the rest to improving treatment for Duchenne and Becker patients.

“We realized the best way to care for these kids is to have multidisciplinary clinics, because there are so many aspects to this disease,” she said. “Before, families would go to a neurologist, or a cardiologist, but these doctors weren’t speaking with each other. Finally, in 2013, the first muscular dystrophy clinic was established at Hadassah Hospital in Jerusalem, thanks to our efforts.”

Schneider Children’s Hospital has since become Israel’s largest center for treating Duchenne; the organization is now working to find a hospital that will dedicate a similar multidisciplinary clinic for adult Duchenne and Becker patients.

Every two years, Little Steps sponsors a conference for Duchenne and Becker families throughout Israel. This year’s meeting took place June 6 in Herzliyya.

“It was the first time we invited companies to Israel to speak directly to the families,” she said. “Until now, only Israeli physicians and experts came to the conference.”