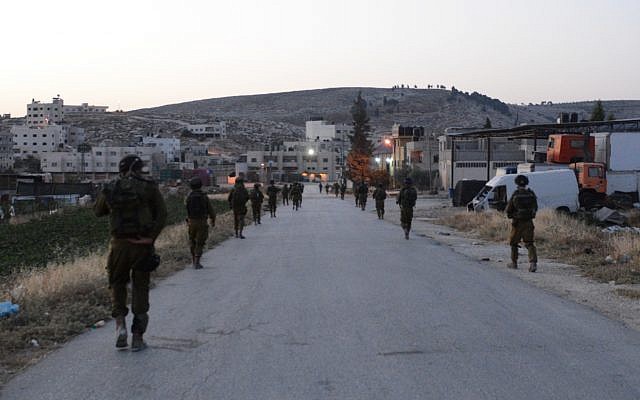 IDF soldiers searching for three teens (Eyal Yifrach, Gilad Shaar, and Naftali Frenkel) kidnapped by Palestinian terrorists in the West Bank in June 2014. The teens were later found dead. Photo credit to the IDF who made the picture available for free distribution under the Creative Commons Attribution 2.0 Generic license.

Commanders for Israel’s Security (CIS) is a non-partisan movement that includes “the overwhelming majority of available retired IDF generals and their Mossad, Shin Bet (Security Agency), and Police equivalents”. In 2016, they delivered a plan to Israel’s government ministers, deputy ministers, and MKs (members of the Knesset).

The following are governing principles of the plan:

This indicates that Israel’s most experienced security experts recognize that Israel’s presence in the West Bank and even in the Palestinian neighborhoods of eastern Jerusalem is a military occupation, and that it can only be temporary.

The plan’s goals are:

They urge the Israeli government to declare: 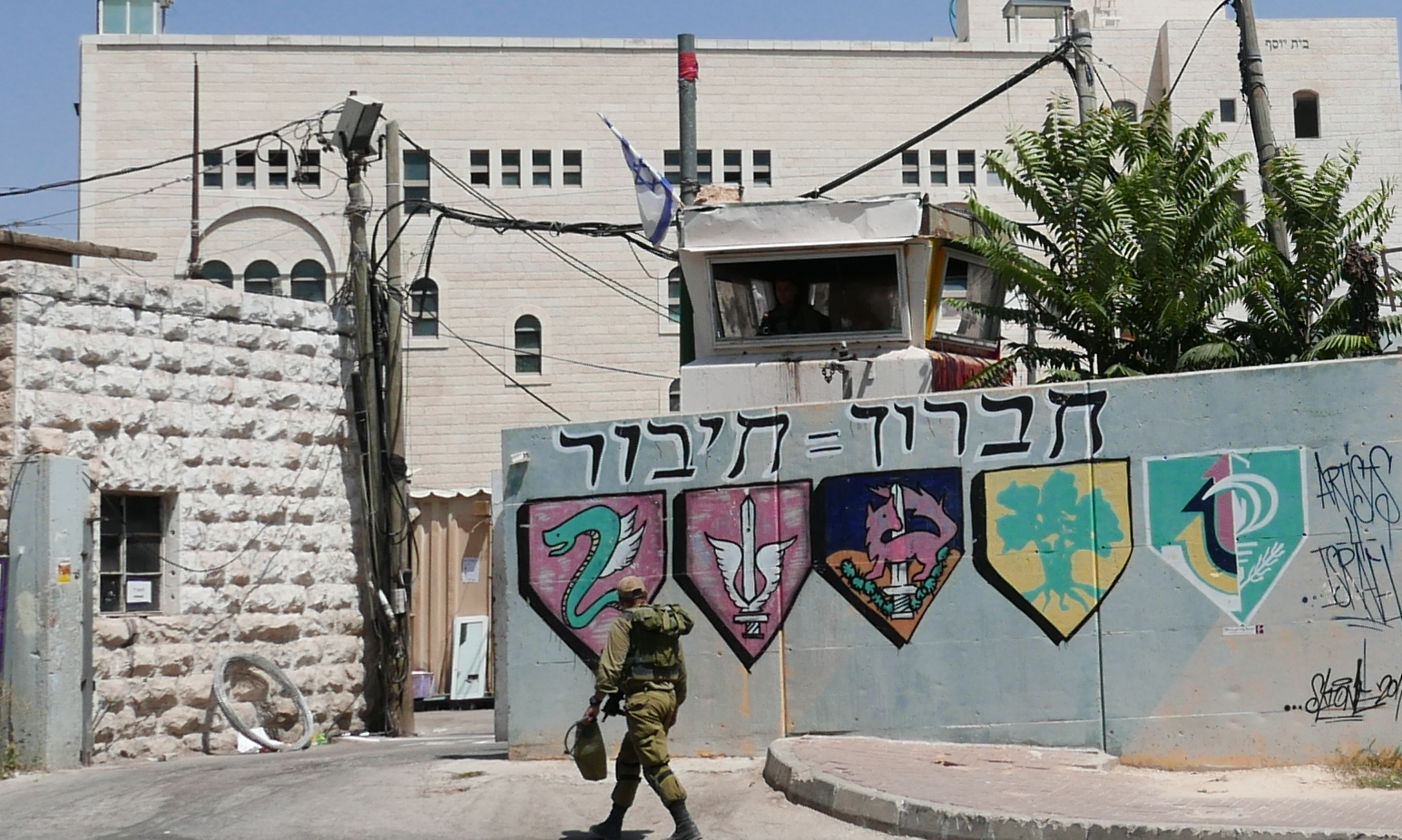 IDF outpost in Hebron in Area C in September 2015. Hebron is divided in two parts: 80% that is in Area A and 20% that is in Area C. Photo credit to Jacob Torrey (USA) who made the picture available for free distribution under the Creative Commons Attribution 2.0 Generic license.

The authors of the plan recognize that, “Terror cannot be stamped out by force alone. It is also a gross simplification that incitement is the sole cause of terror. Terrorism draws on a variety of social, nationalist and religious sources, and is amplified by a sense of despair. […] The current wave of violence is, in large measure, the product of Israel’s rule over more than two million Palestinians and their resulting humiliation, abject poverty, despair and the absence of hope for a better future. As these feelings intensify, they are exploited by extremists who fan the flames with incitement, encouraging further violence.”

In other words, Israel’s most experienced security experts recognize that the occupation is not tenable in the long term from a security point of view.

They recognize that, “The State of Israel must adopt a clear policy, based on actual conditions on the ground, a long term perspective and the need to eliminate ambiguity regarding the future of those parts of the West Bank which it currently controls. Israel must decide whether it seeks to annex the territories or continue to hold on to them until a permanent status agreement that guarantees its security can be reached.”

In other words, these experts recognize that Israel’s ambiguous policy in the West Bank cannot continue indefinitely.

They state that, “In contrast with the unilateral withdrawals Israel carried out in 2000 (from South Lebanon) and 2005 (from Gaza), the ‘Security First’ Plan calls for the IDF to remain in the West Bank and retain complete security control until a permanent status agreement with the Palestinians ushers in alternative concrete, sustainable security arrangements.”

The Center for a New American Security (CNAS) is an independent, non-partisan organization that develops national security and defense policies. In 2016, they delivered a plan developed by four security experts, including Israeli Major General Gadi Shamni who served in the IDF for 36 years, including as Commander of the Hebron Regional Brigade, Commander of the Gaza Division, and Commander for Central Command.

The plan states that, “The purpose of this study is to demonstrate that wellthought-through security measures in the context of the two-state solution can provide Israelis and Palestinians with a degree of security equal or greater to that provided today by Israel’s deployment into the West Bank, and that such measures can be consistent with Palestinian needs for sovereignty and dignity. In the context of a two-state agreement, Israel would still have the right and ability to defend itself by itself as any sovereign state does. But the intent of this proposed security architecture is to build in a multilayered system so that the need for unilateral Israeli action is vastly reduced to rare emergency situations.”

The authors assert that, “Israel should respond in some way to the Arab Peace Initiative (API), thus beginning to set the table for a broader regional security framework.”

The plan recognizes that, “After decades of living under occupation, Palestinians care deeply about dignity and sovereignty. They will not accept any solution that includes a visible Israeli force or one that continues to limit Palestinian mobility or conducts functions that they believe should be conducted by the sovereign state of Palestine. […] While Israelis do not trust Palestinian political will, Palestinians believe that Israelis will overstep at every opportunity. Palestinians believe that Israelis use security as an excuse for occupation, use too much force when conducting operations, and err on the side of arresting or harming people far more than is necessary”.

One particular comment in the plan highlights the negative effect of the occupation, even in area A which is supposed to be controlled by the PA (Palestinian Authority). It says, “The PASF (PA Security Force) especially chafes when the IDF conducts unilateral operations in Area A of the West Bank, which is supposed to be under Palestinian Authority civil and security control. In those instances, the IDF forces the PASF to leave the area and enters with overwhelming force (because of force protection requirements), thus alienating the local population. This is particularly humiliating for the PASF, which is branded as a collaborator of the occupation because it is publicly shown to not be able to protect its own population from outside incursion”.

The CNAS plan is far more detailed and often more blunt than the CIS plan (for example, it uses the word “occupation” 13 times whereas the CNAS plan uses it only once), but the two plans are highly consistent with each other.

Blue White Future (unrelated to the Blue and White political alliance), a non-partisan Israeli political movement founded by Admiral Ami Ayalon, former Director of the Israel Security Agency, Colonel Gilead Sher, a former senior peace negotiator, and Orni Petruschka, an entrepreneur and former IAF fighter pilot, proposed a plan in 2012 for “Promoting Two States for Two People via Constructive Unilateralism with International Support”. They note that, “the status quo remains untenable.  The situation has worsened in the course of the last fifteen years and the conflict appears more intractable than ever.  There is ideological hardening on both sides.  Time is running out for those who seek a secure, Jewish and democratic Israel within recognized boundaries alongside a demilitarized, independent Palestinian state”. They propose, “Gradually creating a reality of two states by performing a series of gradual constructive unilateral steps”.

Amos Yadlin, a former general in the Israeli Air Force and former head of the IDF Military Intelligence Directorate, presented a plan in 2018 prepared by the Institute for National Security Studies, Israel’s leading strategic think tank, following two years of research and consultation with figures throughout the Middle East. The plan urges that Israel “take independent action to remain ‘Jewish, democratic, secure and ethical’ and prevent ‘existential threat’ of binational state”. Yadlin said, “We can’t wait for a Palestinian messiah to come and make peace with us, because that won’t happen. And we can’t wait for the messiah who will give us a clear Jewish majority from the Jordan River to the Mediterranean Sea”.

Charles Freilich, a former Israeli deputy national security adviser and a senior fellow at Harvard’s Belfer Center, specializing in Israeli national security strategy, US-Middle East policy, and Middle Eastern affairs, proposed in 2018 an approach of gradual disengagement from the West Bank. He argued that “Israel [has] in effect annexed it [the West Bank] and brought terrorism closer to Israel. That’s what a one-state solution looks like. […] That’s what happens when you mingle two sides who hate each other together. We have to bring Jewish Israelis back into Israel so that they aren’t walking around with threats around them. […] If we want to remain a Jewish and democratic state we need to separate from them.”

All these plans come from highly credible sources, and all these sources are concerned above all with the security of Israel’s citizens and with preserving’s Israel’s character as a Jewish state. All of them understand the inability of the PA to negotiate and deliver a peace deal. The plans have much in common because they are all based on hard facts and military knowledge of the situation on the ground, and not on naïve lofty ideals. None of them bears any similarity to the speedy and unplanned Gaza withdrawal which is often cited as an excuse for continuing the occupation.

Yet, the current government of Israel has not adopted any of these plans and has not developed its own variation either. It has made the deliberate political choice to cater to the Israeli extremist minority that believes that the West Bank is Jewish land and that the Palestinians have absolutely no right to any of it.

It has made the deliberate political choice to continue towards a situation that would force Israel to choose either endless occupation or annexation of the West Bank, knowing that annexation would require either seeing Israel become a binational state or instituting a system of apartheid where Palestinians have permanent residency but no citizenship.

The Commanders for Israel’s Security see the status quo as undermining Israel’s “international standing”. Israel’s image has long relied on the claim that it wants peace but cannot make peace because it has no peace partner.

That claim was true in 1947 when the Jews accepted the UN partition plan while the Arabs rejected it. It was true in 1967 when Israel, after winning a stunning military victory, indicated that it was willing to discuss peace, and the Arabs responded with “Three No’s”: no peace with Israel, no recognition of Israel, no negotiations with it. It was true in 2000 when Ehud Barak offered the Palestinians a state in Gaza, the West Bank, and East Jerusalem, and Yasser Arafat turned it down. It was true in 2008 when Ehud Olmert offered a similar deal to Mahmood Abbas who again turned it down. But that claim is no longer credible in 2019.

The Commanders for Israel’s Security believe that, “Israel is strong enough that it can – and must – launch an independent initiative aimed at changing the situation dramatically and improving its standing in the regional and international arenas”, but the Israeli government deliberately chooses to not provide such leadership.