Beep. Beep. Beep. The early 1990’s fax machine lit up like an alien spaceship preparing to launch, slowly printing a blurred piece of shiny paper that would change Eli Ben Zaken’s life forever. Eli had immigrated to Israel with his wife some twenty years before and spent his days working odd jobs, until he finally opened an Italian restaurant with some old friends in Jerusalem named “Mamma Mia”. With a bit of prior experience in agriculture and culinary inspiration from the restaurant, Eli decided to plant a small vineyard just outside his newly acquired home in Moshav Ramat Raziel. Although he didn’t realize it as the wet earth began to cover his digging hands, Eli’s vineyard would unintentionally become the very first to be planted on the rocky Judean Hills since ancient times.

Eli had no formal training in winemaking and certainly didn’t have lofty goals when he started out. “I didn’t like wine as a youngster,” Eli admitted, “only once I was working at the restaurant did it pique my interest. Back then, there was almost no such thing as a boutique winery in Israel, so we only thought to make enough wine to share with our friends and family.”

After a long day of working at his budding eatery, Eli would come home to tend to his young plants, pruning, and trellising the freshly planted vines to perfection. Finally, after four years of watching his backyard transform into a blossoming vineyard, Eli printed his artistically designed labels to stick on the mere 600 bottles of what he called,”Domaine du Castel”. “There was no dream or plan,” Eli assured me, “it was purely for enjoyment.” Uncorking his bottles at family meals or giving them as gifts to hosts of dinner parties, Eli was feeling quite satisfied with his new pastime – or so he thought.

Eli retells the story of the fateful day the fax arrived as if it were yesterday. “I was driving on the highway when my old carphone began to ring. It was my wife. She told me that we had received a fax from England.” One of Eli’s friends had brought a bottle of his Domaine du Castel to a well-respected master of wine named Serena Sutcliffe, who had no idea that this was Eli’s first shot at winemaking. Serena was so impressed with Eli’s wine that she decided to share it with her husband, David, also an acclaimed winemaster. Dazzled by the fruits of Eli’s labor, Serena sent a fax thanking their mutual friend for sharing it and praising Eli for his “brilliantly made wine”. 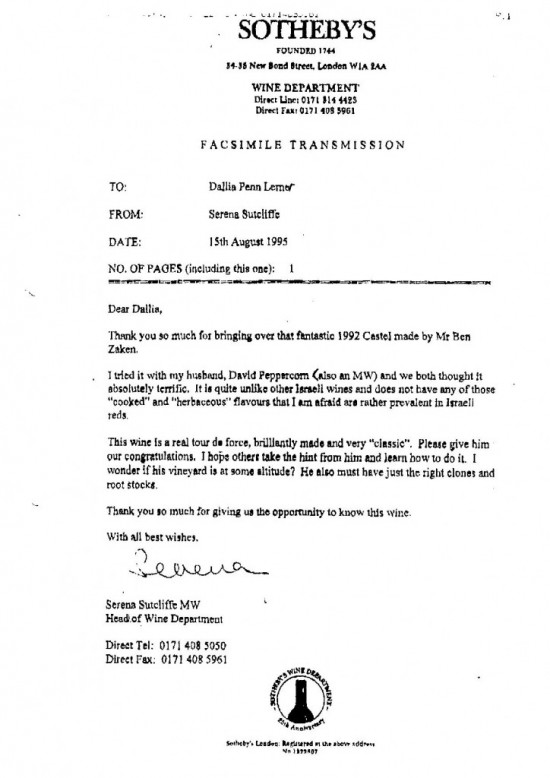 Knowing that a compliment of that magnitude by a critic of Serena’s stature could transform his simple hobby wine into a sought after national treasure, Eli’s heart began beating wildly, tears rolling down his face, as his wife read the letter to him over the phone. “I told my wife to hold on while a pulled over, and I made her read it to me again. I couldn’t continue driving with tears in my eyes,” Eli recalled, “I’m not a religious man, but at that moment I felt as if someone took me by the hand and led me to where I needed to go.”

Reaching over to the end of the table, Eli handed me the now framed fax he received twenty years ago. “I kept it folded in my pocket for weeks,” Eli remembered emotionally, “I showed it to everyone I saw.” After recovering from the initial shock of the letter, Eli recognized that he could not ignore this stellar review. “At that point we needed to decide what we were going to do,” Eli recalled. With his hopes in his pocket, Eli soon realized that making eight barrels was not much more difficult than two. He transformed a decrepit neighboring chicken barn into a functional winery and sent his son, Ariel, to study winemaking in Burgundy. Within five years, Eli was already producing close to 100,000 bottles bearing the very same label that he had designed for his first vintage. “And the rest is history,” Eli laughed, “we’ve tried not to disappoint.”

With tens of elite wineries now sourcing their grapes from the over 700 acres of vineyards planted on the slopes of Jerusalem since Eli first put his shovel in the ground, he truly is the forefather of the Judean Hills wine region. Over the years, Domaine du Castel has become one of Israel’s most renowned and respected wineries worldwide, claiming some of the highest scores from both local critics and those across the globe.

You would think that, at the noble age of 70, after achieving that level of success almost by accident, Eli would be satisfied and finally kick back and relax-but that just isn’t his style. Domaine du Castel is now putting the finishing touches on a new, state of the art winery, with the most cutting edge technology the wine industry in Israel has ever seen. When Eli showed me his exquisite barrel room, he explained that, despite all of the new machinery, they will continue to do things the “old fashioned way”, stacking their barrels on wedges without the use a fork lift, leveling them with a white construction string. With his twinkling eyes peering out into the future and milestones of the past framed on his walls, Eli was, and continues to be, one of the most revolutionary figures in Israeli wine history. 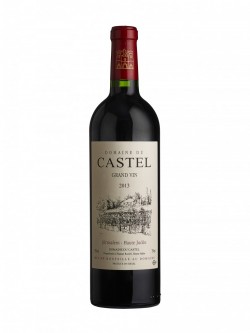 “This is my first time tasting this wine since it’s been bottled,” Eli told me excitedly. Holding the original 1992 Grand Vin beside his freshly released 2013 vintage, the bottles look nearly identical. As Eli filled my glass, I couldn’t help but imagine him twenty years earlier, wearing the same white straw hat, having no idea what the future would hold. The elegance of Eli’s classically blended wines has continued unwavering since his very first vintage, and this fine assortment of cabernet, merlot, petit verdot, malbec, and cabernet franc is no different.

Full bodied, with one leg in an endless fruit orchard and the other in an exquisite spice shop, holding on with a bar of dark chocolate, it is a real pleasure to the mouth. Although this wine will continue to get better and better with time, it is unbelievably enjoyable even at its release. If you are new to wine, this might be the perfect bottle to use as a landmark of what you might hope other Israeli Bordeaux style blends should taste like. Play either Leonard Cohen’s “Songs of Love and Hate” or Jim Hall and Ron Carter’s “Alone Together” lightly in the background as you enjoy this delightful wine. Be sure to make a visit to Domaine du Castel’s new winery when it opens up – it’s bound to be quite an exciting trip.