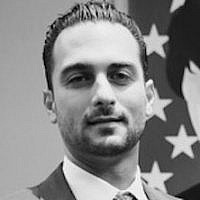 The Blogs
David Peyman
Apply for a Blog
Advertisement
Please note that the posts on The Blogs are contributed by third parties. The opinions, facts and any media content in them are presented solely by the authors, and neither The Times of Israel nor its partners assume any responsibility for them. Please contact us in case of abuse. In case of abuse,
Report this post. 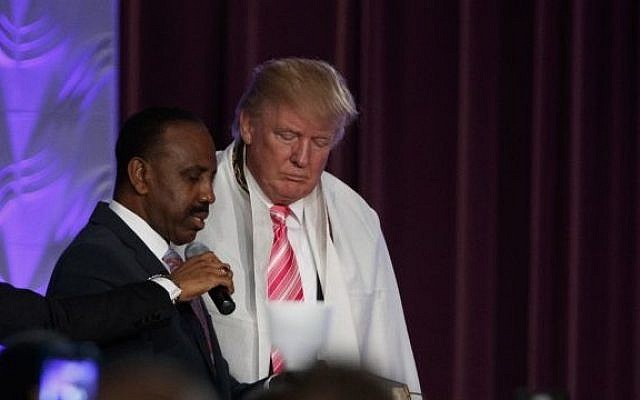 Donald Trump wears a tallit, or Jewish prayer shawl, as he's presented with a gift during a church service at Great Faith Ministries, Saturday, Sept. 3, 2016, in Detroit (Evan Vucci/AP)

On policy, there is no question that Donald Trump is the most pro-Israel, pro-Jewish candidate to ever run for the U.S. presidency. And this year’s Republican Party platform is the most pro-Israel political platform in the history of the United States, on either side of the political aisle. That is why when Jewish and pro-Israel voters learn about Donald Trump’s policies, they support Donald Trump. Let’s examine the evidence and look at other ties that bond Mr. Trump to Israel and the Jewish people.

There’s been a 100% rise in anti-Semitic incidents on college campuses between 2014 and 2015 (2016 figures yet to come). As a former federal prosecutor, I am proud that Mr. Trump will direct the Department of Justice Civil Rights Division to investigate and prosecute coordinated intimidation of pro-Israel students by university student groups, faculty and administrators.

As a product of a public school system, I am proud of Mr. Trump’s commitment to strengthen our public school and decrease classroom size. As a Jew, I am equally proud that Mr. Trump will immediately add an additional federal investment of $20 billion towards school choice by reprioritizing existing federal dollars.

No one accepts that our government should have deported black Americans from their homes as a solution to keep the peace during racial violence in the American South. Yet, for Jews living in what may be a future Palestinian state, our government has yet to rule out expelling Jews from their homes. Jews have had a presence in Judea and Samaria (known as the West Bank) for thousands of years, despite massacres and forced deportation of Jews, including the Hebron Massacre of 1929, the Arab Revolts of 1936 to 1939 and laws punishing land sales to Jews with the death penalty that continue today.

Mr. Trump’s administration will not accept a Judenrein Palestinian state, if and when a true and lasting peace between the Israelis and Palestinians is finally achieved. Just as Israel will not deport the over 1 million Arabs living in Israel today, religious cleansing of Jews cannot and will not be tolerated by a Trump Administration in any future Palestinian state.

The Palestinian Authority raises children to hate Jews and the State of Israel. They do so in textbooks, television programs and newspapers. They pay the families of suicide bombers blood money and name streets and squares after them. Mr. Trump’s policy is clear: there can be no lasting and just peace when Palestinians speak peace in English, and wage war in Arabic.

Protecting Israel at the UN

The same brutal dictatorships that voted for the anti-Semitic and anti-historical UNESCO resolution that denies Judaism’s connection to its holiest site, the Temple Mount, also sit on the UN Human Rights Council. Under a Trump Administration, the U.S. will cut off funds for the UN Human Rights Council, a body solely devoted to slandering the world’s only Jewish State.

Mr. Trump will also protect Israel from unfair Security Council resolutions that attack Israel. But, he will not use the American veto as a hammer over the head of Israel to extract concessions from Israel on other issues. There will be no quid pro quo on protecting Israel at the UN.

Jewish ties to Jerusalem date back over 3000 years. Both archeological evidence and the Bible clearly establish Jerusalem as Judaism’s holiest and most revered point on earth. Jerusalem was, is and will be the indivisible capital of the Jewish people and the U.S. embassy will be moved to Jerusalem under a Trump Administration.

Many U.S. presidential candidates have made the same declaration. What makes Mr. Trump any different? Mr. Trump is under no illusion of the severe push back from Arabists and lifelong bureaucrats at the State Department who will tell Mr. Trump it is impossible to make the move. On that day, as David Friedman, Mr. Trump’s senior Israel policy advisor, said recently in Jerusalem, Mr. Trump will look at the State Department bureaucrats and say: You are fired!

Mr. Trump’s ties to Jews and Israel go beyond policy. They also go beyond his loving support and encouragement of his religiously observant Jewish daughter and son-in-law and his pride in his Jewish grandchildren. Donald Trump’s love of the Jewish people dates back many decades. Senior observant Jewish executives in the Trump Organization recall being encouraged to stop deals on Friday afternoons so they can go home to their families to observe the Sabbath.

Mr. Trump has disavowed any support from anti-Semites, just as I hope Mrs. Clinton disavows support from anti-Israel groups that support her. I proudly wear my kippa to Trump Tower and receive support and encouragement from the campaign to take off every Sabbath and every Jewish holiday (of which there have been many in October), crucial days lost for any campaign. But supporting Jews is what Mr. Trump has done all his life.

These are some reasons why American Jews chose Donald Trump as Grand Marshall of the annual Israel Day Parade in New York. Mr. Trump’s policies, his staunch pro-Israel advisors and his personal ties to the Jewish people are why they will choose him as the next President of the United States.

David Peyman is senior advisor and National Director of Jewish Affairs and Outreach for the Trump-Pence Campaign .

About the Author
David Peyman is senior advisor and National Director of Jewish Affairs and Outreach for the Trump-Pence Campaign .
Related Topics
Related Posts
Comments