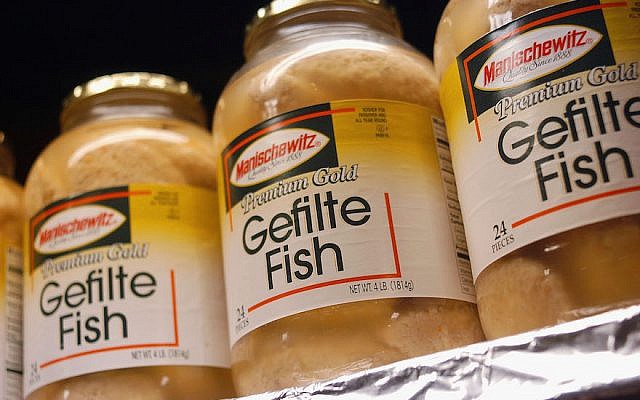 YARDLEY, PA - APRIL 2: Jars of Gefilte Fish sit on the shelves awaiting purchase from consumers at McCaffrey's Passover Store April 2, 2004 in Yardley, Pennsylvania. The family owned McCaffrey's Supermarket was recently destroyed by fire, and to service their Jewish customers for Passover, the family created a Passover store at a local farmers market. (Photo by William Thomas Cain/Getty Images) 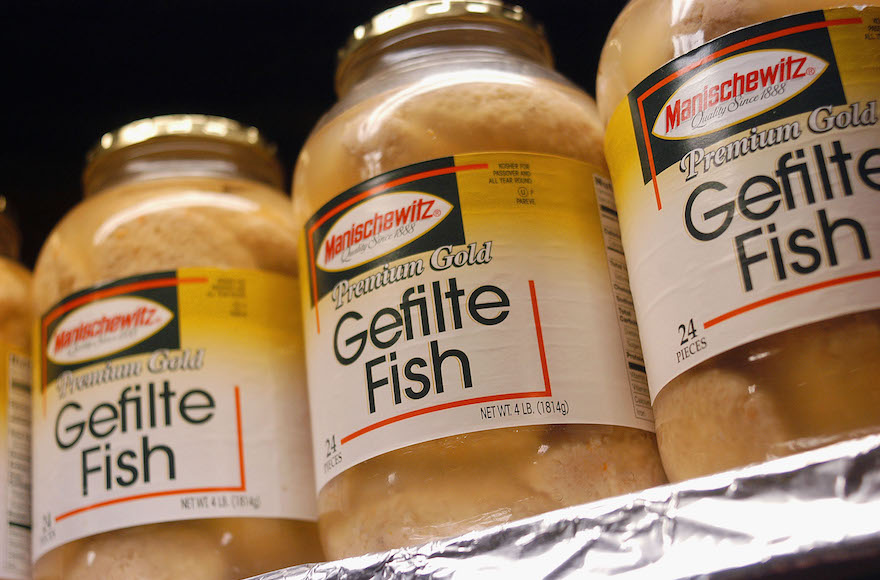 JTA — Every year at Passover, many Jews enjoy inviting non-Jewish guests to the seder, the big family meal during which they recount the tale of the Exodus. Such invitations are extended in a spirit of interfaith cooperation and the conviction that at least one person at the table should actually enjoy himself.

For non-Jews who might be intimidated by attending their first seder, we offer the following tips on seder customs and ways to avoid what Yiddish-speakers call a “tsimmes.”

Tip #1: Avoid the tsimmes. The word is Yiddish slang for a fracas, but also the name of a casserole made of sweet potato, carrots, dried fruit, honey and brown sugar. It has been known to induce diabetes between the soup course and the drive home.

Try to get a seat at the main table and not at the card table surrounded by folding chairs. This is known as the “Children’s Table,” or if the children are all grown, the “Cynical Cousins’ Table.”

The heart of the seder is the communal reading of the Haggadah, which tells the story of the Jews’ liberation from Egypt in the same way that your hairdresser tells you about her weekend at Cabo: She’ll eventually get to the point, but not without a few digressions.

You may be asked to read a passage from the Haggadah. Do not feel intimidated; there is no way you’ll do this any worse than the people sitting at the Cynical Cousins’ Table.

You’ll notice that the centerpiece of the seder table is a plate containing the following foods: a charred piece of meat, a blackened hard-boiled egg, a wilted lettuce leaf and a glob of what looks like industrial spackle. Do not eat any of these delicacies, no matter how tempting they appear.

Passover tells a specifically Jewish story, but its messages of renewal and liberation are universal. There is no reason for you as a gentile to feel judged or looked-down upon. Unless you are Egyptian, then hoo-boy.

One of the evening’s highlights is the singing of “The Four Questions.” In this ancient recitation, the youngest guest inquires about the unusual customs performed only during the seder: for example, eating matzah, dipping our food and reclining on pillows. You’ll notice that no one ever answers the questions. Welcome to my childhood.

About that matzah: To commemorate the haste in which they left Egypt, Jews only eat crackers made from wheat that in its journey from field to supermarket has not been allowed to rise or acquire any discernible flavor. When “tasting” your first piece, remember to nod and smile and keep a full glass of water or other liquid nearby.

Do NOT compare matzah to a communion wafer, unless you actually enjoy long awkward silences.

During the seder, guests are each required to drink four cups of wine. This sounds like more fun than it is: The cups are parceled out over about eight hours and typically contain kosher wine.

Yes, there are good kosher wines. But at $40 a bottle, they are kept for special occasions.

Another highlight of the seder is the singing of “Dayenu,” a Hebrew word meaning, roughly, “We would have been satisfied” — leading many scholars to suspect it couldn’t have been written by a Jew.

After plowing through the Haggadah and eating various combinations of symbolic foods, it is now time for the festive meal. Congratulations! You made it! You’re almost there! (Unless, of course, you are at an observant home, where the reading of the Haggadah will pick up again right after dessert. No, I’m not kidding.)

The festive meal will often begin with a serving of something called “gefilte fish.” This is sometimes referred to as “carp pâté,” but only by people who have never seen or tasted pâté. When “tasting” your first piece, remember to nod and smile and keep a full glass of water or other liquid nearby.

In addition to gefilte fish, you can expect to encounter other unfamiliar foods at the table: charoset, cholent, chamin, keshk, machmar, gribenes, holishkes, bimuelos, kneidlach, mandelbrot, teiglach and halek. Most of these taste a lot better than they sound. Except gefilte fish. Gefilte fish tastes exactly the way it sounds.

After dessert, the children will either hide or find a piece of matzah known as the “afikomen” and then engage in an aggressive bargaining session with their parents over its return. One pink-faced uncle may joke, “No wonder we’re so good at business!” DO NOT LAUGH AT THIS JOKE.

As the seder moves toward its conclusion, someone will open the front door and invite the prophet Elijah to join the seder. Considering Elijah has been dead for 3,000 years and there are millions of Jewish households making the same request, you might find yourself thinking this is implausible. And I might find myself thinking, “Really? More implausible than Santa Claus or the Easter Bunny, wiseguy? Do you think you’re better than us?” Of course, I will have had at least three cups of wine at this point.

The Elijah ceremony also includes the recitation of a rather angry prayer that begins, “Pour out Your wrath upon the nations that do not recognize You.” It sounds pretty bad, but first you must consider what the late Jewish historian Salo Baron once said about the impact of persecution on the collective Jewish self-consciousness and — wait. I can’t do this. It’s pretty bad.

Can I get you another cup of wine?

At this late point, many Jewish families like to joyously sing a song called “Chad Gadya,” which is about a dead goat, a beaten dog, an injured cat, a slaughtered ox and a visit by the Angel of Death. It is a children’s song. One pink-faced uncle may joke, “No wonder we’re so screwed up!” DO NOT LAUGH AT THIS JOKE.

The seder now concludes with everyone saying “Next year in Jerusalem!” to which your hostess may respond, “Next year at somebody else’s house!” You may now get up from the table and — hey, come back! You forgot your coat!