If you’ve been reading my column for a while, you know that I have four wonderful daughters. And one of the things that makes them so wonderful is that they’re terrific sisters. Of course, they sometimes get into sisterly spats or frictions arise, and when that happens it can get loud. But those are the exceptions. Most often they truly like each other (even more important and difficult than love, which they also do), enjoy spending time together, and are helpful and supportive.

Which brings me to sister trips. Two of them, because of geographical proximity and similar schedules, often vacation together. But every once in a while there are four-sister trips. Indeed, I’m sure all of Iceland is still talking about the four Kaplan women and their experience in getting stuck in, and thankfully getting unstuck from, a snow field. (But then again, there aren’t too many people in Iceland, so they don’t really have that much to talk about).

Recently, they went to the Everglades together. Don’t worry; this isn’t going to be a travelogue (though there’s one hilarious story which I’ll be happy to tell anyone live — magic word is chicken). Rather, it’s about attitudes and perspectives that struck me during their vacation planning.

One of the things that makes them good trip companions is that they split up the prep work. Each has developed certain specialties, whether it’s researching where to go and planning itineraries, finding the best auto rental or Airbnb, making airline or hotel reservations, and the like. A few weeks ago, I overheard the one in charge of activity reservations trying to book a trip to a new national park, where limited access butted heads against too many people. She was sadly unsuccessful, and told me that it was unfortunate because one of her sisters sought to see every national park, and probably would have to return just to see this one.

A bit later, I heard her side of a conversation with a company offering kayaking tours in the Everglades. It went something like this: “Yes, we have some kayaking experience…. No, not a lot…. We usually have a guide with us…. Crocodiles? … Pulling people from crocodile-infested waters?… Well, if you’ve been trying to frighten me, you’ve succeeded.” When she got off the phone, she turned to me and said, “Well, that’s a hard no.” And I responded: “Good. It’s always been a goal of mine not to be eaten by crocodiles while on vacation.”

As I thought about it, I realized that both went far beyond vacations. Think of the world of employment. A young person starting out in the job market after college or graduate school might take risks regarding employment, work for a start-up for little if any pay but lots of stock options or for a low-paying nonprofit out of idealism and a desire to better the world, or leave a stable but dull situation for a riskier though exciting one. A longing to shoot for the stars; to see all the national parks even if you sometimes get closed out of one. Someone in their 50s or 60s, however, where ageism, though illegal, still plays an unfortunate role, could have a very different perspective. They might feel that job opportunities are slim and fear the unwelcome prospect of having to ask “Will you have fries with that?” They’re not ready to give up stability and security in exchange for excitement or advancement. They just want to avoid being eaten by crocodiles.

And then there’s my daughter who crossed off two bucket-list items when she parachuted from a plane as a senior in college and bungee jumped from a bridge in New Zealand with her husband on their honeymoon. (Smart girl; she didn’t tell me or my wife about these activities until after they were over and could send us videos which proved they were safe and sound. Didn’t make the idea any less frightening, though.) And Sharon and I weren’t so different when we were young, once going parasailing from a beach in Acapulco with a bunch of Mexican teenagers who didn’t even have a kiosk from which to sell tickets. (We also waited to tell our parents until it was over, though we used postcards — remember those?).

Those were the days of striving to see all the national parks. On our vacations nowadays, with dangerous stomach bugs in exotic locations and a spreading coronavirus scare, we think more about avoiding snapping crocodile jaws.

Age can also work in the opposite direction. As I get older, I continue, as I did in my younger years, to push the envelope in matters regarding a more complete participation of women in Orthodox Jewish practice and learning. But unlike back then, when I still felt stirrings of the yeshiva boy I once was, I’m now less concerned about theological crocs swimming nearby. So I eagerly take courses in modern biblical criticism and sample certain Jewish religious communities outside my own. I yearn to visit and experience — though not live in — more parks.

It goes beyond the personal as well. For example, there’s a proposed regulation that would direct the use of traditional or classical architectural styles for all new federal buildings and renovations. This probably would eliminate having any new truly awful buildings like some of the brutalist ones of the 50s and 60s, though banality probably would be the result more often. We’d be safe from crocodiles but not much more.

But shouldn’t we yearn for more? There are magnificent buildings in the minds of architects waiting to be built that we’ll never experience under the proposed regulation; we’d be closed out of stunning new courthouses and embassies. Isn’t the risk of a small brutalist crocodile bite on your ankle worth the possibility of basking in the beauty of a Bryce Canyon-like building such as the glorious, though non-traditional, National Museum of African American History and Culture that graces our National Mall?

Ecclesiastes 3:1 (and Pete Seeger) teach (and sing to) us, Lechol zman, ve-et lechol chefetz tachat ha- shamesh — There’s a season for everything, a time for every purpose under heaven. The trick is getting the timing right, to know when to aspire to see all the national parks and when to settle for not being eaten by crocodiles. So, as Sergeant Phil Esterhaus said at the end of every roll call on “Hill Street Blues,” “Let’s be careful out there.” And I’ll add, as the good sergeant didn’t, but not too careful. 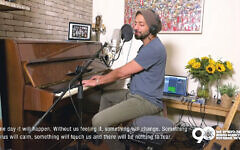 Letter from Israel: In solitary confinement together
Abigail Klein Leichman