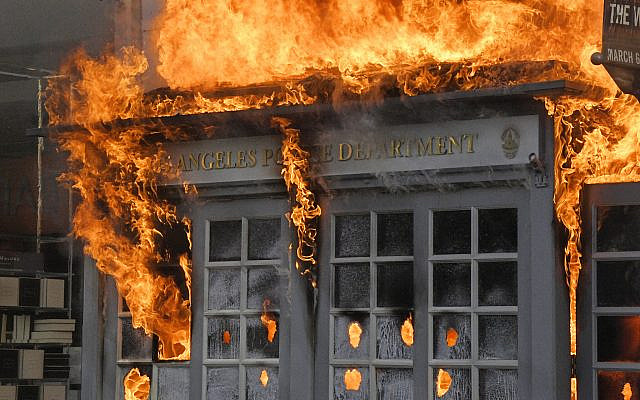 To many protesters the term "Defund The Police" Also Means To "Destroy The Police" And Law And Order.The Rioting, Looting And Destruction By Rioters Should Never Have Taken Place. Is This A Sign Of What's To Come To America?

As a young boy, I watched with horror the newsreels showing the Nazi extermination of 6 million Jews. I always wanted to know if those Jews had warning signs this would eventually happen. We now know the Nazi leader had devised a plan to eliminate the Jews that went by the name of “The Final Solution”. But that took many years of careful planning and then many more years to put into motion.

Perhaps the most shocking part is that key elements of the Nazi plan are playing out right before our very eyes or could become a reality in the near future. And the worse part of this is that it is affecting not only Jews today but the entire population. In 1933, the following laws and decrees took effect according to the British Library site-

In the riots that followed George Floyd’s killing, the top three on the list became a reality.

Book stores and the books inside were looted and set on fire. There were random attacks on everyone by the rioters. With all of this crime taking place at one time, the police did not have enough manpower to deal with the looting and crime. In some US cities sometimes the calls to 911 went unanswered.

There would be additional Nazi laws and decrees for the next 6 years until Germany invaded Poland in 1939. Kristallnacht took place on November 9 – 10, 1938.  The German authorities looked on without intervening as Jewish businesses, Shuls and schools were vandalized and set on fire.

As I mentioned in a previous Blog, the riots and fires that broke out all over America reminded me of Kristallnacht. And the protests that followed takes me back in time when I lived in Minneapolis. There also were protests and rioting, especially in the late 1960’, which were concentrated in what was known as the Minneapolis North Side.

Minneapolis Riots In The 1960’s

Prior to 1950, the Jewish population was concentrated in Minneapolis’ North Side. That is where my parents grew up and lived when they were first married. But they became aware of new housing being built in 1950 in St. Louis Park, and they moved when I was nine months old. As the months and years went by, many Jewish residents of the North Side also moved out to the suburbs leaving the North Side with a predominately Black population.

The riots were concentrated on the North Side. A few Jewish businesses which remained in the North Side were looted and partially destroyed. The Jewish owners had been in that neighborhood for many years and when the smoke finally cleared, it was quite obvious that they were not welcome any longer, which gave them the incentive to finally either close their businesses or move out of the North Side.

But Police Precincts seemed to be protected by an unwritten law which kept protesters away.  I do not remember any police precincts being targeted at that time.

How it is possible that George Floyd’s killing could have sparked such hatred in a group of rioters not only in Minneapolis but all over the US to result in such massive widespread damage. There have been many comments and theories behind this but I feel it is a reasonable conclusion that this was not the work of groups of rioters who arrived randomly, but instead it was an organized group of anti-Americans who wanted to create chaos within many US cities. And it was law enforcement personnel that suffered the most.

It was President Trump and Vice President Pence who stood up in front of the Tulsa crowd and proudly declared that while they are in office, they will “Never Defund The Police”. President Trump during his speech also commented on the number of judges he has appointed and they both declared that they will continue to run on a strong platform of law and order.

This Also Should Apply To Congress

But I contend that this applies not only to our courts and police, it should also apply to Congress. No lawmakers should be allowed to remain in their seats as long as there is clear evidence that they have violated any laws.

In that case, an investigation should be conducted and if found guilty, that lawmaker should be removed from his or her seat immediately.

Unfortunately, the reality is that Congress is not doing its job in this respect and that affects all Americans.

This is therefore a warning sign that all Americans must pay attention to very closely.