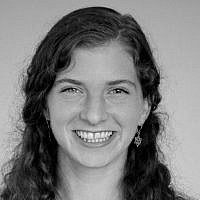 The Blogs
Stephanie Margolis
Apply for a Blog
Please note that the posts on The Blogs are contributed by third parties. The opinions, facts and any media content in them are presented solely by the authors, and neither The Times of Israel nor its partners assume any responsibility for them. Please contact us in case of abuse. In case of abuse,
Report this post.

On a campus like UMass Amherst, it is really easy to stay in your small bubble of friends and feel comfortable throughout your four years in college. I, however, constantly have tried to reach beyond what I know and learn new perspectives. My identity consists of many various pieces, one of which being that I am Jewish and a part of my Judaism makes me a Zionist. A Zionist is a person who believes in the Jewish people’s right to self determination in some part of the Jewish ancestral home – Israel. As a Zionist, I know a lot of information about the Israeli – Palestinian conflict, but I wondered if the history I knew was biased. So, I decided to attend an event on campus hosted by UMass Students for Justice in Palestine (SJP): Palestine 101.

I came to the New Africa House on Tuesday, February 18th for the presentation prepared to take notes and participate, but mainly I went to listen because I often wish that people would listen to what someone like me says without assuming what I would say. What I was not prepared for, however, was the following onslaught of antisemitic remarks expressed throughout the presentation.

It was a shame to watch a cause like justice for Palestinians focus more on hatred of Jews than a means to peace, prosperity, and equality for all people. In this almost two hour presentation, not only were antisemitic tropes repeated, but history was falsely told to an audience of 40 people.

SJP may not want the facts to get in the way of their story, but I will make sure that the truth is told. The following explains three of the tragic issues during the presentation.

I actually asked a clarifying question as I was dumbfounded that anyone educated in Massachusetts of all places could make such a statement. I asked how it was possible that the Zionist Jews collaborated with the Nazis who were calling for the death of all Jews. The answer, given by one of the presenters was that the Nazis prioritized which Jews they killed, killing the poor communist Jews first and apparently not killing the rich Zionist Jews at all. Yet, when researching the final solution of the Holocaust where Hitler decided to murder all the Jews, not just some of them, it is made clear that the means to solving the “Jewish problem” would be killing centers, not shipping Jewish populations to the Middle East. Check point two to see this reiterated during the presentation.

2. It was explained that the White Powerful Antisemitic European governments supported Zionism because they wanted all of the Jews in their countries to move out.

This is not true. While Jews in many countries of Europe faced antisemitism and are still facing antisemitism today, these European governments did not want to transfer all of their Jewish populations to the Middle East. Actually, even during the Holocaust, Jewish immigration was limited by the British to appease Arab demands in a document call the White Paper.

3. The presenters mentioned the UN Partition Plan and said Israel seized more land in their Independence war than they were allotted in the Partition

What the presenters forgot to mention was the background history of the UN Partition plan. I asked a clarifying question to see if they understood more of the background and found that they had no idea how the Partition plan came to be and they also forgot to mention that the Arab leadership declined the UN Partition plan in November, 1947, making it a moot point to say that the State of Israel took this land or that land in the 1948 War. There was also no mention of the 1937 Peel Commission plan which was also rejected by Arab leadership.

Many other points in the presentation made it clear that there was a lack of education among the leaders of the group. Whether it was conceding to the fact that there has been a Jewish presence in the land of Israel since biblical times, but then backtracking to explain that the Jews stole all the land, or when a member of SJP claimed that Hamas, a political party in Gaza and terrorist organization dedicated to destroying the Jewish state, recognized Israel, I was disappointed to find that a space like this exists on my campus.

Demonizing, dehumanizing, and blaming Jews/Zionists/Israelis will not help in bringing different people with conflicting narratives together. Only through respectful dialogue and nuanced discussion can there be a future hope of peace.

About the Author
Stephanie Margolis is a senior at UMass - Amherst. She hopes to create nuanced conversation surrounding the Israeli-Palestinian conflict.
Related Topics
Related Posts
Comments