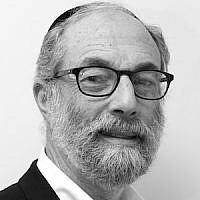 The Blogs
Eliya Stromberg
Apply for a Blog
Advertisement
Please note that the posts on The Blogs are contributed by third parties. The opinions, facts and any media content in them are presented solely by the authors, and neither The Times of Israel nor its partners assume any responsibility for them. Please contact us in case of abuse. In case of abuse,
Report this post.

Yesterday, my son missed his bus to school.

Every two weeks, he comes home for Shabbos from his school outside Jerusalem where he lives in an apartment with five other guys. He boards a bus that starts at his school and gets out in Jerusalem under the String Bridge. From there, he takes a local bus home.

Yesterday, I awakened him at 5:45 a.m. to be ready for the 6:30 bus back to school. I drove him to the bus stop so that I could spend a few more minutes with him. As I dropped him off, I looked at him. He was wearing cargo shorts and a polo shirt, his tzistzis hanging out. He had on sandals without socks. His backpack was slung over his shoulder. A pair of metallic blue wrap-around sunglasses made him look cool. My son is powerfully built, with exceptional muscle strength. (He is a four-time gold medalist in bicycling competitions in Israel. He holds additional medals in horseback riding and basketball.)

As my son stood confidently at the bus stop next to the soldiers, yeshiva students, and others waiting for the bus, it was only when he lifted his sunglasses off his eyes that one could know that he has Down syndrome.

In Israel, navigating buses is a skill that typical children begin learning at a very early age. It is common to see 6- and 7-year-olds without adult supervision riding public transportation. It is one of the ways a typical child builds independence and self-reliance. My son is 26. He only started learning how to use public buses a year ago. Before that, he never went anywhere unless an adult, a sibling, or a responsible child/adolescent was with him. For nearly 25 years, he never assumed responsibility for himself to travel from one place to another; he depended on someone else to lead him.

Learning to travel on buses did not come easily for my son. A teacher in his school traveled with him on the bus once a week for nearly six months. She taught him the skills, the rules, and the cues he needed. For example, in Jerusalem, the main bus company, Egged, subcontracts with independent bus carriers on some routes. But who thinks about it?  If the number on the bus is the number you need, you get on. You don’t care if the bus is painted green or blue. But if you take your cues from colors and you are looking for a green (Egged) bus, then when a blue bus comes, even though it has the correct number on it you might not get on. And if the number is not displayed at the top of the windshield where it usually is, but rather on a placard at the bottom of the windshield in very small numbers near the door, a disabled child may not see it and then would miss that bus.

Every little movement that is required to get on the correct bus, pay the correct amount, interact with people properly, see cues indicating where to get off, and exiting with all your belongings my son practiced over and over again for six months. A typical child learns these things in a few trials.

Four months ago, my son graduated “public bus riding school” and began to travel on his own. This marked a major milestone in his developing independence and self-reliance. It has also significantly bolstered his self-confidence. He stands at the bus stop (with sunglasses down) completely indistinguishable from those around him.  For a young man who has been stared at all his life, blending in makes him feel whole. But yesterday, he missed his bus. And it deeply affected him. And me.

When most people miss their buses, at worst they groan, feel “put out,” but then figure out what to do next. They certainly don’t lose confidence in themselves to catch the next bus. But that was my son.

Yesterday, at 7:00, my wife called our son to confirm that he was on the 6:30 bus. He told her that he was still waiting for it to come. She called Egged to see if in fact the bus was so late and was told it had stopped at the String Bridge station on time. My wife called our son and instructed him to come home on the local bus. The next bus was scheduled for 9:30. When I asked my son what happened, he couldn’t tell me. He has a speech impediment that is exacerbated when he is upset or agitated. When he tried to tell me about waiting and waiting, and the bus not coming, he couldn’t order his thoughts to find the words. All I got was his “shut down” line: “I don’t know.” When he says that, I know there is nothing more at that moment he can say.

I never found out what happened. But it didn’t matter. I wanted him to go back to the String Bridge bus stop on his own to catch the next bus. My attitude was: Okay, so you missed the bus; it happens sometimes; go back and do it right this time. (Did you notice I wrote: “do it right this time”? I didn’t realize it until I wrote it, but I felt critical of my son; he “didn’t do it right.” I fear he heard my criticism in the tone of my voice, even if I didn’t say those exact words.) He said: “No”. He wanted someone to wait with him until his bus arrived. He didn’t want to risk missing his bus again. Or was it that he didn’t want to risk disappointing me by “doing it wrong” again?

There is no justification for my critical tone. My son didn’t do anything wrong. He missed his bus. It happens sometimes, right? But I so much want my son to be like those soldiers, yeshiva students, and others who don’t miss their buses. Deep down, as much as I love my son and as much work as I have done on myself to accept his genetic anomalies, I don’t want him to have to wear sunglasses to blend in with the crowd. And I want him to get it right.

It is a life time journey that a father of a son with a disability travels to unconditionally accept his child. I hope I don’t miss the bus.

About the Author
Eliya Stromberg is native to Los Angeles and has been living in Jerusalem with his wife and three children for twenty-seven years. His second son was born with Down syndrome. He is a former public and Jewish day school principal in states of Kansas, California, and Pennsylvania. Eliya is Founder of FathersConnect.com, an organization aiming to connect fathers more deeply to their special child, and in turn to themselves., as well as author of Chosen Fathers: Life Lessons learned from Fathers of Children with Special needs.
Related Topics
Related Posts
Comments