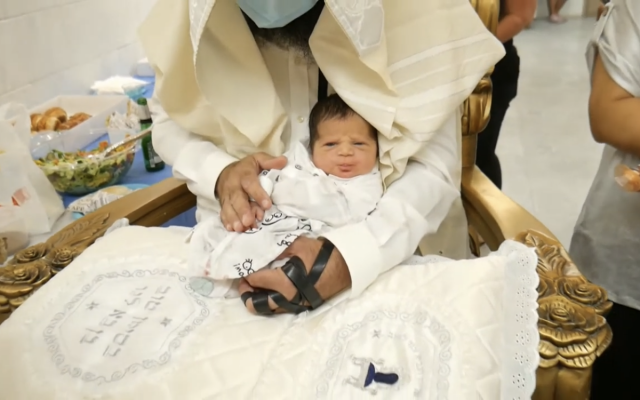 I had the distinct privilege of performing both of my son’s Britot. Since I am a mohel in Jerusalem, they were far from the first nor will they be the last I will do — and I wouldn’t have missed them for the world. Being surrounded by family and friends, having my father and then father-in-law serve as the Sandek (the person who holds the baby during the ceremony), was deeply meaningful. Other than the Simchat Bat of each of my daughters, little has compared. Serving as the mohel, the one who brought them into the covenant, has left an indelible mark on my consciousness.

But there are those who advocate skipping this defining moment, to replace it with a demoted version of the ritual, thus leaving many Jewish babies outside the fold. These individuals report they have made their choices in the name of health, safety, and morality, but their claims are nothing more than smoke and mirrors.

In the recent Forward piece, entitled “Is coronavirus a reason to skip the bris?” Rebecca Wald attempts to make this very case. She raises many unsubstantiated claims, that to the untrained eye may seem like strong arguments against Brit Milah — but don’t be fooled.

Wald asserts that there is a loss of sensitivity after circumcision and that the foreskin is erogenous tissue which, when excised, robs men of their sexual potential. She’s referring to the claim that the foreskin contains 20,000 nerve endings. This is a major exaggeration taken from a limited amount of data gathered in a study done by Henry C. Bazett in 1932.

“Bazett counted 212 nerve endings of all types in a single square centimeter. Only 2 of the 212 nerve endings were fine-touch receptors […] and none were genital corpuscles, the ones that most experts attribute to erogenous sensation.”

The anti-circumcisionists took the number Bazett found, measured the area of the skin which is generally removed in the procedure and multiplied. But there have been no studies done to measure the actual number of nerve endings that exist in this region. Another article does an in-depth analysis of the issue of sexual sensation in the foreskin. Although it is a highly debated topic, the article, as well as other studies, conclude that there is no basis for the assertion that removing the foreskin desensitizes the sexual organ. Additionally, there are many proven medical benefits to circumcision; the list can be found here.

Complications in circumcision are something that no one wants to think about or, even worse, experience. But the statistics show that complications occur at a staggeringly low rate:

“The rate of procedure-related complications during and after circumcision in the neonate is approximately 2 to 6 per 1000. This rate increases 20-fold for boys who are circumcised between one and nine years of age, and 10-fold for those circumcised after 10 years of age.”

Perhaps more important than the low frequency of occurrence is the rate at which the likelihood of complications increases with age. Any medical professional will tell you that the safest time to perform a circumcision is as young as possible, that is, around eight days. And that’s not even taking into account the barbaric nature of a child having to go through the procedure later in life.

Wald also contends that there is an ethical violation of consent when it comes to Brit Milah. If it were true that the procedure could not be done without the child’s permission, then we would have many other problems on our hands. We couldn’t vaccinate our children or even fix a cleft palate.

Neither of these is, nor should they be, heavily debated topics. Parents make decisions for their children at every step of the way — it’s called parenting. And if we refrained from making these choices because in the future our children may disagree with our verdict, then we wouldn’t even be able to choose their school.

Probably the most astounding assertion Wald makes is pointing out which Jewish celebrities have come out against Brit Milah. The list consists of individuals such as Rosanne Barr and Howard Stern. I’m not sure about you, but when it comes to my religious outlook, and who I seek direction from, these individuals do not make the cut. I put my faith in those who’ve toiled day and night in our sacred texts, such as the Rambam, Rashi, and Yosef Karo, as well as a litany of modern rabbis. If anything, Wald’s quoting these celebrities has made the case for circumcision that much stronger.

Wald views the coronavirus period as a time of reflection, where she hopes other Jews will follow in her footsteps and leave the fold. But in recent days we’ve seen the exact opposite. There are those who have had to take charge of this ritual in the most unlikely of circumstances. As the Times of Israel reported, a father in New Zealand was unable to procure a mohel for five months due to the COVID lockdown. After consulting with doctors and rabbis, he performed the ritual for his son just as Abraham did for Isaac in the days of yore. This father, just as I did, brought his son into the covenant — only he was unable to train beforehand. I hate to be the bearer of bad tidings for Rebbeca Wald and those in her camp, but despite their best efforts, Brit Milah is just as strong today as it was in the Biblical era. And thank God for that.

About the Author
Rav Hayim Leiter is a rabbi, mohel, wedding officiant, and member of a private Beit Din in Israel. He founded Magen HaBrit, an organization committed to protecting both our sacred ceremony of Brit Milah and the children who undergo it. He made Aliyah in 2009 and lives in Efrat with his wife and four children.
Related Topics
Related Posts
Hayim Leiter
Comments