My wife Miriam and I learned about the Passover as the Holiday of Freedom by participating in creating a Jewish community for the holiday on the Greek island of Crete.

I photographed hand-made round matzah, machine-made rectangular matzah, and the raising of the Torah scroll there. These matzah shapes in relation to the spiral challah eaten when Passover ends give us clues to understanding the structure of Jewish consciousness.

I write the following sentences as Twitter tweets based upon the “Torah Tweets” blogart project that I created with my wife Miriam http://bibleblogyourlife.blogspot.com.

My latest book Through a Bible Lens: Biblical Insights for Smartphone Photography and Social Media http://throughabiblelens.blogspot.com explores the conceptual background for Bible blogging. It is written in the language of digital culture and social media for dissemination throughout the Twitterverse and blogosphere.

My wife and I celebrated Passover participating in reestablishing a Jewish community in Crete where Jews lived for two millennia.

In 1944, the Nazis herded the Jews of this Greek island into a ship that was torpedoed. All 300 Cretan Jews drowned enroot to Auschwitz.

For Passover, 300 Jews flew into Crete from three continents to create a Jewish community in a holiday village overlooking Daios Cove.

The entire village was rendered kosher for Passover. Circular hand-made matzah and rectangular machine-made matzah were served at meals. 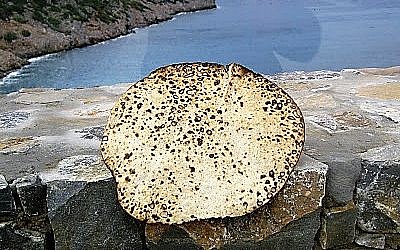 Round matzah symbolizes idolatry. Since words in the Torah scroll are written without vowels, calf (EGeL) can also be read as circle (EGuL).

The idolatrous transgression of the Israelites was their worship of Ra, the sun God represented in Egyptian art as a golden circle. 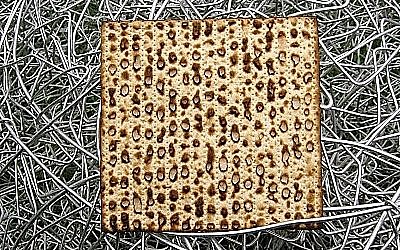 Rectangular matzah symbolizes slavery. The Egyptians enslaved the Israelites in the malben, meaning both brickyard and rectangle.

Mitzrayim, the biblical name of Egypt, means narrowness. The exodus into the wide expanses of the Sinai desert expanded consciousness.

Jews recite these words from Psalm 118 in their prayers: “From narrow straits I called out to God. God answered me with expansiveness.”

As we break matzah to eat them, we break out of the box and circle, both closed forms, breaking away from narrowness of thought.

The spiral form is the shape of DNA molecules in our cells and in cells of all plants and animals. It is the growth pattern of life, of palm fronds and nautilus shells. 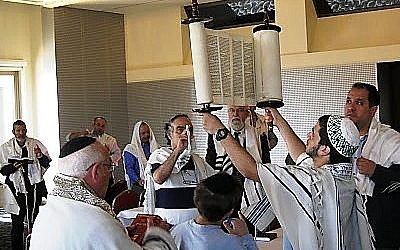 Jews are called Am HaSePheR, usually translated as “People of the Book.” However, SePheR means scroll predating books by millennia.

The SPR root in SePheR found its way into the words SPiRal, SPiRitual and inSPiRation.

The Torah scrolls hand-scribed on parchment that we read publicly in Crete on Passover are the same as the scrolls read by Jews worldwide for centuries.

Like the rectangular matzah symbolizing slavery, trapping the endless flow of the Torah scroll between two rectangular book covers enslaves it.

Below is rabbinic praise for Through a Bible Lens. See praise from experts in digital culture and Christian friends of Israel at the book’s blog http://throughabiblelens.blogspot.com.

“Through a Bible Lens is a wonderful synthesis between spirituality and technology, heaven and earth, is exciting and thought-provoking.” Rabbi Chanan Morrison, author of Sapphire from the Land of Israel

“A mystical computer program for spiritual seeing. Mel Alexenberg is a wonderfully accomplished worker on a great project: to make art a conduit for the Divine. Rabbi Dr. Shimon Cowen, director, Institute for Judaism and Civilization, Victoria, Australia

“Provides the perfect model for the best usage of smartphones and social media to encourage greater appreciation for the Bible and the Land of Israel.” Rabbi Tuly Weisz, editor The Israel Bible; publisher of Israel Breaking News

“A practical guide for photographing the splendor of God by opening your eyes in wonder in whatever place you find yourself. Seeing with eyes of wonder is seeing for the first time every time.” Rabbi David Aaron, author of Seeing God; dean, Yeshivat Oryta and Isralight, Jerusalem, Israel

“An astonishingly innovative book. Alexenberg is able to perceive a Godly gaze not only in nature around us or the heavens above, but in the smartphone we hold in our hand.” Rabbi Joshua Hammerman, author of thelordismyshepard.com: Seeing God in Cyberspace

“Prof. Alexenberg sees godliness and goodliness in the most mundane, and instructs others to behold that vision. We are blessed to have such a wise teacher in our midst.” Rabbi Bezalel Naor, author of The Limit of Intellectual Freedom: The Letters of Rav Kook

“Strikes a balance between Kabbalah and contemporary culture. It is replete with imagery from both universes. It is literate, wise, and easily accessible.” Rabbi Lawrence Kushner, author of God Was in This Place & I, i Did Not Know: Finding Self, Spirituality and Ultimate Meaning