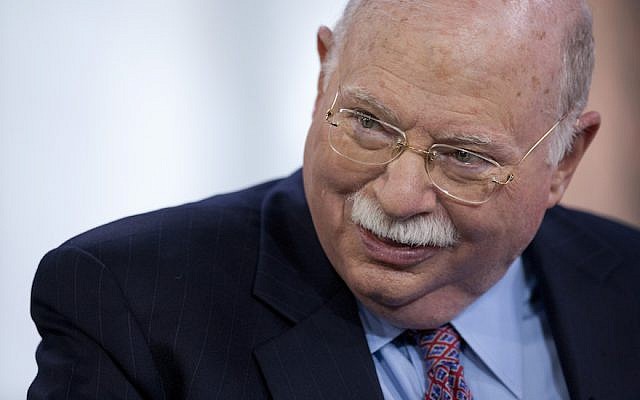 Michael Steinhardt, chairman of WisdomTree Investments Inc., speaks during an interview in New York, US, on April 12, 2012. (Scott Eells/Bloomberg via JTA)

The New York Times report about megadonor Michael Steinhardt’s history of sexual harassment should come as no surprise to anyone following the #metoo movement or the excellent reporting of Hannah Dreyfus. The Jewish Week published an investigative story by Dreyfus about Steinhardt last year, although there was very little tangible fallout from the piece – which should give a sense of how well-protected donors are in our community. This story, coming on the heels of the Genesis Foundation’s refusal to part ways with Robert Kraft even after his arrest for using sex-trafficked girls for sex – and the foundation’s preference for cutting ties with programs to fight sexual harassment rather than lose a megadonor – tells us everything we need to know about how fundraising culture contributes to the problem of sexual abuse in our community, as Barbara Dobkin wrote earlier this week. Where donors are king, women’s well-being just doesn’t matter.

There are many other important insights that emerge from this invaluable article. For one, according to the testimonies in the article, Steinhardt usually did not touch any of his victims — he just propositioned them and pressured them, from a position of power and authority. As we learned with Barry Freundel’s conviction on video voyeurism in the mikveh, sexual abuse does not always involve touching, and yet can still have traumatizing impacts. Sybil Sanchez wrote an excellent piece about this last year.

Another important insight is that high-profile men tend to protect high-profile abusers — especially if they are donors. According to the report, people around Steinhardt knew about all his proclivities. People running his organizations knew. People taking his money knew. Occasionally they would pay lip service to victims. More often, victims were nor heard or heeded in any meaningful way. This is the real disease in our community – knowing that sexual abuse is happening, and doing nothing, or worse, defending the abuser.

Another key issue is understanding that the role of ‘donor’ is just as powerful as the role of ‘boss’ or ‘teacher’ or ‘rabbi’ in terms of the ability to engage in abusive behavior. Our policies, procedures and laws on sexual harassment do not really address this, as Cheryl Moore so powerfully explained. The connection between money, philanthropy and sexual harassment needs more attention and clarification in our community.

Perhaps the most striking aspect of the Steinhardt report can be seen most glaringly in the comments section of the New York Times. The most pronounced debates revolve around the Jewishness of the story, about why the Times put the descriptor “Jewish” into the headline, and emphasized his Jewish-connected philanthropy in the story.

“This article is plain and simple anti-Semitism!” wrote one commenter from Texas, a sentiment that was repeated in at least a dozen other comments. “No other people accused of sexual harassment were identified by their religion. This flames anti- Semitism,” wrote someone named Abby. “In this volatile and divisive time, please use your heads!” wrote Edward of London. Sue Mee from Hartford called the article a “hit piece”, and added that it “appears to be the side door entrance from the BDS movement.” Significantly, she continued to dismiss sexual harassment in general by saying, “These women are so threatened by a few jokes with sexual innuendo from one of the most well known Jewish philanthropists at the same moment J Street is promoting its alternative “view point” trip to Israel. It is all very convenient.” And someone named WiseNewYorker of New York City wrote “The headline of this news story is blatantly anti-Semitic. ….An apology is owed to the entire readership of this paper.”

At the risk of stating the obvious, I would like to point out that the women sharing their stories of abuse were clearly not motivated by anti-Semitism but rather by the desire to tell the truth and promote justice. Moreover, it is worth pointing out that the victims are all Jewish themselves, which makes the anti-Semitism accusation ridiculous – almost as ridiculous as painting the story as some kind of BDS conspiracy. It’s ridiculous, of course, unless we forget that the women are Jews, too. Perhaps when these commenters talk about Jews being under attack, they are not really considering women part of the collective, which is a definite possibility in our community. So suddenly the victims morph into Enemies of The Jewish People, as if the women are outsiders looking in.

The reason why this is a Jewish story is because Steinhardt himself is a Jewish story. His whole identity and persona are wrapped up in acting on behalf of the Jews. The (alleged) incidents took place in Jewish cultural settings, and were often wrapped up in Jewish language – such as the need to propagate the people. Moreover, his actions were justified by so many of his enablers based on his Jewish record, on the importance of his “generosity” for the Jewish people. The culture of supporting abusers instead of victims because of the perceived needs of the Jewish collective is a quintessential Jewish story.

One of the key takeaways from this report, then, is, the way “the Jewish People” is co-opted as an excuse and a cover. Like, it was okay for Steinhardt to demand sex because Jewish women need to make babies for The People. Or, it’s okay for the donor to be brash because, you know, he’s the great Protector of the People. Or, when a victim wants to report, she is told, “Don’t make waves” because the Jewish People – or, perhaps the surrounding organization – needs this great donor for our existential survival.

Whatever it is, what we see over and over again is that we are told that the needs of the People come before the needs of the woman. As if the woman whose life and livelihood is on the line isn’t quite the same as the tribe. She is expendable. That is the core message. The donor is king, the donor is irreplaceable, but the woman – meh.

Since the advent of #MeToo, the world is finally starting to get a portrait of sexual abuse, an understanding of just how hard it is to deal with abuse, and how hard it is to report it. But we as a community have not yet come to terms with how these dynamics play out in our own institutions and communities. The Steinhardt story provides us with some crucial insights about the extra challenges that victims have in our own community. The co-opting of the Jewish narrative as a cover for abuse is clearly a central theme. Let’s not let that narrative take the place of the real lives and real needs of the women in our midst who, actually, are just as invaluable as any donor.

About the Author
Dr Elana Maryles Sztokman, two-time winner of the National Jewish Book Council Award and winner of the Gourmand Award, is a Jewish feminist author, activist, educator, researcher, indie-publisher, coach, consultant, and facilitator. She is the founder of the Jewish Feminist Academy (www.jewishfeminism.org) as well as Lioness Books and Media (www.lionessbooks.com) She writes and speaks widely about culture, society, gender, and equality. She has been involved in many causes, is one of the founders of Kol Hanashim, the new women's political party in Israel, and is Vice Chair for Media and Strategy for Democrats Abroad-Israel. Follow Elana's newsletter, The Roar, for news and updates, at https://elanasztokman.substack.com/ or contact her at elana@jewfem.com
Comments