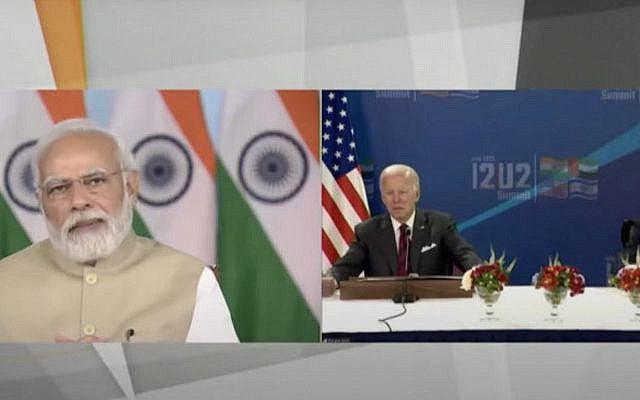 After being engaged on the Russian front for most of the path months the United States is making its presence felt globally in a strong attempt to reiterate its position as the world’s only leader. It started off with  President Biden’s visit to the Middle East. Much has  happened since his predecessor visited the Middle East, the Abraham Accords and the move of the US embassy to Jerusalem had taken the US relationship with the Palestinian Authority to historic lows. Biden’s July visit lacked any “flash and awe” that are followed by US presidential visits. The two-state solution was further postponed for another day. Positives included permission for all Israeli flights to use Saudi airspace. This is wonderful for shorter flights from and to Israel.

What was also significant was the I2U2 summit where President Biden and Prime Minister Lapid virtually hosted UAE’s President Shiekh Mohamed bin Zayed and India’s Prime Minister Narendra Modi. The I2U2 (India-Israel-United States-United Arab Emirates) is a new grouping, formerly known as the West Asian Quad, which the US has encouraged to hold Iran in check. While each of the countries have difference relationships with Iran, their joint interests aim to protect Israel from right out Iranian aggression.  A lacklustre visit which did not succeed in getting the Saudis to increase oil productivity to offset the sanctions on Russian oil, the President also had to make concessions by publicly meeting Saudi Arabia’s crown prince Mohamed bin Zayed, whom he has vilified in the past for the killing of Saudi Journalist Jamal Khassoggi and close links to Trump’s son-in-law Jared Kushner.

One failure may have inspired another move on the chess board which is the Indo-pacific….

‘Dragons are imaginary but eagles are real.’

This is the buzz in the social media since the landing of an American military aircraft carrying the Speaker of the US House of Representatives Nancy Pelosi in Taipei airport on August 2, 2022.

People’s Liberation Army of China on July 30, 2022, held a military exercise off the coast of Taiwan, using live artillery shells, to scare away an 82-year-old unarmed woman from visiting Taiwan. China’s aggressive stance did not pay dividends, Nancy Pelosi ignored the threats and visited Taiwan as a part of her Asian trip.

On her arrival at Taipei, the Speaker of the US House assured the people of Taiwan that the visit of the five-member delegation of the US Congress which she had led demonstrated that America would not abandon its commitment to the self-governing island which Beijing has wanted to integrate with mainland China by force. Since Russia’s attack on Ukraine, China’s language on Taiwan has become much more aggressive.

“Today, the world faced a choice between democracy and autocracy,” she said, summing up the issues at stake, “America’s determination to preserve democracy, here in Taiwan and around the world, remains ironclad.” She also emphasised that the Congress was committed to the security of Taiwan, so the people of Taiwan could most effectively defend themselves.

US National Security Council Coordinator for Strategic Communications John Kirby correctly described the threats from Beijing as “Chinese rhetoric,” saying it was pointless. “It is not uncommon for Congressional leaders to travel to Taiwan,” he said.

He also made it clear that Washington was not overawed by Beijing’s brazen muscle-flexing. The Biden administration would support Pelosi on a trip to Taiwan, Kirby said. “We want to make sure that when she travels overseas, she can do so safely and securely and we are going to make sure of that,” Kirby told CNN in an interview on August 1.

Kirby said the USA, as a country, should not be intimidated by rhetoric and potential actions by China. “This is an important trip for the Speaker to be on and we are going to do whatever we can to support her.” Helping Pelosi visit Taiwan, Kirby said, would be a continuation of the US policy of “trying to keep a free and safe and open Indo – Pacific.”

On August 1, Foreign Ministry spokesman of China, Zhao Lijian was not too sure, however, what steps the Chinese military would take if Pelosi did visit Taiwan. “If she dares to go, then let us wait and see,” he said in reply to a question in a news conference on what kind of measures could the PLA take to prevent Pelosi from visiting Taiwan. Ultimately, after Nancy Pelosi landed in Taipei on the night of August 2, the Chinese army carried out a few live-fire missile drills and some Chinese military aircraft flew close to the Taiwanese air space.

Song Ao, a 21-year-old university student in Beijing whom the AP quoted in a report on August 3, understood, however, what senior members of the Communist Party of China perhaps could not. “China and the US need each other in trade and other aspects. I think we must exert pressure in response to Pelosi’s Taiwan visit, but not fight,” she said. “There is not much we can do,” said a rather philosophical 70-year-old Wang Junzhong.

The White House has  warned China against overreacting to the trip by Nancy Pelosi to Taiwan, saying she had every right to visit the self-ruled island.

The Chinese threats about disastrous consequences of Nancy Pelosi visiting Taiwan continued to pour in despite the clarification of the United States government that the visit by the US House Speaker to Taipei would not change the American policy towards Taiwan; which was that the USA would not recognise Taiwan diplomatically but would not allow Beijing forcibly to change the status quo in Taiwan.  The US formally continues to support a “One China policy”.

The White House cited the independence of the legislature from the executive to justify its non interference with Speaker of the House, Pelosi’s plans. As US Secretary of State Antony Blinken told reporters on August 1 evening: “It is for Nancy Pelosi to decide if she would visit Taiwan or not.” Its rare that the Speaker would embark on such a venture without tacit support and encouragement from the President.

Clearly, for the Chinese, where power is concentrated in the hands of one person, such an explanation did not go well. President Xi Jinping is the head of the state, the party as well as the military. For proponents of autocracy, it is difficult to grasp the nuances of the liberal democratic system.

This wasn’t the first visit by a US Speaker of the house to Taipei. Speaker of the US House of Representatives Newt Gingrich had visited Taiwan before without an incident in 1997.Many members of the US Congress have visited the island even in 2022. The Chinese reaction to Pelosi’s visit however was aggressive and incomprehensible, despite explanations.

According to observers, Beijing dislikes Nancy Pelosi in particular as she has been a vocal critic of China, denouncing its human rights records. She visited Tiananmen Square in 1991 to commemorate victims of the massacre of 1989 and unfurled a black flag there, despite strong opposition by Chinese security personnel. She is particularly disliked by China because she is an admirer of the Dalai Lama and a disciple of the Tibetan spiritual leader. Beijing knows that the Chinese occupation of Tibet is illegitimate, and the Tibetan struggle for self-rule and independence will remain alive as long as the 14th Dalai Lama and the institution of the Dalai Lama remain alive. The Dalai Lama is, therefore, another anathema to Beijing.

Despite the possibility of China stepping up its military threats against Taiwan, Taipei has welcomed Nancy Pelosi’s visit to the island. “We are very grateful to Speaker Pelosi, who has been very supportive and friendly to Taiwan for many years, and we would welcome any friendly foreign guest to visit,” Prime Minister of Taiwan Su Tseng Chang has said.

I led a Congressional delegation to Taiwan to make crystal clear that America stands with the people of Taiwan – and all those committed to Democracy and human rights.

Check out this video of our historic visit to Taipei. pic.twitter.com/TON6zB3x4s

Observers say that for the diplomatically isolated government of Taiwan, any exchange with a foreign political leader is seen as a welcome development. Beijing has left no stone unturned to isolate Taiwan on the global stage, opposing all official exchanges between the island and other governments. Among the friends of Taiwan, some of the smaller nations have been incentivised with resources and support from Beijing. Bigger countries, even European nations, have been threatened for sending official visitors to Taiwan.

On August 4, after Nancy Pelosi had left, the Chinese military started an exercise close to the Taiwanese coast, using missiles and live artillery, infringing on busy international sea and air routes. Not overawed by the threatening actions of the Chinese military, Taipei said it was determined to defend itself against any Chinese invasion.Ahead of Nancy Pelosi’s visit to Taiwan, Taipei put its military on high alert, cancelled leaves of officials and mobilised its air defence forces against a possible Chinese attack and carried out military drills.

The G-7 countries have condemned the Chinese military drill, saying there was no justification for it, using Nancy Pelosi’s visit as a pretext.

The New York Times News Service reported from Taiwan on August 2 that the political reality hardening over the last decade was that many in Taiwan had grown weary of China’s threats and craved for support from the United States. Political parties in Taiwan had largely offered support for the trip of Nancy Pelosi. Even the generally China-friendly Kuomintang Party had cautiously welcomed the visit of the Speaker of the US House of Representatives.