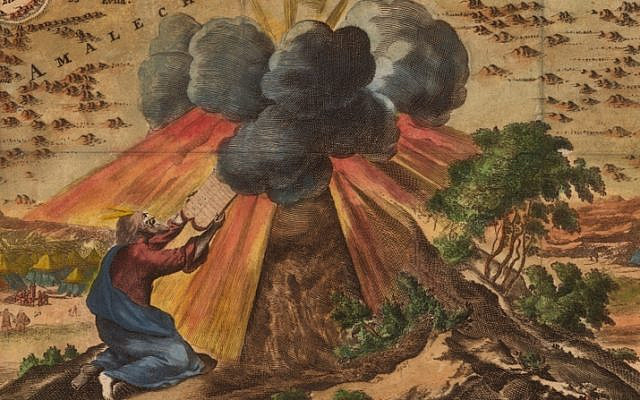 What does that mean? How can sounds be seen? What do they look like?

Though every word in the Torah has been scrutinized and analyzed for generations, this description — provided in the context of the Israelites receiving the Torah at Mount Sinai — seems particularly enigmatic.

The answer is certainly not obvious nor clear, and like any good Jewish question, it has been asked and answered in some very interesting ways across the ages.

Many understood it quite literally – the letters that make up the Ten Commandments themselves appeared in the air, for all to see. 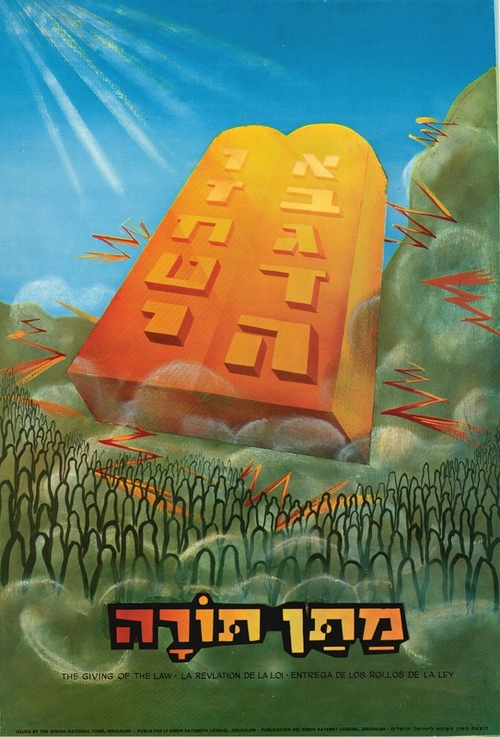 Some took a bit of a more mind-bending approach, explaining — in various ways — how at that critical moment in the Jewish story, the Israelites were on a different physical and spiritual plain… All their senses merged together.

Still, other commentators rejected both of those explanations, instead opting for a more rational approach: the description was not to be understood literally. Just as someone who understands something might say, “I see,” so, too, did the Israelites “see” the commandments they were receiving.

Given the ambiguous nature of these particular words, it seems no wonder that artists over the centuries who wanted to draw the scene largely focused on concepts and imagery that would be a bit easier to convey.

In celebrating Shavuot — the Festival of the Giving of the Torah — here are a few depictions from the National Library of Israel collections, ranging from the sublime to the (all but) ridiculous…

Let’s start with the sublime…

This gorgeous 15th century Italian prayer book shows Moses atop Mt. Sinai receiving a Torah scroll from Heaven. You have to give the artist credit for making efforts to show the sounds and shofar blasts referenced in the original text… those shofars are clearly blasting right down to Moses and all of the Israelites below! 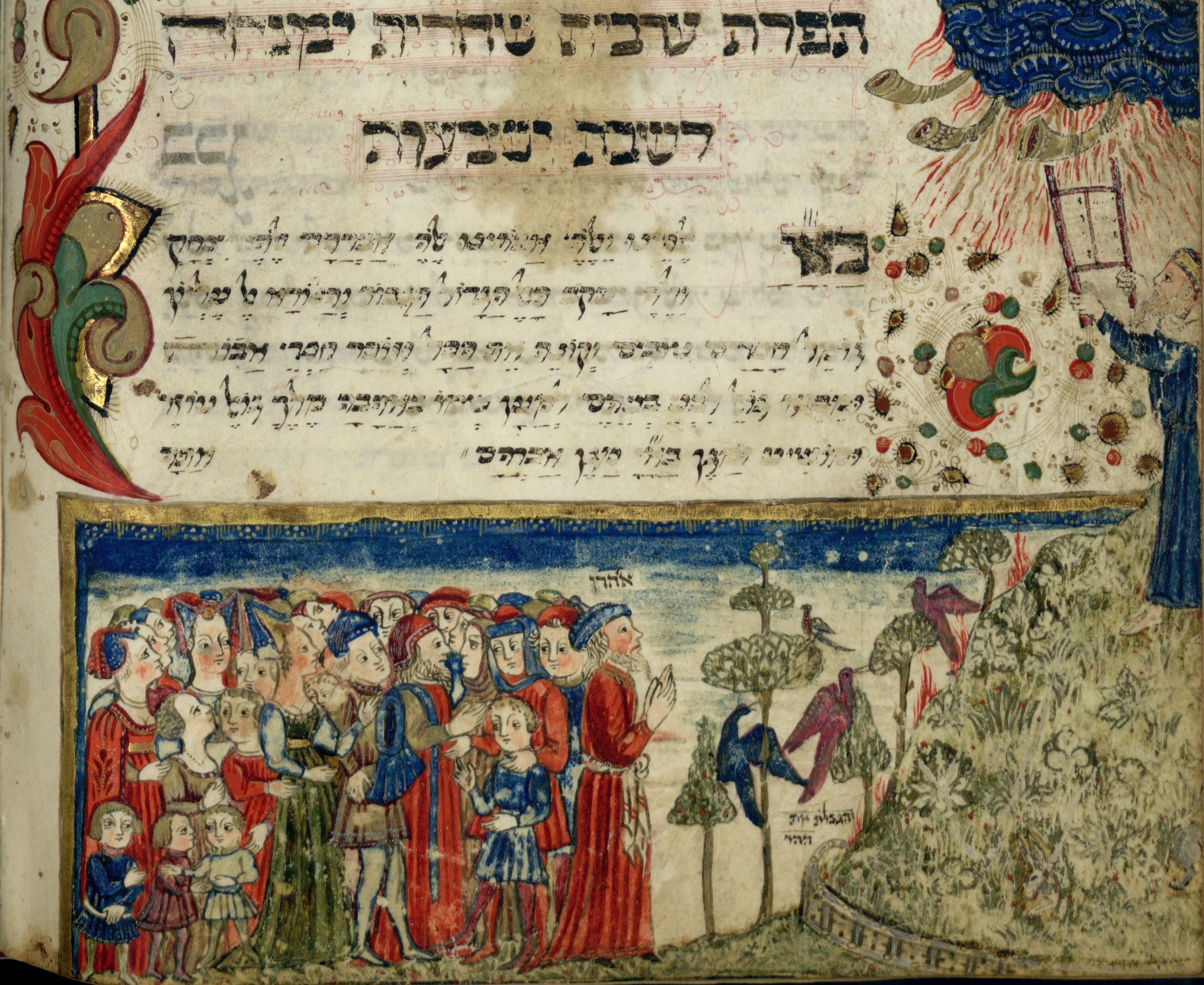 Prayer book according to the Roman rite, ca. 1450. From the National Library of Israel collection. Click image to enlarge

Less colorful (and less Jewish) — though no less detailed — our next depiction comes from one of the first printed books to integrate images and text. Liber chronicarum, published in Nuremberg in 1493, is an historical encyclopedia printed in Latin and shortly thereafter in German.

Though depicting God is generally a “no-no” in Jewish sources, it was okay for the Christian artists who created this work, showing God Himself giving a horned Moses the Ten Commandments!

In a seeming contradiction to the biblical text, Israelites are shown waiting for the Law rather patiently. 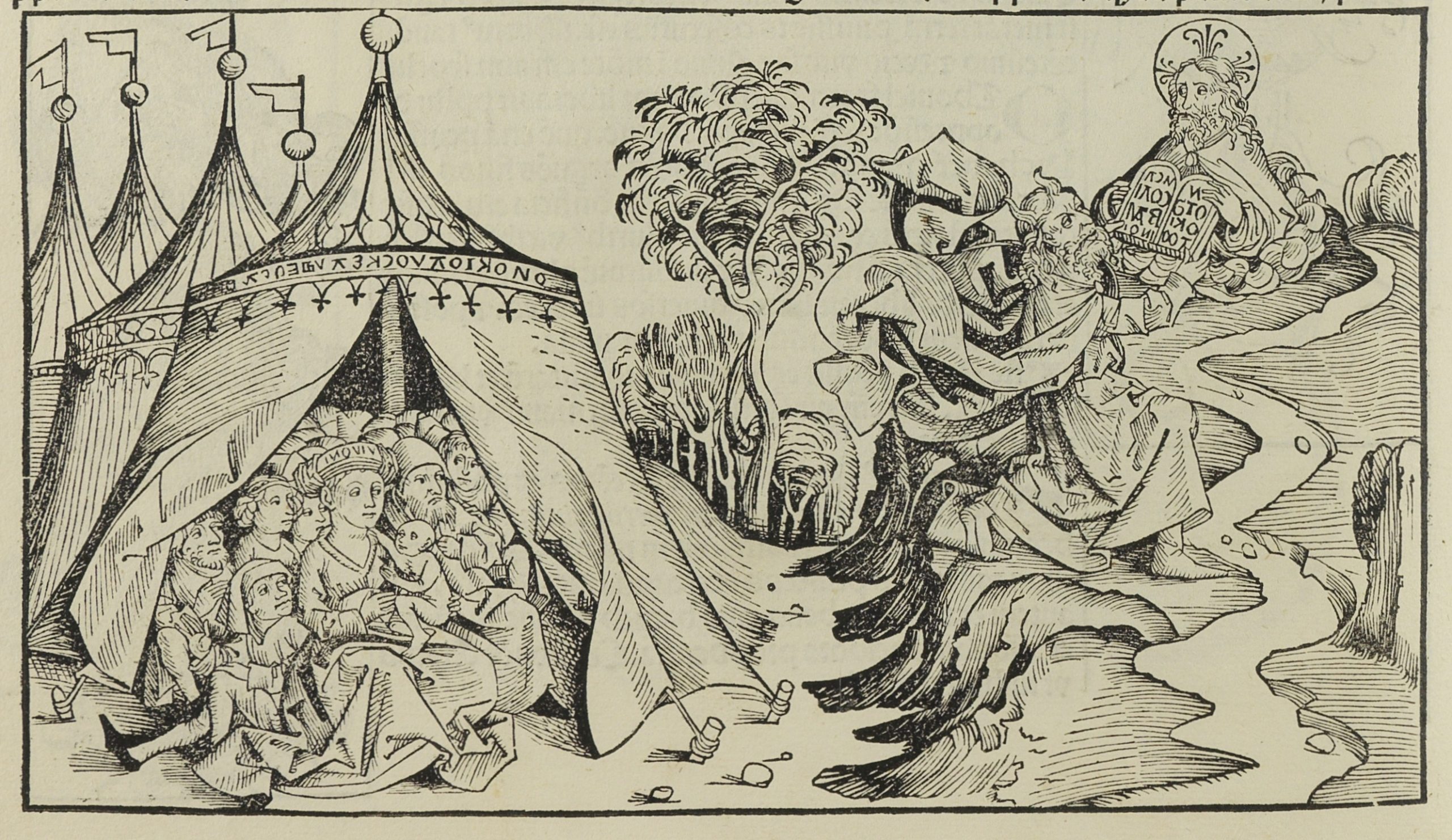 Page 114 of Liber chronicarum, Nuremberg, 1493. From the National Library of Israel collection. Click image to enlarge

This one, which appeared in a work edited by an 18th century Jesuit missionary, features a crucified Jesus right next to Moses on Mt. Sinai! Also, check out the stairs going up the mountain. Eighty-year-old Moses surely would have appreciated those, even if they do kind of look like an MC Escher creation… 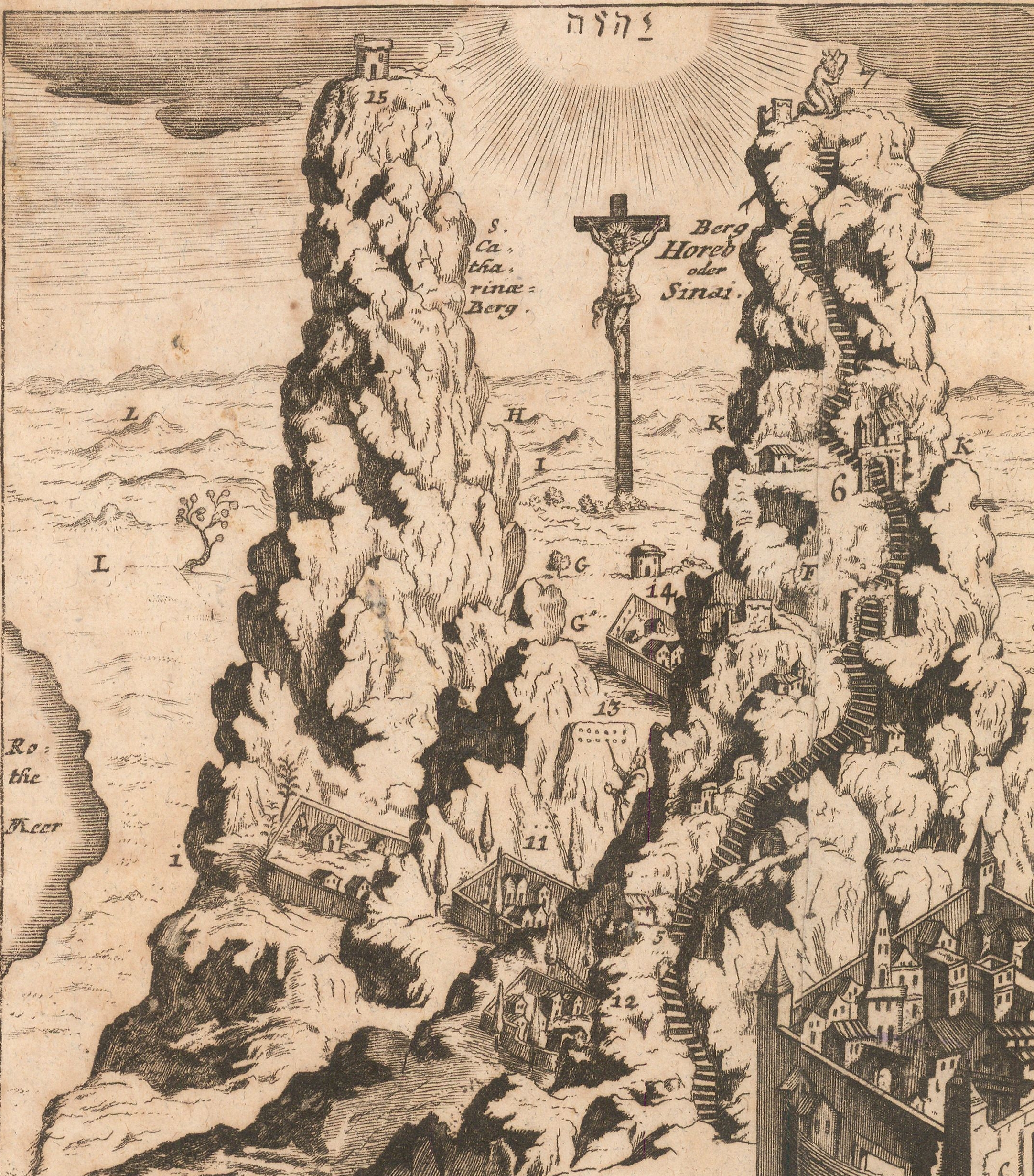 A similar one, printed in Russia in 1821, shows Moses literally being handed the Ten Commandments: 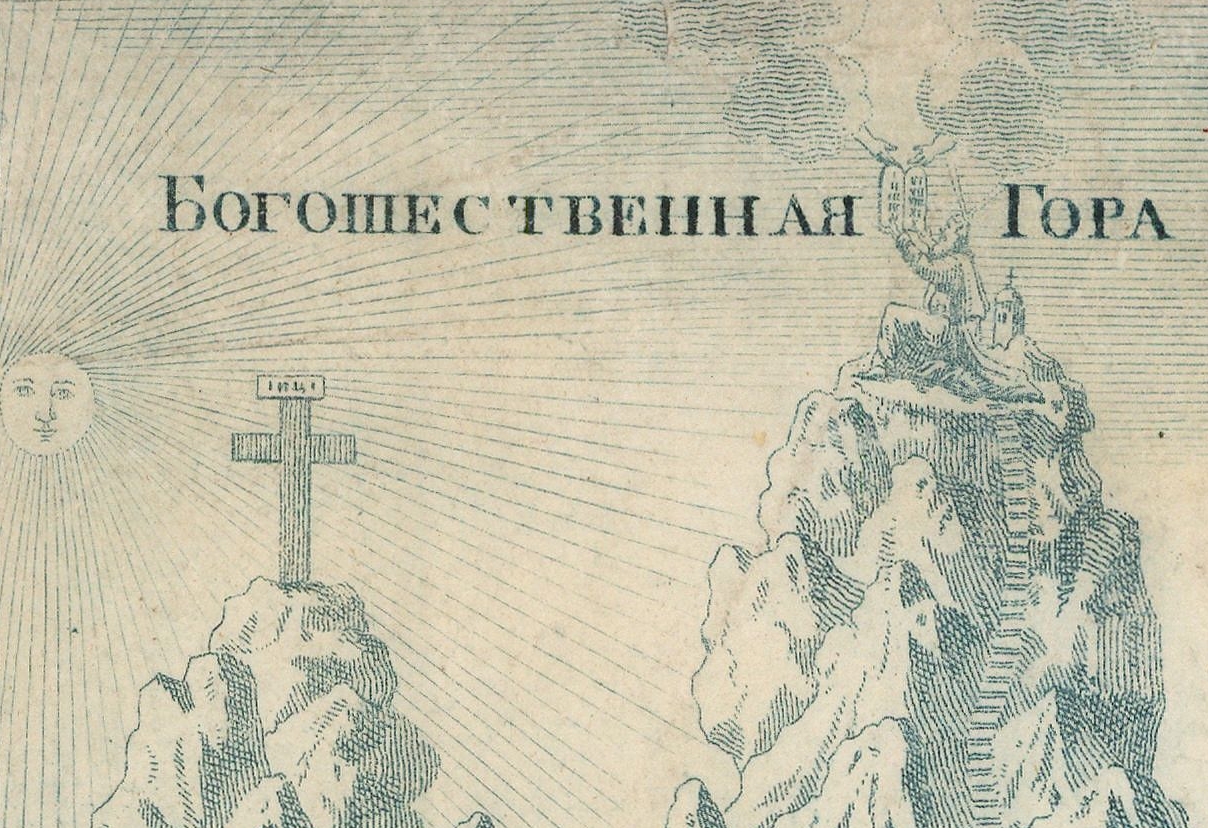 “A view representing Mount Sinai, all the wonderful and ancient places lying in Jerusalem and in the vicinity of Onago…”, St. Petersburg, 1821. From the Eran Laor Cartographic Collection at the National Library of Israel. Click image to enlarge

No hands of God in the next one, printed in 16th century Venice, though Moses does get horns (as opposed to rays of lights protruding from his head), and a nice cottage! 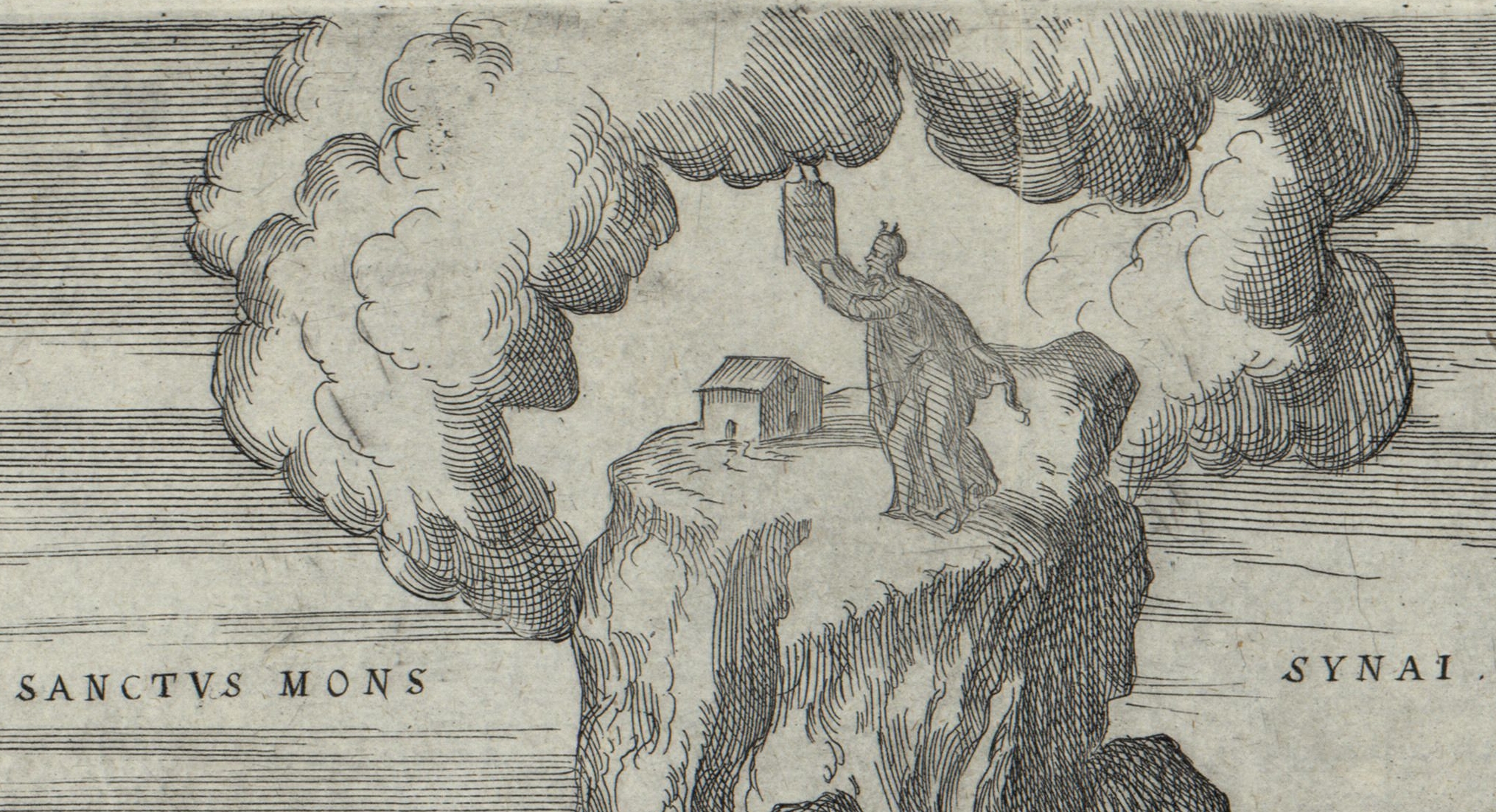 Moses receiving the Law on a Latin map printed in Venice, 1569. From the Eran Laor Cartographic Collection at the National Library of Israel. Click image to enlarge

Moses on Mt. Sinai features in countless Christian maps, sometimes appearing as a geographical location within the map and sometimes as more of an artistic accent somewhere outside the boundaries of the map itself.

Here are a few examples, many of them featuring identical or very similar images alongside texts that have been translated into different languages.

Click on the link in each caption to see the full map and see if you can find Moses in the original! 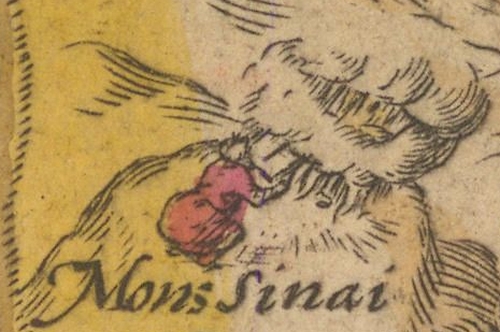 Map appearing in a Dutch Bible, ca. 1600. From the Eran Laor Cartographic Collection at the National Library of Israel 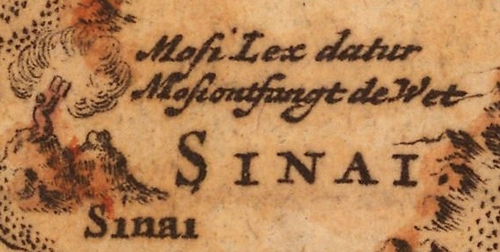 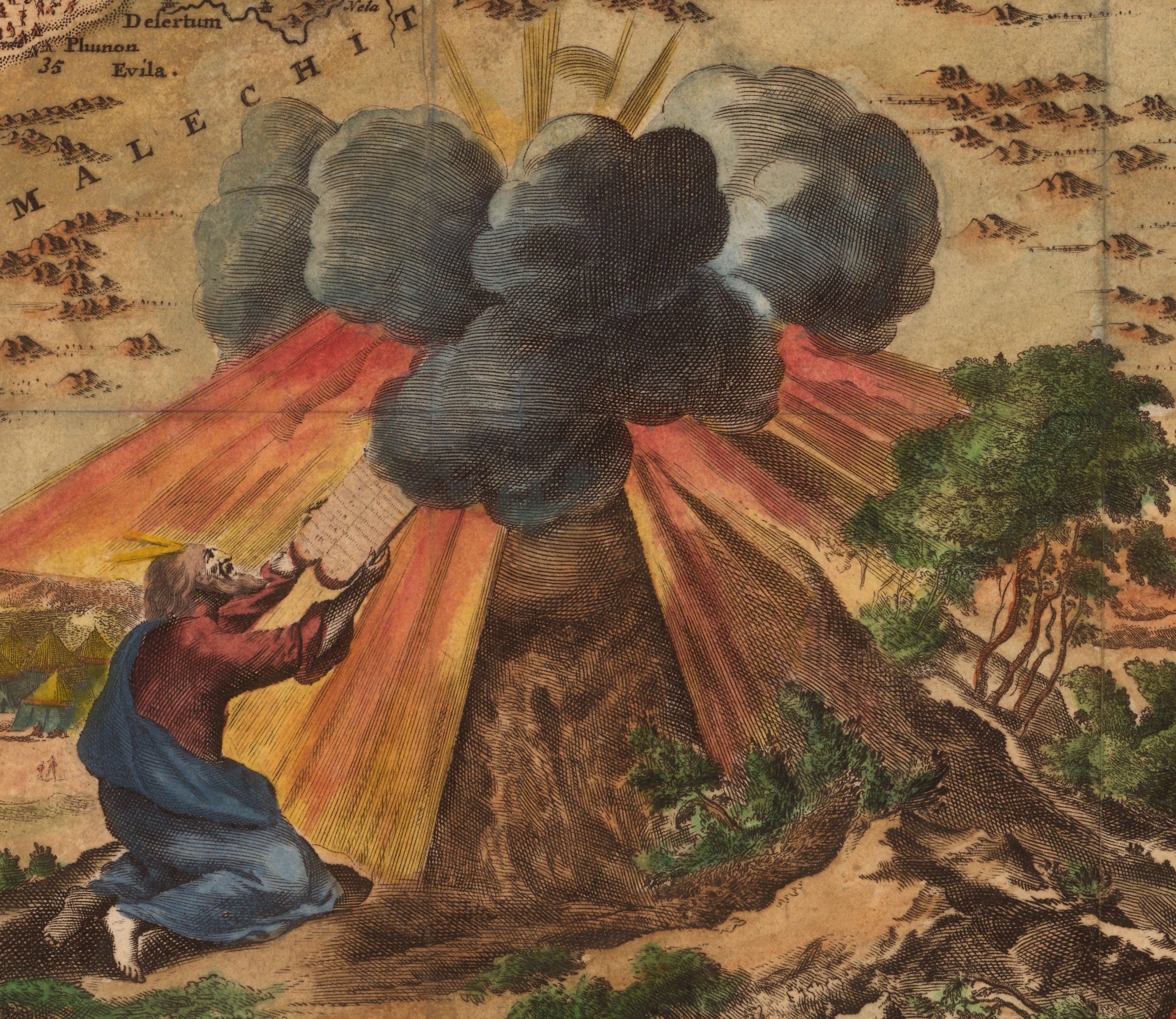 Images of Moses and Mt. Sinai on a map printed in Amsterdam, 1677. From the Amir Cahanovitc Collection, National Library of Israel Digital Collection. Click images to enlarge

Moses receiving the Law on a French map printed in Amsterdam, 1704. From the Amir Cahanovitc Collection, National Library of Israel Digital Collection

Moses receiving the Law on a German map printed in The Netherlands, 1716. From the Amir Cahanovitc Collection, National Library of Israel Digital Collection

And now for some Jewish renditions…

Here are the Ten Commandments appearing on Mt. Sinai. Notice that Moses does not appear, perhaps due to the religious sentiments of the Jewish cartographer or his intended clientele. 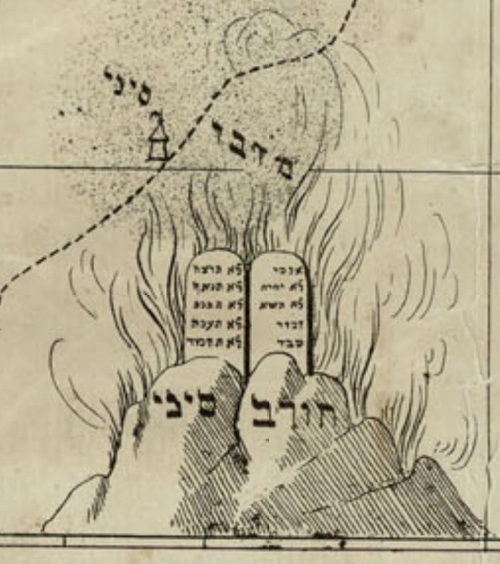 “Map of the Holy Land and its boundaries” by Joseph Schwarz, Wuerzburg, 1829. From the Eran Laor Cartographic Collection at the National Library of Israel

Though there are some Jewish maps, such as the one by Joseph Schwarz appearing above, Haggadot are, of course, a much more common place to find Jewish art, and — in our case — depictions of Moses on Mt. Sinai.

This depiction, which includes a fence around Mt. Sinai as mentioned in the text, has an almost shtetl-like vibe to it, no? 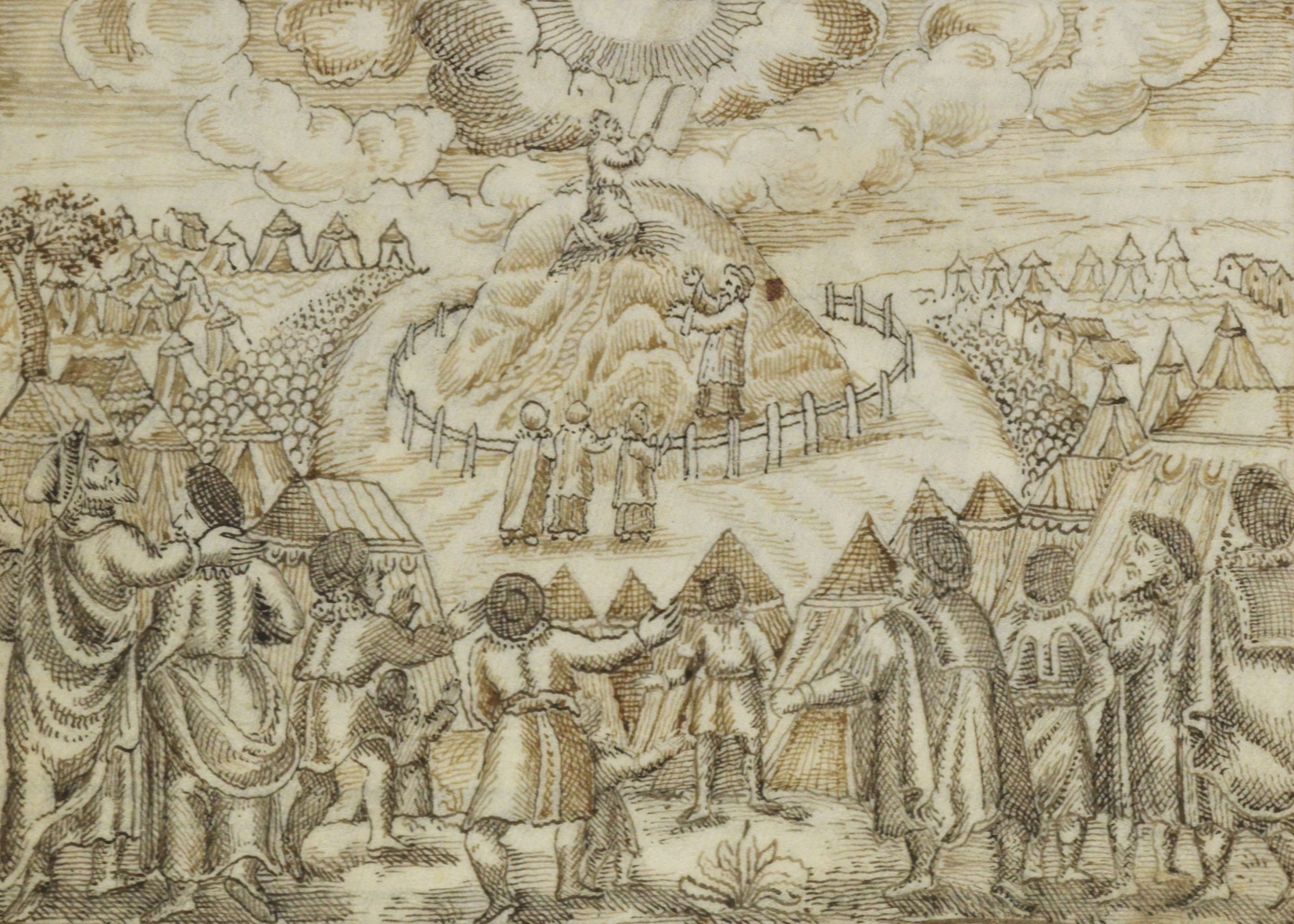 Depiction of the scene by renowned scribe and illuminator Meshullam Zimmel ben Moshe of Polna (Bohemia) appearing in a Haggadah produced in Vienna, 1719. From the National Library of Israel Collection. Click image to enlarge

A similar scene, with Moses apparently engulfed by clouds, appears in a different illustrated Haggadah produced a few years later by another renowned Jewish artist, Joseph ben David of Leipnik. It is likely that both of these images (as well as the last one featured in this article) were inspired by the 1695 printed Amsterdam Haggadah. 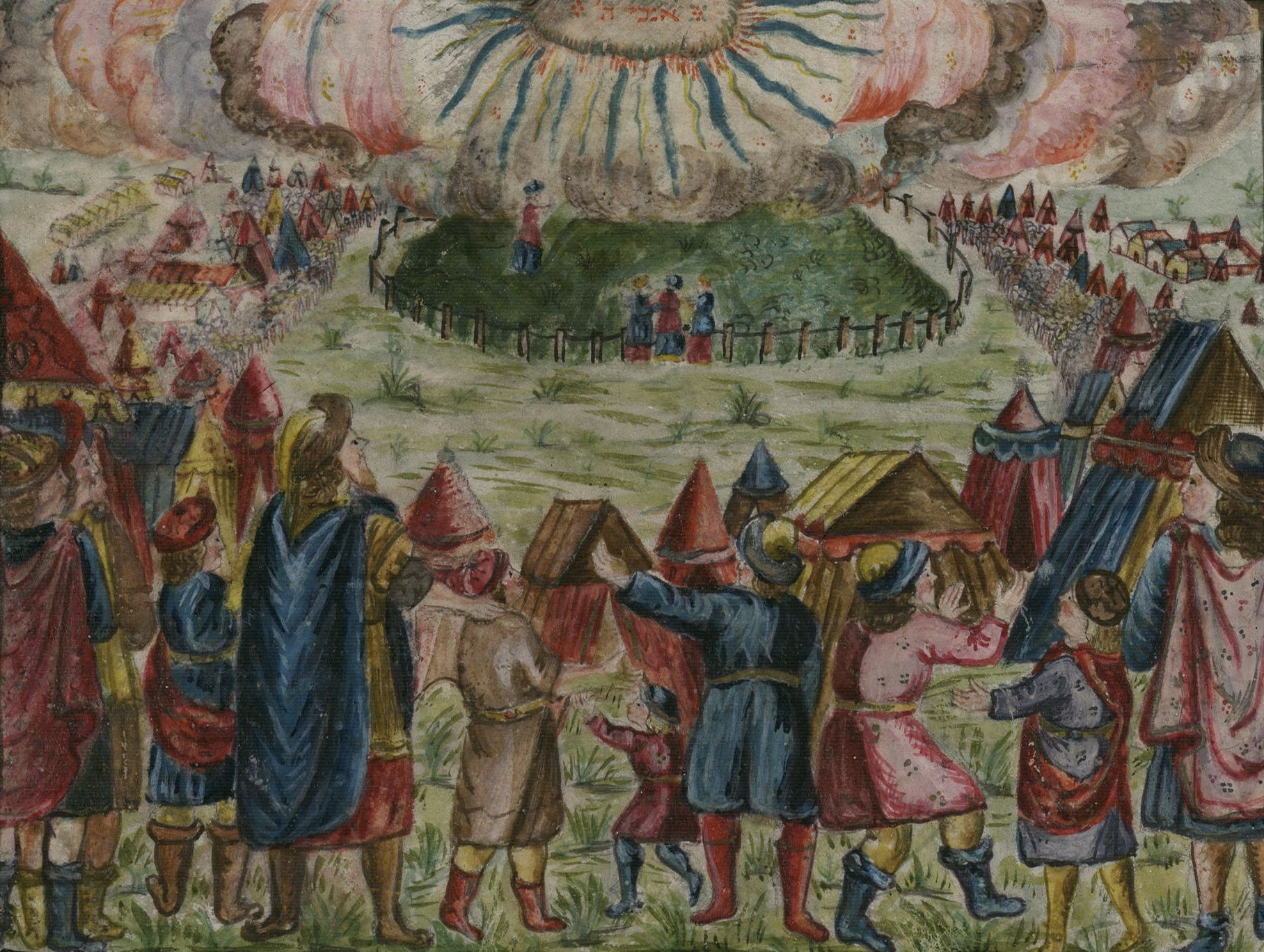 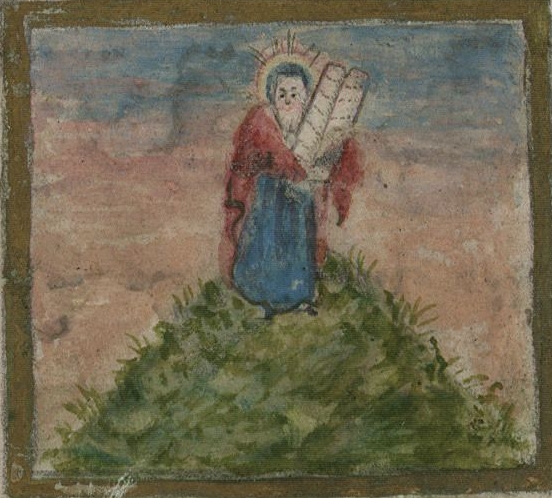 Depictions of Moses and Mt. Sinai by Joseph ben David of Leipnik, appearing in a Haggadah produced in Darmstadt, 1733. From the National Library of Israel Collection

From afar it looks like a similar scene and a decent enough rendition of Moses and the Giving of the Torah on Mt. Sinai. 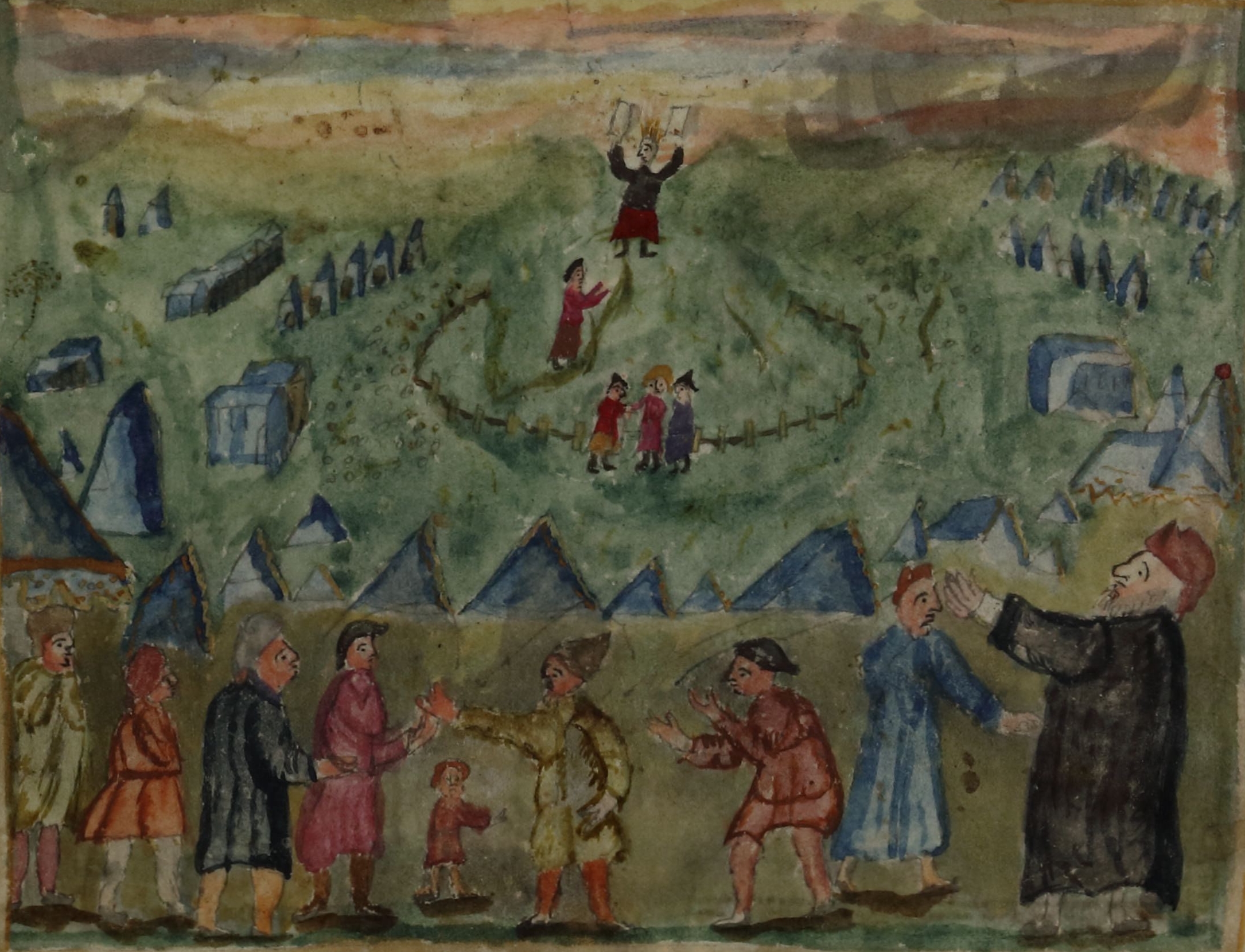 Haggadah, Amsterdam, 1769. From the National Library of Israel collection

Yet as you look closer… something seems a bit off… 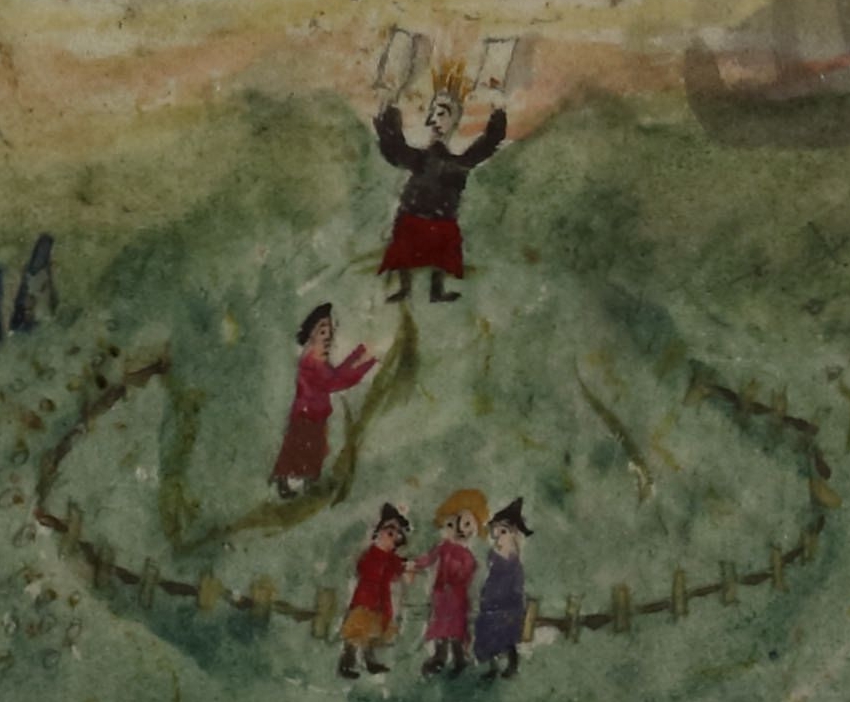 With all due respect to children, this illustration appearing in a priceless centuries-old Hebrew manuscript looks like… well… a second grade arts-and-crafts project? 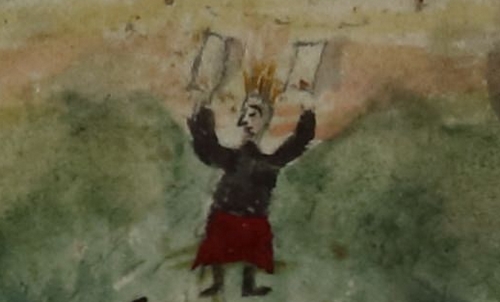 Maybe even a self-portrait of an enraged elementary school student tearing up his homework?

Could something have gone wrong along the way?

The artist’s own child stepped in when Dad wasn’t looking?

An attempt at “post-modern” before there was even “modern”?

We will never know, though maybe – like the sounds at Mt. Sinai, any good work of art and every Jewish text – we are all meant to see and appreciate this particular “revelation” at Mt. Sinai in our own way.