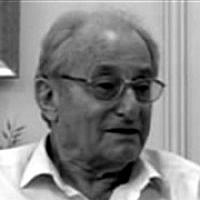 The Blogs
Yitzhak Shadmon
Apply for a Blog
Please note that the posts on The Blogs are contributed by third parties. The opinions, facts and any media content in them are presented solely by the authors, and neither The Times of Israel nor its partners assume any responsibility for them. Please contact us in case of abuse. In case of abuse,
Report this post.

In November, Marton Gyongyosi, a deputy of the Hungarian far-right Jobbik party, said in Parliament that “the current Israeli-Palestinian conflict was a timely opportunity to assess ‘how many people of Jewish origin there are who represent a certain national security risk for Hungary.’”

Márton Gyöngyösi, you made it into the headlines for half a day. Your country learned your name and unfortunately so did the world after you called for drawing up a list of the Jews. You are troubled by the Jews! The next day you sneaked back into the media by you correcting your suggestion, saying you meant only Hungarian members of Parliament who also hold Israeli citizenship. You are troubled by Israel too!

As an Israeli Hungarian Jew, who happens to be from the town of Gyöngyös, I cannot let your shameful suggestion pass unchallenged.

Márton Gyöngyösi, I was there when people like you, belonging to the Arrow Cross party, drew up a list of every Jew! What came next was the ghetto. I was thrown out of school. Decrees and laws were passed. My mother sewed yellow stars on all our clothes. On Saturday 13, May 1944, we were shepherded into the ghetto of Gyöngyös. People like you lined up on the sides of the street clapping their hands to our march. I well remember the date because that was the day my bar mitzvah was supposed to be held. At age 13, instead of transitioning from childhood into adolescence, I was suddenly thrust into adulthood.

There had been a flourishing Jewish life in Gyöngyös. There were Jewish sport clubs, a mutual aid society, a women’s association, a heder religious school. Most of us kept kosher, observed the holidays, took the cholent to the bakery on Friday. Shabbat was the most beautiful day in Gyöngyös. My name then was Ottó Seidner.

Do you know the difference between a Jew and a non-Jew? We didn’t either! Because in Gyöngyös, it was not important who was Jewish and who was not. For example, Gyuszi Rétsági was not a Jew. He sat next to me in grade school. He became a football player. I was involved in sports in my childhood as well. I trained in Judo and football at the Athletics Club of Gyöngyös (the GYAK). Later, I was not allowed to play football at GYAK, because all of a sudden it became important who was a Jew and who was not! So a Jewish sport club was established, called the Commercial Sport Association of Gyöngyös. I could not enter high school because of the Act prohibiting Jews entering universities, the so called Numerus Clausus restricting the number of Jews to three in every year of school. I wasn’t among the first three approved. I was number four. So I had to repeat my last year in the elementary school.

On May 13, the gendarme with their rooster feathers on their hats deported us Jews to the ghetto. From there they sent us to work at the sugar factory in Hatvan, a nearby city. And from there I was pushed, together with 82 other people, onto a train car. We traveled for five days, from June 11-15, and the doors were never opened at a single station, though four people died. Their dead bodies travelled with us all the way to the end. Along with another 35 cars, we made our way to Auschwitz. The elderly and the women of Gyöngyös were sent directly to the gas chambers. I managed to escape from the death march. I was the only one member of my family who survived that hell. The way back to Gyöngyös on foot was arduous. New tenants occupied our house, rearranging our home according to their taste. With our furniture. It wasn’t only our home. It was all the Jews’ homes: they emptied the houses, took their belongings.

Today, not a single Jew lives in Gyöngyös. The synagogue became a liquor store. Ten of us Gyöngyös survivors made it to Israel. Today I am the only one left. Every month I tell the story of my survival to soldiers visiting Yad Vashem, the Holocaust Memorial. I give them my past so that they will have a future. I go to Auschwitz with them too, to face the past in order to live the present in order to do something for the sake of the future. This is how the world functions.

You too can do something for the sake of the future, Márton Gyöngyösi. You can have a “More Beautiful Future,” as your party slogan proclaims. Go to Gyöngyös, Márton Gyöngyösi, and see what is written on the marble memorial plaque hanging on the wall of the great church. There, you’ll see the names of some 400 World War II victims engraved. At the end of the list, just at the bottom, you’ll find a note: “and 1,835 Jewish victims.”

Márton Gyöngyösi, if you really want to draw up a list of Jews, go find out the names of those 1,835 Jews who are not listed on that marble plaque there in Gyöngyös.

If you do this, the future will not be darker. Instead the past will be more illuminated.

About the Author
Yitzhak Shadmon was born in Hungary in 1931. At the age of 13, he was sent to Auschwitz along with all the Jews of his town. He was the only member of his family to survive. He moved to Israel, raised a family and ran an agricultural business. Today, in retirement, he continues to bear witness in order to teach the next generation about the experience of Jews during the Holocaust.
Comments