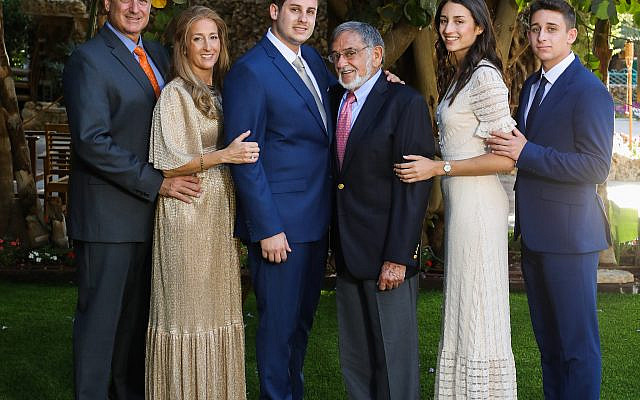 Dreizel's family: Deborah (second from left) and Rivka (second from right) and Deborah's father at a previous family celebration.

I don’t know the day, or even the month that my grandmother left Poland to come to Israel.  It was 1933.  Unlike my making Aliyah with a quick drive over the George Washington Bridge on a bus we chartered to take us along with a few other families, and a lot of luggage, to board our flight from JFK airport, my grandmother’s journey probably began on a horse drawn vehicle of some sort until she got to a place where she could take a train to another transit point, and then a ship for days on the Mediterranean.  She surely never brought with her the volume of things from her Polish town that we did from our suburban home.

While sad leaving our family (and thus the instruction that none were to send us off at the airport), we were able to maintain our US phone number, emails, and use other early forms of video chats to stay in touch with our loved ones in the old country with relative ease.  My grandmother’s marriage and Aliyah were certainly joyous milestones to celebrate. Yet probably with mixed feelings. While she didn’t know it then, it would be the last time my grandmother would see all but one sister who she left behind. She surely never had any expectation of being able to stay in touch with her parents, siblings and nieces and nephews with more than an occasional letter.

Israel has all but shut its borders again, making it difficult to impossible for Israelis with business or personal affairs to leave to go to many countries including the US, Canada, the UK and others where many olim still have relatives (forget friends), and business. Yet it’s even harder for non-Israelis to come to Israel, for almost any reason. Some who are able to get permission, along with Israelis returning from “red countries,” will be required to quarantine for a week.

I’ve been thinking about this for a while.  It impacts me directly.  Of course, I’d love for my relatives to be able to come here, see us, and meet the newest grandson born during the pandemic. Now, the way things are looking, they might not make it until after the next grandchild is born. I’m missing lots of business by not traveling. Each time I think I’ll be able to schedule a trip, some new closure or fear of such pops up.  It’s maddening, and deeply frustrating.

But I have reminded myself and counseled others that as much as it’s bad, and very inconvenient, it’s not as bad as the 1930s when my grandparents came to Israel, not able to just hop on a plane and go visit for a family celebration.  They couldn’t have imagined any of the wide range of video options we have to bridge the distances.  They simply left and wrote letters, until the letters stopped coming back.

My grandmother was especially close to her mother, Dreizel.  Dreizel and her husband, Shalom Yaakov, along with their children and grandchildren, were rounded up by the Nazis in August 1942, and shot to death inside massive graves that they had dug themselves outside Kanczuga, the town in which our family had lived for generations.  It’s a too familiar Holocaust story.  I heard stories about Dreizel from my grandmother and her sister growing up.  As a young adult, I met a man who credited Dreizel for saving his life and the Jews in their town were being rounded up.

When it came to looking for names of deceased relatives to name for as our family grew, while we’d never be so inconsiderate to name a child Dreizel, one of my daughters does carry a modern adaptation of that name.  So does my cousin, Deborah.

My Israeli born father never met his grandmother.  Deborah’s mother was Dreizel’s niece.  Dreizel should be dancing in heaven to see how these two women have carried her name and memory forward, and are each living in Israel. Knowing what I know about Dreizel, little would have made her happier, other than perhaps not being murdered by the Nazis and having the privilege of living to a ripe old age watching her children raise their children.

Now, Deborah’s daughter, Rivka, is set to get married the first week of January.  Until a few weeks ago it seemed that Deborah’s siblings and father would be able to come to Israel to celebrate.  That all came crashing down when Israel closed its borders most recently.  People are lobbying for exceptions to the closure to allow at least first-degree relatives to be able to celebrate joyous occasions that we have the privilege to do, and which are anchors of happiness that pull us through the pandemic’s hard times.

I went to visit Deborah’s family the other day.  Rivka joked that she was thinking of putting on her wedding dress and staging a one woman protest in front of the Prime Minister’s house with a sign that said, “PM Bennett, please let my grandfather come to my wedding.”  Cynically, we all agreed that if it were the Prime Minister’s family, or that of another government leader, exceptions would be found.

There can still be nothing like leaving one’s family and not knowing when, or if, one will ever see them again, and not having the benefit of technology to bridge the distance.  However, knowing what I know about my great grandmother, it would pain her that all her relatives couldn’t be together to celebrate one of her descendant’s weddings, and that we couldn’t find a way to overcome the challenges in that.  In the scheme of things, considering what she lived through and died as a result of were far more matters of life and death. Nevertheless, its not the 1930s. We never made Aliyah thinking that it would be so hard to see our loved ones, or to earn a living. It’s not the 1930s. Families who have the ability should be able to celebrate together.

Mr. Prime Minister, it would make my great grandmother Dreizel and all of us very happy if you could work things out.