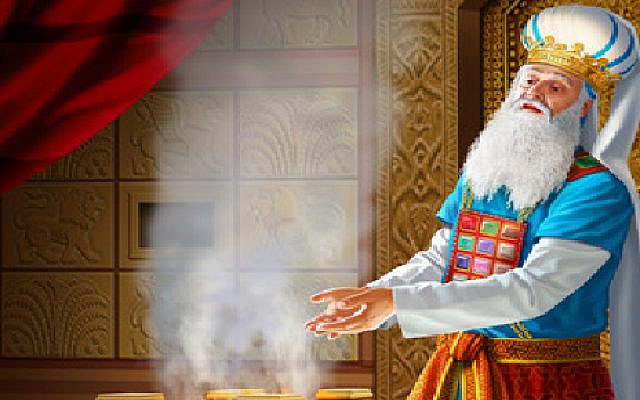 Tetzaveh, with its elaborate description of the “sacred vestments” which the Priests and the High Priest wore “for glory and for splendour,” seems to run counter to some fundamental values of Judaism.

The vestments were made to be seen. They were intended to impress the eye. But Judaism is a religion of the ear more than the eye. It emphasises hearing rather than seeing. Its key word is Shema, meaning: to hear, listen, understand and obey. The verb sh-m-a is a dominant theme of the book of Devarim, where it appears no less than 92 times. Jewish spirituality is about listening more than looking. That is the deep reason why we cover our eyes when saying Shema Yisrael. We shut out the world of sight and focus on the world of sound: of words, communication and meaning.

The reason this is so has to do with the Torah’s battle against idolatry. Others saw gods in the sun, the stars, the river, the sea, the rain, the storm, the animal kingdom and the earth. They made visual representations of these things. Judaism disavows this whole mindset.

God is not in nature but beyond it. He created it and He transcends it. Psalm 8 says: “When I consider Your heavens, the work of your fingers, the moon and the stars which You have set in place: what is man that You are mindful of him, the son of man that You care for him?” The vastness of space is for the psalmist no more than “the work of your fingers.” Nature is God’s work, but not itself God. God cannot be seen.

Instead, He reveals Himself primarily in words. At Mount Sinai, said Moshe, “The Lord spoke to you out of the fire. You heard the sound of words but saw no form; there was only a voice” (Deut. 4:12). Elijah, in his great experience on the mountain, discovered that God was not in the wind, the earthquake or the fire, but in the kol demamah dakah, the “still small voice.”

Clearly, the Mishkan (the Tabernacle), and later the Mikdash (the Temple), were exceptions to this. Their emphasis was on the visual, and a key example is the Priests’ and High Priest’s sacred vestments, bigdei kodesh.

This is very unexpected. The Hebrew for “garment,” b-g-d, also means “betrayal,” as in the confession we say on penitential days: Ashamnu bagadnu, “We have been guilty, we have betrayed.” Throughout Genesis, whenever a garment is a key element in the story, it involves some deception or betrayal.

There were the coverings of fig leaves Adam and Eve made for themselves after eating the forbidden fruit. Jacob wore Esau’s clothes when he took his blessing by deceit. Tamar wore the clothes of a prostitute to deceive Judah into lying with her. The brothers used Joseph’s bloodstained cloak to deceive their father into thinking he had been killed by a wild animal. Potiphar’s wife used the cloak Joseph had left behind as evidence for her false claim that he had tried to rape her. Joseph himself took advantage of his Viceroy’s clothing to conceal his identity from his brothers when they came to Egypt to buy food. So it is exceptionally unusual that the Torah should now concern itself in a positive way with clothes, garments, vestments.

Clothes have to do with surface, not depth; with the outward, not the inward; with appearance rather than reality. All the more strange, therefore, that they should form a key element of the service of the Priests, given the fact that “People look at the outward appearance, but the Lord looks at the heart” (1 Sam. 16:7).

Equally odd is the fact that for the first time we encounter the concept of a uniform, that is, a standardised form of dress worn not because of the individual wearing them but because of the office he holds, as Cohen or Cohen Gadol. In general, Judaism focuses on the person, not the office. Specifically, there was no such thing as a uniform for Prophets.

Tetzaveh is also the first time we encounter the phrase “for glory and for splendour,” describing the effect and point of the garments. Until now kavod, “glory,” has been spoken of in relation to God alone. Now human beings are to share some of the same glory.

Our parsha is also the first time the word tiferet appears. The word has the sense of splendour and magnificence, but it also means beauty. It introduces a dimension we have not encountered explicitly in the Torah before: the aesthetic. We have encountered moral beauty, for instance Rivka’s kindness to Avraham’s servant at the well. We have encountered physical beauty: Sarah, Rivka and Rachel are all described as beautiful. But the Sanctuary and its service bring us for the first time to the aesthetic beauty of craftsmanship and the visual.

This is a continuing theme in relation to the Tabernacle and later the Temple. We find it already in the story of the binding of Yitzchak on Mount Moriah which would later become the site of the Temple: “Avraham named the place ‘God will see.’ That is why it is said today, ‘On God’s mountain, He will be seen’” (Gen. 22:14). The emphasis on the visual is unmistakable. The Temple would be about seeing and being seen.

Likewise, a well-known poetical prayer on Yom Kippur speaks about Mareih Cohen, “the appearance of the High Priest” as he officiated in the Temple on the holiest of days:

Like a rose in the heart of a lovely garden…

Like a room hung with sky blue and royal purple…

Like the appearance of Orion and Pleiades, seen in the south…

These lead to the refrain, “How fortunate was the eye that beheld all this.” Why was it that specifically in relation to the Tabernacle and Temple, the visual prevailed?

The answer is deeply connected to the Golden Calf. What that sin showed is that the people could not fully relate to a God who gave them no permanent and visible sign of His presence and who could only be communicated with by the greatest of Prophets. The Torah was given to ordinary human beings, not angels or unique individuals like Moshe. It is hard to believe in a God of everywhere-in-general-but-nowhere-in-particular. It is hard to sustain a relationship with God who is only evident in miracles and unique events but not in everyday life. It is hard to relate to God when He only manifests Himself as overwhelming power.

So the Mishkan became the visible sign of God’s continual presence in the midst of the people. Those who officiated there did so not because of their personal greatness, like Moshe, but because of birth and office, signalled by their vestments. The Mishkan represents acknowledgement of the fact that human spirituality is about emotions, not just intellect; the heart, not just the mind. Hence aesthetics and the visual as a way of inculcating feelings of awe. This is how Maimonides puts it in The Guide for the Perplexed:

In order to raise the estimation of the Temple, those who ministered therein received great honour; and the Priests and Levites were therefore distinguished from the rest. It was commanded that the Priests should be clothed properly with beautiful and good garments, “holy garments for glory and for splendour” (Ex. xxviii. 2) … The Temple was to be held in great reverence by all. (Guide, Book III, ch. 44)

The vestments of the officiants and the Sanctuary/Temple itself were to have the glory and splendour that induced awe, rather as Rainer Maria Rilke put it in the Duino Elegies: “ For beauty is nothing but the beginning of terror, which we still are just able to endure.” The purpose of the emphasis on the visual elements of the Mishkan, and the grand vestments of those who ministered there, was to create an atmosphere of reverence because they pointed to a beauty and splendour beyond themselves, namely God Himself.

Maimonides understood the emotive power of the visual. In his Eight Chapters, the prelude to his commentary on tractate Avot, he says, “The soul needs to rest and to do what relaxes the senses, such as looking at beautiful decorations and objects, so that weariness be removed from it.” Art and architecture can lift depression and energise the senses.

His focus on the visual allows Maimonides to explain an otherwise hard-to-understand law, namely that a Cohen with a physical blemish may not officiate in the Temple. This goes against the general principle that Rachmana liba ba’i, “God wants the heart,” the inner spirit. The exclusion, says Maimonides, has nothing to do with the nature of prayer or Divine service but rather with popular attitudes. “The multitude does not estimate man by his true form,” he writes, and instead judges by appearances. This may be wrong but it was a fact that could not be ignored in the Sanctuary whose entire purpose was to bring the experience of God down to earth in a physical structure with regular routines performed by ordinary human beings. Its purpose was to make people sense the invisible Divine presence in visible phenomena.

Thus there is a place for aesthetics and the visual in the life of the spirit. In modern times, Rav Kook in particular looked forward to a renewal of Jewish art in the reborn land of Israel. He himself, as I have written elsewhere, loved Rembrandt’s paintings, and said that they represented the light of the first day of creation. He was also supportive, if guardedly so, of the Bezalel Academy of Art, one of the first signs of this renewal.

Hiddur mitzvah – bringing beauty to the fulfilment of a command – goes all the way back to the Mishkan. The great difference between ancient Israel and ancient Greece is that the Greeks believed in the holiness of beauty whereas Judaism spoke of hadrat kodesh, the beauty of holiness.

I believe that beauty has power, and in Judaism it has always had a spiritual purpose: to make us aware of the universe as a work of art, testifying to the supreme Artist, God Himself.

Morality: Restoring the Common Good in Divided Times by Rabbi Jonathan Sacks will be published in the UK on 12th March 2020.