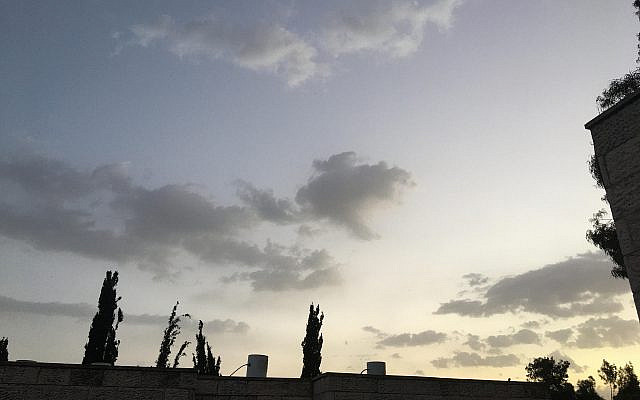 Bursts of bird calls rock my morning. One by one they gather, toning in twos, threes and small choir calls. At a lone tree top a large crow signals that he alone leads; he moves from tree top to tree top crying out a declaration of intent. His is the horn that blares, hearkens , awakes and warns. The utter simplicity blends with the treed surroundings with only an occasional passing car disturbing the peace and calm of the morning. This must be God’s healing call, his early morning blues. In the distance the full moon is simply one of the elements; it takes a back seat to the undulating symphony of surprises. All this is nature’s balm, for as we sicken, we also heal. Mornings in Jerusalem do this. Even when the choir fades in the distance, when the voices recede toward sound’s horizon, they bow out like the end of a Bach invention, in two measures of a humility and reverence. All the rest is mambo jumbo. This scene is primordial, everlasting and self-generating.

I am again touched, this time through cool morning breezes; the morning’s light baths my aching heart, finally allowing me to live and love.

The bird choir’s’ symmetry is uncanny, an endless conversation of sound colors: mauve, turquoise, apple green, cherry red, plum purple with deep magenta tones circulating in the cool morning air, like one gigantic unified kaleidoscope. Nothing more than these blessed colors are necessary for our recovery; nothing more than this healthy balm is really needed, like a slow shift of a rudder. The night ship sails into the distance while flows of cool crisp morning air awaken our senses, healing our wounds, sadness and solitude.

The birds are determined, but not aggressive. They sing on relentlessly. I stand motionless, breathing in their beauty, calm and unpredictability. The senses awaken in me, the lone witness of this morning’s minyan, filled with gentle cries, seemingly random, but surely not. Like a ripe gigantic tangerine, I peel them, layer by layer, piece by piece. I shape them, caress them, and marvel in their ego-less simplicity. Healing time has arrived. I am grateful.

I pray in a quiet voice as they did long ago, immediately after the fall of the Second Temple. Many say that at that painful time, prayer was spontaneous (*see footnote below). People prayed in small enclaves. They prayed from their heart, together but separately. The words were often spontaneous, improvised and heart-felt. This was spontaneous prayer’s epoch, before those scholars and rabbis, who, in all their empirical wisdom, codified the texts so rather than spontaneous heart-felt cacophony, a text canon emerged, sculpted in granite, shared by all. This was so different from nature’s example, where every day chimes differently. The endless varieties of bird songs are a reminder not only of our individual uniqueness “b’tzelem Elokim” but also our collective capacity for infinite variety and commune. This blessing is one of our greatest gifts. Codifications of wisdom through canon may have sought to unify us, but at what cost? In many circles, codification led to stagnation, hardness of heart and chronic blindness to the magnificent revolving stage around, above and beneath us.

The kaleidoscope and nature’s capacity for infinite variety is the echo of divine wisdom, on display every day through sound, sight, taste and touch. It expands and contracts, inviting us to pray in a spontaneous manner; it is a flowing celebration of songs and whispers.

And so, as this morning’s minyan winds down, the sun slowly rises, with light’s early summer ether warming the scene. I ask myself: “Are we, in fact, all apprentices in God’s mysterious ways, the daily revealing of endless possibilities of variation, dimension and rotation? Is this God’s own spontaneous prayer, hearkening us to join in delicate harmony, ego-less, timeless and primordial. Is it the balm that heals and calms? Is it ultimately the essences of being human, in the shadow of the divine?”

*Footnote: paragraph 5, second line: “At that time prayer was spontaneous”. Recommended reading on the subject: Biblical Prose Prayer (As a Window to the Popular Religion in Ancient Israel), by Moshe Greenberg, University of California Press: Berkeley, 1983. Especially recommended: Lecture 3 (Spontaneity vs. prescription in prayer; the validity of the evidence; lines of further inquiry; implications for the “higher” religion of the Hebrew Scriptures).