Ah, the life of an immigrant!

Long lines in this bureaucratic office, then that.

The fisheye from the supermarket checker who hears your accent.

Counting the days left on your visa.

That queasy moment at passport control.

I’ve spent most of my adult life as an immigrant. I’ve survived paper avalanches in France, Italy and, most significantly, in Poland, where I have lived for years as a Dominican friar.

(The Polish bureaucracy was the template, I think, for the Israeli. That gives you some idea.)

I spent three years in Switzerland, with its famously sticky procedures for non-Europeans. I’m applying for a new visa this month, so my immigrant identity is on my mind.

Back in the prosaic Midwest of the United States, on my home ground, nobody gets it. The last immigrants in my family arrived in Wisconsin in the 1870s. Folks have stayed there ever since. I talk about the thrill and the anxiety and the odd in-between-ness and I see only blankness and befuddlement.

And so I turn to the Jews.

Paul Johnson, a Catholic historian not loved by all, wrote in the 1980s of the first waves of European emigration in the 17th century. Of all groups, he says, the Jews were most gifted in the “immigrant arts.”

Above all, they were expert settlers. They had been moving all their history. Strangers and sojourners from their earliest origins, they had, over many generations and in an endless variety of different situations, perfected many immigrant arts….

He quotes Menasseh ben Israel, a Jewish apologist of the mid-17th century,

Hence it may be seen that God hath not left us; for if one persecutes us, another receives us civilly and courteously; and if this prince treats us ill, another treats us well; if one banisheth us out of his country, another invites us with a thousand privileges; as divers princes of Italy have done, the most eminent King of Denmark, and the mighty Duke of Savoy and Nissa. And do we not see that those Republiques do flourish and much increase in trade who admit the Israelites?

The long Jewish history of emigration and immigration, flex and pull, is of course expressed in Jewish art.

And mostly, in Jewish sources, the immigrant is ridiculous.

Think of big aunt Bertha, the Galician immigrant, dragging little David Schearl through the Metropolitan Museum in Call it Sleep. 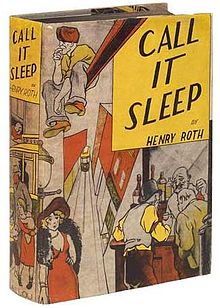 The first-edition cover of Henry Roth’s “Call it Sleep” (1934). Wikipedia

Think of the Iraqi and Bulgarian and Polish Israelis in the fez and the tembel hat and the wild blond curls, singing “Kulanu yehudim” in the Seventies film by Menahem Golan.

Think of the egregious Hebrew of the twanging American neighbor in Ushpizin (האושפיזין) as she wangles a marked-down mitpachat from the poor haredi heroine. (The language of Patriarchs as rendered by Olive Oyl.)

One of the first Jewish immigrants whose song I learned was the Grine Kuzine (greenhorn cousin) in the New York Yiddish song from 1921.

(The Barry Sisters did it, too.)

The immigrant starts out in the bloom of youth with cheeks like rosy oranges and feet “begging to dance.” In some versions of the song, she gets a job in a hat shop. In others, she marries the neighbor. In any case, she ends a ruin, her cheeks not rosy but green (as she was).

The song ends with this kicker:

Now when I meet my cousin, And I ask her: How’s it going, Greenie? She answers me with a scowl, “To hell with Columbus’s land!”

And there is no immigrant more ridiculous than the un-self-aware variety: the one who thinks he’s all blended in, smooth as lard.

For such a type we turn to: the Old Lady.

The Old Lady is a character dreamed up by Voltaire for his anti-Leibniz novella, Candide. So far, so obscure.

Voltaire at age 70. Engraving published as a frontispiece to Voltaire’s “A Philosophical Dictionary”. London, 1843. (Wikimedia)

But she came back in Leonard Bernstein’s fifties operetta of the same title, with its book by his fellow Jew, the merry Marxist Lillian Hellman. 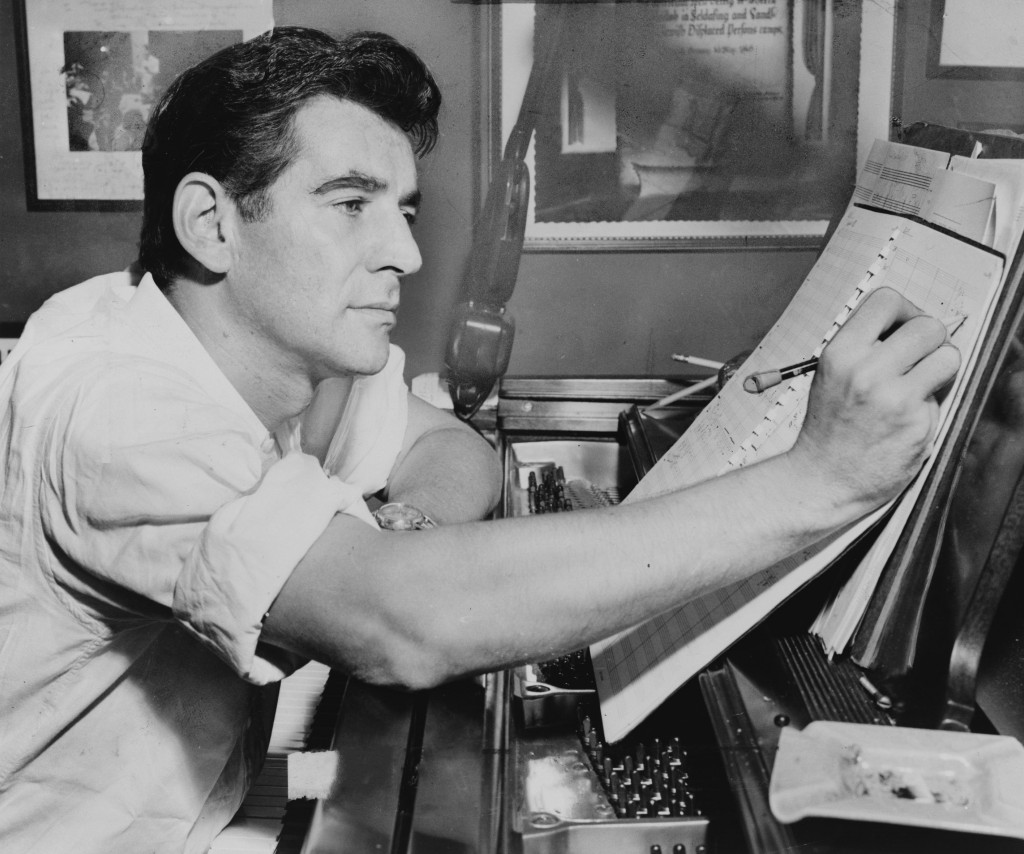 Leonard Bernstein in the 1950s (Wikimedia)

And, this time, the Old Lady shines. 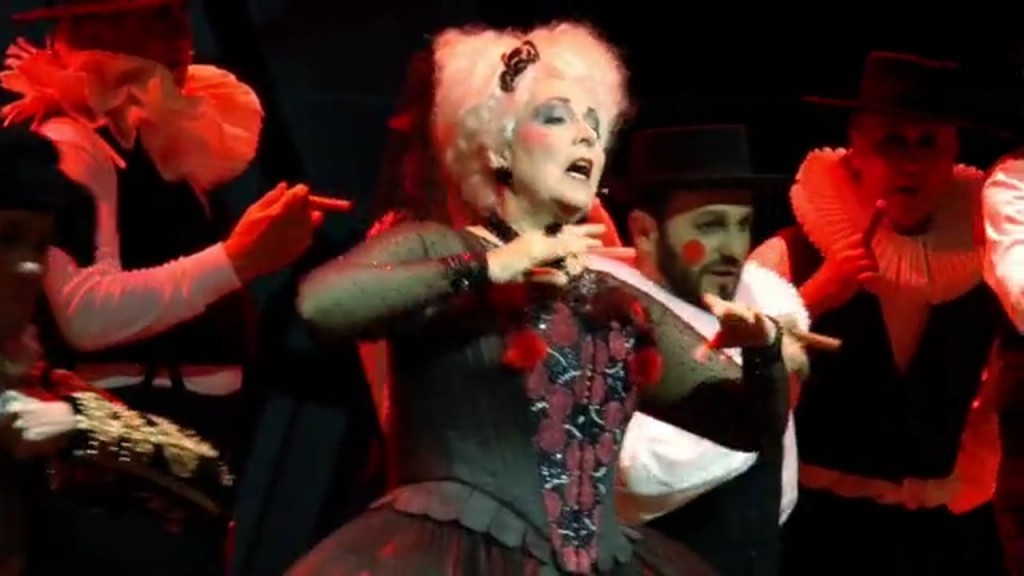 The Old Lady in the 2015 production by Staatsoper Hannover (Screen capture, Vimeo)

Bernstein wrote a song for her called: “I am easily assimilated.”

It is, of course, written by a Jew. One who knew something about uncomfortable displacement. It is also sung by a Jewish character: a woman living in Argentina who dances the tango while singing a song of her Ukrainian self.

And she is ridiculous. But she is resilient, too.

I never learned a human language.
My father spoke a High Middle Polish.
In one half-hour I’m talking in Spanish:
Por favor! Toreador!
I am easily assimilated.

The joke, of course, is: you don’t sing a tango like a nigun if you’re assimilated.

Yet this immigrant is smart, in her way.

She has her weapons: louche optimism born of the necessity to keep things moving along. Zany hope that no danger, no unknown force will befall her that cannot be outplayed by an arched eyebrow, a joke or a plea for sympathy. Trust in the power of pathos and the well-placed theatrical gesture. Persistence undying.

I know how this lady operates. I do the same.